10 Great 1980s Thrillers That Might Have Fallen Under Your Radar

The 1980s produced a lot of thrillers. Many of them received critical and commercial acclaim. However, to really stand out during the decade, a thriller had to possess something special.

Maybe that was a box office star who was at home playing the conventional male hero (like Bruce Willis in Die Hard or Sly Stallone in First Blood), an injection of comedy or horror or science-fiction (Beverly Hills Cop, The Hitcher and RoboCop respectively) or maybe the commercial success of a 1990s sequel (Silence of the Lambs) to remind everyone to watch the 1980s predecessor again (Manhunter).

The best thrillers of the 1980s

The fact the thriller movie was a go-to genre for Hollywood during the decade meant audiences were treated to an almost endless stream of captivating works featuring psychological suspense, red herrings and Hitchcockian dramatics, murder-mystery, wronged men and femme fatales, espionage and corruption, paranoia and political intrigue, good cops and bad cops, and lots of a lots of twists and turns. But understandably some films have risen above the rest to remain rooted in our consciousness.

Audience favourites from the decade that are still as popular today include Fatal Attraction with its sizzling, steamy sex scenes, and the wonderfully suspenseful volatility between blackmailer (Glenn Close) and blackmailed (Michael Douglas). The film’s notorious bunny-burning scene has also become ingrained in popular culture. 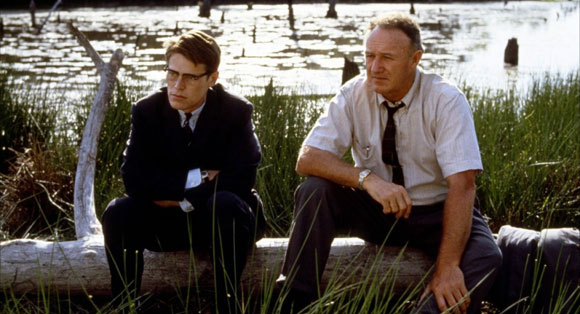 1980s thrillers that might have fallen under your radar

Here we celebrate the also-rans; 1980s thrillers that don’t enjoy the recognition or notoriety of Mississippi Burning, Jagged Edge, War Games, Frantic, The Vanishing, 48 Hrs, The Untouchables, or Blood Simple. There’s no Eyewitness, Thief, House of Games or To Live and Die in LA in sight. Instead, we’re concentrating on the little-seen gems that might have fallen under your radar but deserve your attention.

Director John Flynn has never been one for subtlety and Best Seller is another indication of his penchant for over-coating the drama to wring out every bit of emotion. It wears off on actor James Woods who’s uncharacteristically hammy – a reason, perhaps, why Best Seller has fallen out of sight – but which only sporadically impacts the work this brilliant performer.

The story of a retired hit-man named Cleve reaching out to detective-turned-novelist Dennis Meechum (Brian Dennehy) to write his memoir and, in turn, bring down corrupt businessman – and Cleve’s former employer – David Madlock (Paul Shenar), is a far-fetched one that never successfully reels itself back into reality. But the premise – antagonist-turned-protagonist, villain seeking absolution – is a compelling one, as is the sense that Cleve, for so many years cut off from conventional normality, is simply seeking the one thing he’s never had: friendship. 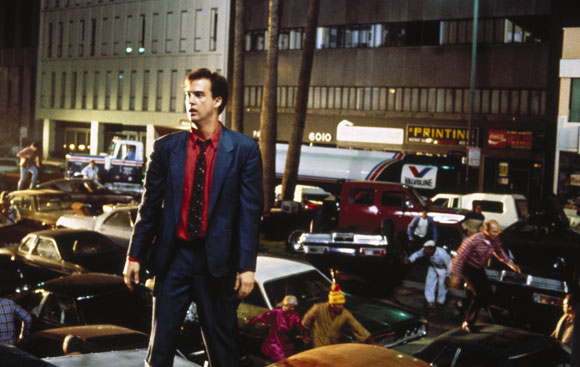 Now a bona fide cult classic, Miracle Mile has grown in stature despite being largely unavailable to audiences for years. Rather, it’s a double bill favourite for arthouse cinemas exhibiting late night throwbacks to movies with apocalyptic overtones. And its forgotten status has fanned the flames of its cult existence.

Told over the course of one day and night as Harry (Anthony Edwards) tries to find love interest Julie (Mare Winningham) hours before nuclear war is set to break out, Miracle Mile represents an alternative love story, exampling how tragedy in an apocalyptic thriller can accelerate the machinations of romance.

Jarnatt combines his chief protagonists’ blossoming adoration with a separated older couple settling differences to spend their possible last moments together. Harry, an everyman with a good conscience, carries the story. He’s an engaging character and the actor gives him heart and a fragility that makes us care. This permeates the paranoia to leave us with a film that, while not being entirely dramatically successful, leaves a bad taste that’s oddly satisfying. 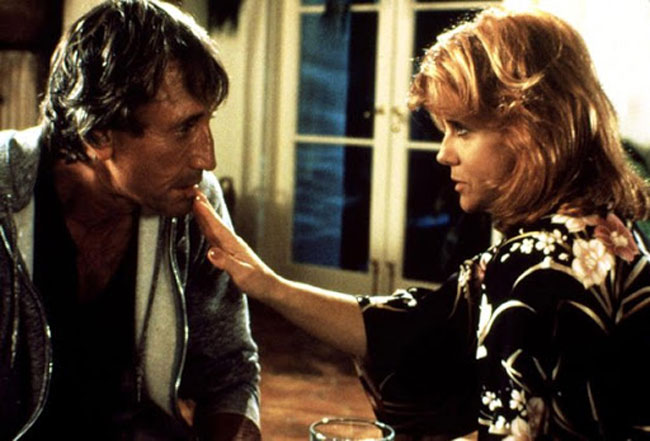 Ticking along to the pounding electric guitars and keyboards of Gary Chang’s underrated score, 52 Pick-Up is a down and dirty crime thriller like only writer Elmore Leonard can tell. Similar to the more recognisable films to have originated from the pen of the novelist, such as Get Shorty, Jackie Brown and Out of Sight, this John Frankenheimer-directed effort from 1986 turns over the rock from under which some decidedly nasty deeds are taking form.

Even our protagonist – successful businessman Harry Mitchell (Roy Scheider) – has skeletons in his closet. Indeed, he’s been a very naughty boy. When blackmailers use his affair with the nubile Cini (Kelly Preston) to demand monthly cash payments for the rest of his life, he’s stuck between exposing his misdemeanours and possibly losing his wife (Ann-Margret) and destroying her political aspirations at the same time or accepting defeat and paying the money. But perhaps this trio of reckless criminals have picked the wrong man to target. And soon enough, not only have the stakes grown, the tables begin to turn.

Cold War tensions collide on British soil as a KGB assassin (Pierce Brosnan) is sent to blow up a military airbase. Source novelist Frederick Forsyth’s twists and turns are smartly constructed on-screen by director John Mackenzie who favours a fast pace and slight-of-hand to logic or seriousness. This is perfectly framed by Michael Caine’s ultra mild-mannered MI5 agent whose unflustered nature is entertainingly offset by a brawler’s mentality when called for.

While the British agent is easily rooted for, Brosnan’s Petrofsky is conversely terrifying. The killer’s lack of remorse is one thing but the cool, calculated method of his misdeeds shows intelligence beneath the monster making him a decidedly nasty proposition. Indeed, it is Brosnan’s performance that promotes The Fourth Protocol from being merely throwaway entertainment into something of substance.

The Fourth Protocol is undeniably entertaining.  It might be weaker than Forsyth’s much-celebrated The Day of the Jackal in cinematic terms, but it’ll still ignite those same fires in audiences who enjoy the writer’s work on-screen. 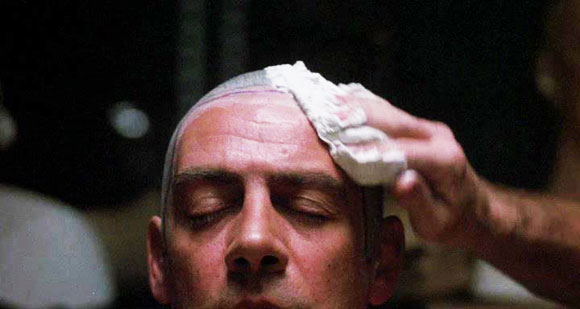 Bryan Brown plays Tyler, a special-effects wizard who after his latest movie is asked to perform a fake assassination for the Justice Department. However, not all goes to plan as Tyler is framed for the murder that he thought he’d faked, and after narrowly escaping death himself, has to use all the tricks he knows to evade those who want to silence him and the police who want to arrest him.

Director Robert Mandel’s film is all about the magic of movie-making. Its murder-mystery plot is the perfect conceit to centre the action around. And as Mandel pushes the film along at breakneck speed as the “who does it” in the film business tries to figure out “whodunnit” in the criminal world, F/X is formed into a rather wonderful late-night entertainer. 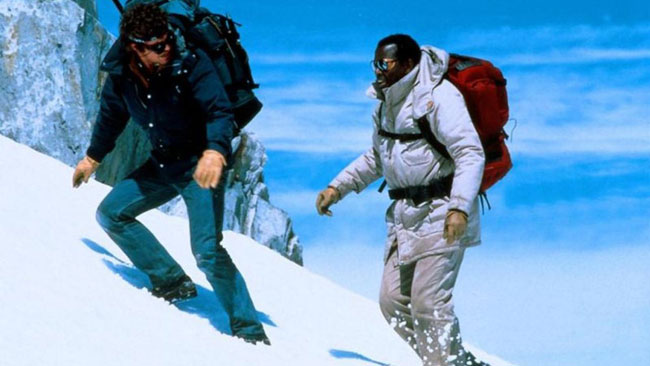 Better known in the United States as Shoot to Kill, Deadly Pursuit is arguably director Roger Spottiswoode’s best film alongside Under Fire. A return to the big screen for Hollywood legend Sidney Poitier probably aided its box office too.

Distinctly told in three parts, the plot may feel episodic but each “chapter” possesses its own set of treats. The psychological terror of its opening salvo, the cutthroat tension between cop and criminal reminiscent of some of Manhunter’s haunting set pieces from 1986, makes way for a mountainous foot chase in its second act when a delightful injection of “whodunnit” adds mystery to propel the action.

Then we return to civilisation, an urban backdrop putting Stantin in his comfort zone and allowing his inner Hercule Poirot to emerge leading to a brilliant twist that bursts the bubble of an egocentric diamond dealer.

Parading half a dozen stylistic influences, Dead of Winter’s component parts don’t quite match-up harmoniously – a sign of the numerous directors who worked on the film – yet this hammy thriller boasts a distinct charm that’s most obviously witnessed in the game performances of Mary Steenburgen and Roddy McDowall.

Curiously arriving the same year as Stephen King’s novel Misery which shares some of the film’s traits, credited director Arthur Penn’s chilling tale sees Steenburgen’s Katie McGovern find herself at the whim of Dr. Joseph Lewis (Jan Rubes) and his partner-in-crime, Mr. Murray (McDowall), who use her as a pawn in a deranged blackmail plot. 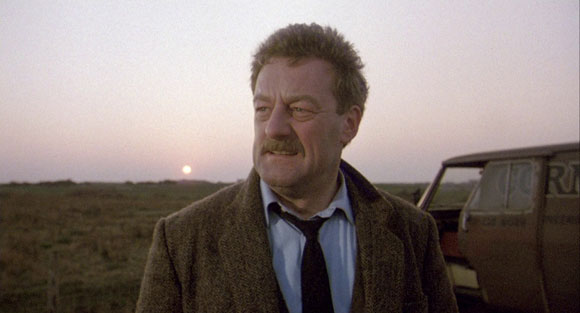 Bellman and True begins with Bernard Hill’s surrogate father-figure on the run with a child, referenced only as The Boy (Kieran O’Brien). They are discovered in a London hotel by a pair of gangsters who bring them to the safehouse of Salto (Richard Hope), an unscrupulous money-man preparing for a lucrative bank robbery.

Hill’s computer programmer Hiller has seemingly had second thoughts having wilfully got himself involved with the criminal gang. He had stolen information about a bank’s security system with the intention of selling it but is now forced to decode the information while being held captive.

The film isn’t remembered with the same sense of admiration that greets other British gangster films of the 1980s (Mona Lisa, for example) but there are snippets of greatness here which are highlighted by Hill’s compelling performance and a handful of moments when the director’s skilful set-pieces and caffeinated pacing meet writer Desmond Lowden’s clever plot devices. 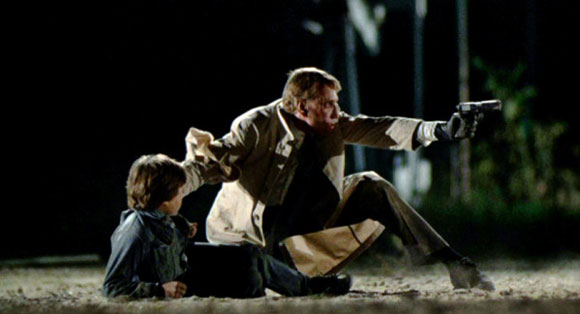 Eric Red’s directorial debut Cohen and Tate turns the buddy road movie upside down. Its focus is on the bad guys as they traverse the highways of Texas with their prey, a precocious nine-year-old boy who is being taken to a mafia family after witnessing a mob killing. Red, who’d won cult acclaim for his screenwriting work on Kathryn Bigelow’s stripped-down vampire horror Near Dark and Robert Harmon’s road rage thriller The Hitcher, had earned the right to develop his own project, ultimately showcasing a talent for direction in this tale of antagonist-as-protagonist.

Thanks to the sure-footing he gets from Hollywood legend Roy Scheider, Red’s suspense thriller maintains a credible presence despite the odd moment of camp courtesy of the more straightforwardly realised characters of Tate and child captive Travis. Adam Baldwin’s hothead hitman whose penchant for blood and gore constantly tries the patience of his partner, is more one-note than Scheider’s veteran Cohen. The fly in the ointment is Travis, a pleasingly resourceful pre-teen played by Harley Cross who does a commendable job despite not quite grasping the subtle changes in tone required by Red’s freewheeling screenplay.

Steve Guttenberg stars in Curtis Hanson’s absorbing Hitchcockian thriller, The Bedroom Window, based on Anne Holden’s novel, The Witnesses. A sort of Ryan Reynolds of the 1980s, Guttenberg’s star couldn’t be brighter when he took the lead here, the New York-born actor hot property after scoring a string of hits with Cocoon, the Police Academy films, and Short Circuit. Box office smash Three Men and a Baby was also released in the same year. Distinguished by a slightly more reserved approach to his character Terry Lambert in The Bedroom Window, Guttenberg reveals his dramatic chops are nearly as effective as his previously characteristic comic everyman neurosis.

The Cary Grant of this particular “wrong man” motif, the man who announced himself in film as part of the Diner ensemble, finds himself at the centre of a serial killer investigation after falsely coming forward as a witness in an attempted rape case. Trying to do the “right” thing, and appease the beautiful Sylvia Wentworth (Isabelle Huppert), the wife of his boss who he happens to be having an affair with, Guttenberg’s Lambert tells police that he saw the victim assaulted outside his apartment even though the real witness was Sylvia.

‘Ratched’ review: One of the most famous literary villains gets a plotline we didn’t ask for