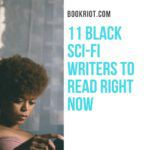 I’m a child of the ’80s so it’s almost expected of me to love sci-fi, which I do. I love time travel, aliens and teleportation. Science fiction is one of my favorite genres because it pushes the imagination, in a logical sense. However, mainstream fantasy and sci-fi books are overwhelmingly written by cis-het white men and for someone like me, that can be boring. When I was younger, it was hard to find books that had highly advanced worlds and technology comprised of women, minorities and queer characters. I knew I needed more, but I didn’t know where to find sci-fi books that I could envision myself in.

Back in the day, before subscription boxes were all the rave, there was a book club called Black Expressions and the first book I received was Octavia E. Butler’s Kindred. I remember the synopsis being a little vague to me but I gave it a try anyway and after a few pages, I was hooked. It took me a couple of days to finish it and it was the only thing I could talk about. I had to get more.

The more I read, the more I started looking for more Black sci-fi authors. Eventually, I discovered Afrofuturism and that pretty much changed my life. I craved futuristic stories where Black folks were centered.

Over the years, I found new authors to follow and I have expanded my library with a plethora of Black sci-fi authors. The smaller sects within the umbrella genre of sci-fi are where these Black sci-fi authors shine: some authors bridge fantasy with sci-fi while others genre-bend by combining romance, mystery, speculative fiction and historical fiction.

What the authors I’ve listed below are especially good at is using Black diaspora culture to influence how we see ourselves in alternative historical timelines and the future with enhanced manmade powers. If you’ve been wanting to submerge yourself with some Black sci-fi authors, here is your chance.

There are several books and graphic novels you can jump in to, but if you have never read anything by Butler, I would suggest reading Kindred first. She takes you on an unexpected journey of traveling back in time to save her slave-owning ancestor in the antebellum south. I feel like Kindred lays the framework of what you should expect from Butler; science fiction that’s so close to reality that she seems more of an oracle than a writer. It’s a page-turner for sure and trust me, it will stay with you for the rest of your life. The godmother of Afrofuturism will move you in ways you didn’t know was possible.

Who doesn’t love a good space opera? Wilson, who is an unapologetic fan of Octavia Butler, isn’t shy to proclaim her as his biggest influence. Wilson uses space and radical philosophies in the novella Ballad of The Bladesinger. The story follows five mages and their initial journey of failure to be liberated. Now, dejected in space, they are forced to save themselves and every living being.

Johnson is more of a speculative fiction writer and while she might not incorporate all the traditional elements of what sci-fi readers are used to, she creates mystical characters set in different time periods which creates a perfect genre-bending mash-up of historical reference, magic, and environmental disasters as she time travels through the galaxy. Trouble The Saints is her latest and a good starting place to become a fan of her work.

Bayron has a knack for taking stories and fantasy themes we are accustomed to and spinning them in a new, dark way that will make you second-guess whether you actually understood the original concept of your favorite childhood stories. I’m going to recommend Cinderella Is Dead because it is a dystopian, queer, Black feminist novel that follows Sophia who is committed to living her life on her own terms and that includes wanting to smash the patriarchy so she can secure her true love.

An activist, serviceman, lawyer, professor and author, Bell’s short story The Space Traders made a cultural and literary impact. Published in 1992, the story explores critical race theory in a sci-fi setting. Bell examines how white Americans act out of self-interest only. It was also part of a TV series but read the book instead because it’s only 13 pages; you can find it in Dark Matter: A Century of Speculative Fiction from the African Diaspora, an anthology edited by Sheree R. Thomas that includes stories by Octavia E. Butler, Walter Mosley, and more.

Davis has written over a dozen books and has published a number of anthologies. He incorporates Afrofuturism, speculative fiction, and fantasy into his science fiction. Fallen is a perfect example of a sci-fi novel that embraces that genre-bending. It’s part romance, part speculative fiction, but you never feel that the sci-fi is lost. It is a mix of mythology that just happens to have a love story in it. It’s hard to choose a book to start with on Milton, but I like this a lot.

If you are looking for some hard-core, apocalyptic sci-fi then you can start with Sparks’s trilogy. It has the best of what makes sci-fi cool including life on different planets, an alien race set on destroying life as we know it, and human premonitions. The DOME takes you on a rollercoaster ride of living the suburban life in outer space.

Hairston is not just an author but also a playwright, and a couple of her books use the theater as a backdrop. However, don’t assume it’s going to be similar to the television show Glee. She gives readers all of the dramatics along with earth and alien magic. She’s similar to Walter Mosley in some ways, but with more bravado. If you are a fan of The Expanse, you will enjoy Mindscape.

Some find that sci-fi can get repetitive; you have your cool tech and supergalactic space monsters and cool dystopian stories but sometimes realism is just as scary as fantasy. Hopkinson combines familiar imagery with urban settings and explores the complexities of human emotions while adventuring in their spirits. For starters, read Skin Folk and enjoy all the mysticism of Hopkinson.

Moseley, a legend in his own right, has written some of the best crime and mystery novels I’ve had the pleasure of reading, but when he surprises the world with his sci-fi stories, he really brings it. Moseley who also wrote for Star Trek: Discovery, paints dystopian tales in Futureland. Even though it’s a book of several short stories, you get a glimpse of how he bends genres and combines his love for sci-fi, mystery and crime all in one. If you have never read Mosely, this is a great introduction.

The way Shawl writes will make you feel like you missed an important event right before your very eyes. If I had to recommend one book from Shawl, it would be Everfair. Like Octavia Butler, Shawl adds historical fiction to their story and creates an alternative history where they envision continental Africans using steam power before the Europeans. Shawl combines steampunk and Afrofuturism in such a satisfying way, it will make you think to yourself: what if?

Love science fiction and fantasy? Check out this list of Black fantasy authors, too.