A. F. Roberts’s newly released “Blood Light” is a riveting tale of mysticism and spirituality in the lives of a vampire woman and a man of God 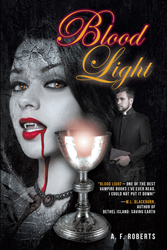 “Blood Light”: an electrifying novel about Charissa, an ancient vampire who crossed paths with Father Christopher, a priest, ultimately shifting their lives in a tangled journey of spirituality and sacrilege. “Blood Light” is the creation of published author A. F. Roberts, an ardent writer of fiction with an AAS degree that lead him into positions of press operation, photojournalism, and newswriting.

Roberts shares, “Charissa is a two-hundred-plus-year-old vampire living and working in Old Town, Chicago, only blocks away from the parish of one Father Christopher, a dutiful Catholic priest whose only real concern is the spiritual welfare of his community. That is until the two meet and are never the same again.

“A chance meeting brings the man of God and the mistress of the night into a strangely symbiotic relationship once she feeds upon him, something she initially tried hard to resist. Soon they are sensing each other’s patterns in odd daydream interludes, building toward a newfound connection neither of them can deny. Before long, Charissa begins to experience Communion services conducted by Christopher as though she herself were drinking the blood the wine represents, and he sees sessions she conducts as a dominatrix, a way she’s learned over the years to feed in a setting conducive to such. Their lives become more and more entangled as each grapple with the interruption this unwanted bonding has wrought.

“Moreover, Charissa’s cannibalistic vampire origins come into the picture when her maker, a cannibal shaman of the Caribbean, throws out his own tangled web in an attempt to reconnect with her after over a century of silence between them.

“Though still struggling with the insanity their insertion into each other’s lives has wrought, Christopher and Charissa find themselves, and her friend Ariyah and her beau Joe, in the middle of a cross-continental nightmare leading them into the still cannibal-infested islands of the West Indies.”

This book depicts an astounding view of when chthonic forces meet the divine and intertwine with overwhelming fervor and mystery no mere mortal can grasp.

Consumers can purchase “Blood Light” at traditional brick-and-mortar bookstores or online at Amazon.com, Apple iTunes store, or Barnes and Noble.

For additional information or inquiries about “Blood Light,” contact the Christian Faith Publishing media department at 866-554-0919.

Why Young Adult Books Still Appeal to Me as an Adult

All About Dune 2020, the Highly Anticipated Sci-fi Movie Starring Zendaya and Timothee Chalamet

Carlo Gébler: ‘Why would you damage a  book? I just don’t get it’