HONG KONG — In a nondescript industrial building in Kowloon, bordered by mechanics and warehouses, an independent Hong Kong bookshop is reemerging from a pandemic-imposed hibernation at a time when words — both written and spoken — are viewed with increasing scrutiny.

Tucked away at the end of an austere corridor on level 27 is Bleak House Books, the warmest of literary worlds that comes with an in-house artist, designated “bookworms” on staff, volunteers and a roster of regular public events.

A mainstay of the city’s literary scene since 2017, when founder Albert Wan moved his family from the U.S. to trade a legal career for the life of a bookseller, Bleak House Books has evolved into one of a handful of tight-knit community spaces that are serving to nourish Hong Kong’s creative and intellectual soul.

Dimly lit and cozy, with maps, notes, postcards and prints adorning the walls — characters from Charles Schulz’s “Peanuts” series appear in various incarnations — this reader’s nook feels far away from the recently introduced national security law that has cast an unsteady shadow over the rest of the city.

“Unfortunately it’s truer every day, how bleak the world is,” says Wan referring to the bookshop’s moniker, taken from Charles Dickens’ 1853 novel. Among the wide range of literary classics and independently published books, Bleak House Books has a healthy selection of novels by British writer George Orwell, an outspoken critic of totalitarianism who Wan says is his favorite writer.

Independent stores are in an increasingly precarious position in Hong Kong these days. The day after the national security law was passed on June 30, the city underwent a physical transformation, with many businesses that had supported the protest movement taking down their colorful “Lennon Walls,” pastiches of spontaneous political expression modeled on the original located near the Central Government Complex. Now what is mostly left behind are the small torn paper stubs and sellotape marks. Wan has not been prepared to shed any literary material just yet, saying that the brief moment of concern when the law was passed has mostly dissipated.

“We still stocked the same books we stocked before, and so did a lot of other indie booksellers that we knew,” says Wan. “We just do what we do. I don’t mean to make a big fuss about the books we stock. We just see what happens.”

While there’s no particular title he considers “totally off-limits,” Bleak House Books would not go out of its “way to stock titles that perhaps have gotten other booksellers in trouble in the past.” But, Wan adds, titles that specifically target “some Communist Party official is not the kind of book we would stock anyway.” Hong Kong has an uneasy past when it comes to booksellers, with the word linked in the public consciousness to the 2015 disappearance of five staff members from Causeway Bay Books, an independent outlet that sold works considered politically sensitive. Chinese authorities later said the missing individuals had been detained in mainland China. The bookstore is tucked away at the end of an austere corridor in a nondescript industrial building in Kowloon. (Photo by Jeremy Smart)

So what exactly are Hong Kong readers interested in these days? According to Wan, whiles tastes remain eclectic, books exploring the realm of human observation and philosophy are popular. “On Tyranny” by Timothy D. Snyder, stands out. And Orwell, of course.

“Every time we stock ‘Animal Farm,’ it sells out,” says Wan, who sees his role as expanding readers horizons through curated offerings. That means titles such as “Nineteen Eighty-Four,” “Animal Farm” and “On Tyranny” will continue to remain on Bleak House Books’ shelves. “To me those titles are appropriate, and I don’t believe illegal, so unless someone tells me otherwise, I’m just going to keep selling the same books.”

Last year Orwell himself became something of a totem for the protest movement, with quotes and book titles adapted into graffiti and banners across the city. Hong Kong library records show the British author’s enduring popularity, with his two best-known novels “Nineteen Eighty-Four” and “Animal Farm” ranked in the top 10 most popular books borrowed this year. Last year they ranked 11th and 12th.

Following the introduction of the national security law, many titles, including those penned by local activists, have been marked as being “under review” on library catalogs, giving writers fewer avenues to reach readers.

Hong Kong’s literary scene has always encompassed something of a do-it-yourself spirit — as indicated by the growing popularity of independently published books. The recent political turmoil has fueled interest in people personally recording the drastic changes reshaping the city’s face, be it through illustration, photography or words. The growing popularity of independently published books is a sign of Hong Kong’s do-it-yourself literary spirit. (Photo by Jeremy Smart)

“I think there’s a growing interest in literature in Hong Kong,” says Wan. “I think in part, in response to what’s going on outside — in the environment, politically. There is a committed group of people in Hong Kong that are interested in literature.”

Beyond selling all kinds of material fit to print, Bleak House Books has also built a reputation as a small public events venue, although the pandemic has pushed those events online, for now.

“I’m not a very outgoing person, so I’m not great with crowds and mingling and all that stuff,” says Wan. “But I think for an independent bookshop, you need to do more than just sell books. If you’re just selling books you’re doing something wrong. Most of the events we have here are events that people ask us to host. We just give them our space and our nice decor,” says Wan. 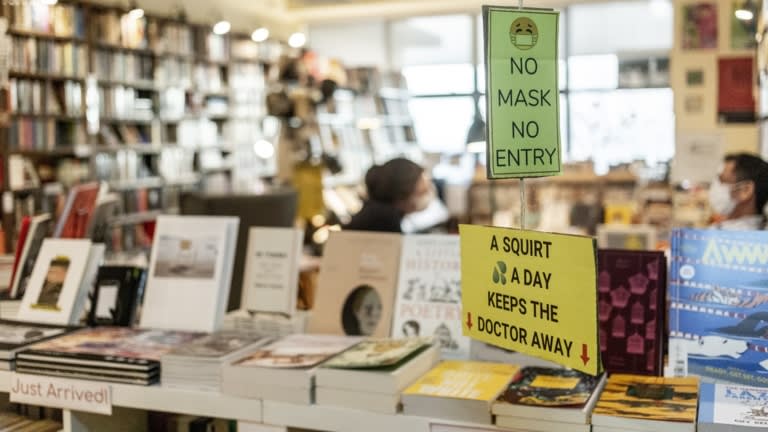 Despite its growing profile in the city’s literary community, and the considerable support the bookshop received from customers during the pandemic thanks to a spike in online orders, Bleak House Books’ future remains uncertain.

For Wan, the big question weighing on his mind is whether he will be in Hong Kong next year or the year after. “I’m always thinking about that. Hopefully, we will,” he says. “It’s hard to plan.”

The thought of a life in Hong Kong without his bookshop makes Wan visibly uncomfortable. “It would be weird. I don’t know if I could handle that,” he says. “The bookshop is part of my existence.” After a pause, he adds: “Maybe you can’t have one without the other. If the bookshop goes, I go.”