A no-budget science fiction film that lives by its wits

Does Jason Momoa Regret His ‘Baywatch’ Past? 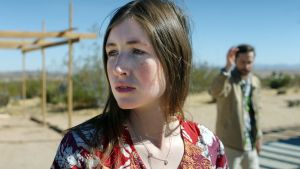 It’s odd watching Amy Seimetz’s second feature as writer-director in the same week that Christopher Nolan’s Tenet detonates in multiplexes. The latter film, between wildly impressive car chases, depends on chunks of explanation and TED talks on the Grandfather Paradox, much of said chatter made unintelligible under Ludwig Göransson’s thundering score.

Writer-director and actor Seimetz, by contrast, doesn’t do exposition. She creates lovely fragments and mysterious moods to sift through and decipher. Her no-budget science fiction lives by its wits and hails from the same innovative genus as Shane Carruth’s Upstream Colour (which Seimetz headlined), Justin Benson and Aaron Moorhead’s The Endless, or David Cronenberg’s Rabid.

She Dies Tomorrow was financed by the writer-director’s acting fees for Alien: Covenant and Pet Semetary. It certainly cost significantly less than Tenet’s 200 gorillion production budget and has significantly more to say, primarily: what if you knew you were going to die tomorrow?


Recovering alcoholic Amy (played by Seimetz cypher Kate Lyn Sheil) has an answer, albeit an unhealthy one. Get dead drunk listening to Mozart’s Requiem on a loop. “It’s over” and “I’m not crazy,” she tells herself. Amy’s concerned friend Jane (Jane Adams) comes to check on her. She, in turn, is infected by Amy’s urgent sense of mortality.

And on we go. Jane visits her brother Jason (Chris Messina) and his wife Susan (Katie Aselton). They are entertaining their friends Brian (Tunde Adebimpe) and Tilly (Jennifer Kim) with some light banter about the sex lives of dolphins. Jane punctures the mood with a definitive statement: “I am going to die tomorrow” and a contagion that soon afflicts the guests.

There are moments when the film’s sustained struggle with death can feel like Bergman’s late lament Saraband. But from the opening scenes, Seimetz and her clever ensemble cast have fun with the weighty conceit and post-Malick somnambulism.

Fellow indie directors Adams and Wingard join Fast and Furious’ Michelle Rodriguez and Ford v Ferrari’s Josh Lucas for their fictionalised last day on earth. A potential patient-zero pizza delivery has led many commentators to hail the film as Covid-19 adjacent. It’s pleasingly wackier than that and, thanks to Jay Keitel’s colourful cinematography, a lot prettier too. It’s a big swing and it’s out of the park. There are many worse ways to spend one’s last 24 hours.  On Curzon Home Cinema, BFI Player and digital download from August 28th.

A Cathartic and Brilliant Teen Rom-Com