All Creatures Great and Small | Critics 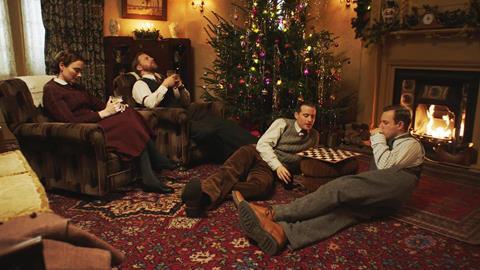 “This is that sort of show — old-fashioned and often as soft as a marshmallow toasted over the fire, but also a vision of England at its humane best. No matter that the Yorkshire Dales looked uncharacteristically blue-skied for the bleak midwinter, this was a perfectly lovely programme to sip sherry to while noting the distinct feeling of having your cockles warmed.”
James Jackson, The Times

“There’s Christmas, and then there’s Christmas in Skeldale, the Yorkshire idyll that is home to vet James Herriot and the squabbling Farnon brothers. The festive special of All Creatures Great And Small turned the Christmas dial up to maximum and shovelled on bucketloads of schmaltz. They should have called this It Shouldn’t Happen To Santa.”
Christopher Stevens, Daily Mail

“If we were to be generous about the BBC’s decision to turn down the All Creatures Great and Small remake, perhaps they thought it was too similar in tone to Call the Midwife. Both period dramas. Various anxious labours followed by squelchy births. But their loss was Channel 5’s gain. And in the absence of festive cheer on BBC One this week – erotically-charged nuns in Black Narcissus aside – this special was exactly what Christmas needed. The only thing wrong with it was that it wasn’t scheduled for Christmas Day.”
Anita Singh, Telegraph

“I love all three Bridget Jones films and this does a brilliant job of digging deep into her world. The timing is perfect. Though people rarely think of Bridget Jones’s Diary as a Christmas film, it is a Christmas film. Darcy’s reindeer jumper reignited the trend for Christmas jumpers before they went mainstream. Ding dong, as Bridget would say. Here, Renée Zellweger opens proceedings by reading from the first book, in that familiar Bridget voice, and it sets a comforting tone from the beginning.”
Rebecca Nicholson, The Guardian

“The best thing about Being Bridget Jones was that it didn’t take itself too seriously. We were not asked to consider whether Fielding’s four Jones novels rated as “literature” or mere popular entertainment. And though Germaine Greer did pour cold water on the character’s feminist credentials, this breezy film didn’t get its oversized knickers in a twist over the deeper meaning of it all. The books were simply fun and relatable – and so was this.”
Ed Power, The i

“You may be getting a tad bored of the praise heaped on Hugh Grant 2.0, from his Jeremy Thorpe to The Undoing. However, I’m afraid this review is going to have to add just a bit more — he’s also turning out to be one of the best clip-show talking heads around. Droll and raffish, mischief dancing around his deepening crow’s feet, at the start of Being Bridget Jones he nailed a hitherto unsaid trait of these tribute shows: “You think you’re making an interesting documentary, but all anyone at home is thinking is, ‘F*** me, look how old they are now.’ ””
James Jackson, The Times

“Much like the Christmas story itself, The Goes Wrong Show: The Nativity was heart-warmingly predictable. The premise came straight from Mischief Theatre’s original The Play That Goes Wrong, as members of the fictional Cornley Dramatic Society attempted to communicate the true meaning of Christmas amid fluffed lines, collapsing scenery and malfunctioning electrics. Anyone who enjoyed The Play That Goes Wrong on the West End, or tuned into last year’s The Goes Wrong Show: The Spirit of Christmas, will have seen it all coming miles off. But that didn’t make this disastrous retelling of the nativity any less endearing – watching people fall from a height or attempt to continue singing as their piano catches fire will never not be funny.”
Ed Power, The i

“The look Mary gave the camera, as she proclaimed herself a Virgin, was a wicked joy. It’s surprising how much blasphemy is now deemed acceptable before the watershed — not that it isn’t snortingly funny to see the Angel Gabriel scream ‘Jesus Christ!’ and fall off a ladder. Still, the laughs came so fast that no one could protest.”
Christopher Stevens, Daily Mail

US Turns Down Russian Offer To Help Develop Covid-19 Vaccine