“At a conference in Delhi, Assamese writer Sanjib reimagines the enduring fable of Tejimola, the girl who sprouted leaves. But the English-language literati don’t understand why he doesn’t write about the insurgency.”

This extract from the short story ‘Skylark Girl’ – printed on the overleaf of Assamese writer Aruni Kashyap’s latest collection His Father’s Disease (Westland Books) – speaks of a dichotomy between expectations hinged on a perception from afar, and the métier of a set of people in the face of adversity.

Through a simple story of a stepmother taking the life of her husband’s beloved daughter Tejimola during his absence, and her rebirth in various forms, the fable has held up the wisdom of having grit, of coming alive – anew, of rising from the dead – and of not giving up for various generations in Assam.

If sleepy children sit up in excitement on hearing its stirring twists and turns from their grandmother, adults have tried to find hidden meanings and lessons from the meanderings of the age-old tale.

Therefore, not just Aruni’s protagonist Sanjib is drawn to it, but several creative minds in Assam have dabbled with the idea of Tejimola and created short stories, novels (like in Sahitya Akademi winner Rita Choudhury’s Mayabritta among others), music (Joi and Ibson Lal Barua’s song ‘Tejimola’) and films (National Award winner Bhaskar Hazarika’s Kothanodi) – adding newer sense and significance to the age-old story.

“The Northeast has an iffy relationship with the idea of India. We are often suspicious of Delhi. When Delhi doesn’t treat us well, we feel like Tejimola (step-motherly treatment). We see ourselves in that narrative and derive inspiration and hope from it,” says Aruni, explaining the enduring fascination to the fable, in an email interview.

Talking to The Wire about other topics related to his writing and the recent short story collection in particular, the well-known author-poet-translator, who teaches creative writing at the University of Georgia (Athens, US), also touched upon the mainstream expectation from him as a writer from the Northeast – like Sanjib felt in his short story.

“I used to face such pressure: readers outside Assam expected me to write about insurgency and violence, while readers in Assam have accused me of selling violence,” said Kashyap.

Excerpts from the interview:

Before talking about your latest collection of short stories, I want to highlight that you are a bilingual writer – you have written in Assamese too. However, this ability is getting rarer by the day when it comes to Indian writers. Is this a conscious effort on your part to remain bilingual, or does it come naturally since you grew up reading both regional literature and English literature? 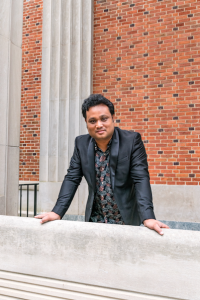 I read in three languages on a regular basis while growing up – English, Assamese and Bangla. Perhaps that’s the reason I borrow a lot from the non-English literary traditions.

Having said that, I must add that my English writing is in constant dialogue with Assamese literature. For instance, the ending of the title story His Father’s Disease is a homage to the ending of one of the most widely read novels in Assam. The first chapter of my Assamese novel Noikhon Etiya Duroit is in the short story collection as ‘The Love Lives of People Who Look Like Kal Penn’.

So yes, I am a bilingual writer in that sense, but the truth is I am an Assamese writer. I am not thrilled when someone calls me an Indian English writer because it flattens who I am.

When I claim to be an Assamese writer, I am claiming a longer, richer, written tradition that goes back to the fifth century and derives inspiration from the poetry of Sankardev and Azan Faquir and Aai Padmapriya and our Bihu and Oinitoms. I am an Assamese writer – but in the most literary and cultural sense, not in a narrow jingoistic way.

Apart from a short story writer and a novelist, you are also a poet. What drives you to pen poetry?

I think my poems are stories in verses. I am at heart a storyteller and I use different genres to narrate stories. I think most creative decisions, such as language, genre, etc. are subconscious. I don’t start writing until I start hearing the lines in my mind. If I hear them in Assamese, it becomes an Assamese poem or story, and so on.  So I can’t really say what attracts me to poetry because the decisions are never conscious.

In this anthology, I see Tejimola coming alive in your creative writing once again. Some years ago, I read another short by you, also called ‘The Skylark Girl‘ where the fable of Tejimola is so exquisitely used. Is there any particular reason you keep going back to the folktale?

I have always loved the folktale of Tejimola but at the same time, we, the people of Assam, are like Tejimola too – we refuse to give up on living, on life.

In our villages, and my experience is limited to Mayong and Dimoriya regions of Assam, I have seen the perennial resilience of the common people, just like Tejimola. Also, the Northeast has an iffy relationship with the idea of India. We are often suspicious of Delhi. When Delhi doesn’t treat us well, we feel like Tejimola. We see ourselves in that narrative and derive inspiration and hope from it. I guess that’s why many Assamese authors return to the folktale of Tejimola.

I am not the only one who has done this. Nitoo Das, Uddipana Goswami and Monalisha Saikia – all these poets and writers have reimagined Tejimola. Novelist Mridul Sharma has written a novel called Tejimola’s Mothers Tale. There is at least one movie on Tejimola.

In that same story, you employ the technique of telling two stories at once. We also see you holding up for readers the oft-noticed tendency to expect from a writer from a conflict zone to write only about it or around it. Have you ever felt pressure, said or unsaid, from readers or publishers like your protagonist did? I would also like to highlight here that like in your earlier novel The House with a Thousand Stories, you weave in life lived in a conflict zone. Is it also that even if a writer from a conflict zone wants to write about other experiences and observations, conflict becomes almost a natural presence?

Actually, the answer is in your question. Political conflict is the most natural presence, along with many other things in Assam. There is a long series of novels and short stories about life in Assam, written by its foremost writes that are violent, about bloody political conflict, and what it means to live there and I am trying to locate myself in that tradition where these questions of what I should write are irrelevant.

Yes, I used to face such pressures: readers outside Assam expected me to write about insurgency and violence, while readers in Assam have accused me of selling violence but I had to ignore them because people who asked this question didn’t know about the long tradition of writing in Assamese that has a place for retellings of folktales as well as violent, topical, bloody, insurgency themed stories.

In the title story of your latest collection, we see you handling homosexuality, a topic I would say not much dealt with in the work of writers from Assam.

This is a misconception: there is a long list of fiction written in Assamese that depicts queer desire and I will tell you about it after talking about the title story a bit.

I wrote the title story, His Father’s Disease, in 2010 when I was living in Double Storey, Vijay Nagar, soon after I had finished my studies in Delhi University. During those days, Vijay Nagar, Indra Vihar, Gupta Colony in Delhi used to be full of students from Assam. We joked that we couldn’t use Assamese slang; that if someone threw a stone from the terrace, it was sure to fall on the head of an Assamese student. We also had an Assamese tiffin-service, run by Lachit-da, who I am still friends with.

There were small shops that sold paranthas till about three in the morning. These places were adda spaces for those who worked late, needed cups of tea to stay up. In one of those shops, I became friends with a young man from upper Assam. He told me about someone in his village who had a relationship with a jawan who was posted there. It really got me thinking.

However, my story is told through Neerumoni’s perspective, and thus in some ways it is a story about a mother who is trying to come to terms with her son’s sexuality. The events in the story happened in our village, Teteliguri, when I was in college. It left an indelible impact on me: on how people with a vendetta could use your private life against you because an archaic law enabled it. When this person was arrested and thrown in to jail, I heard that the mother, who I also happen to know, went around asking the elders in the village to call a phone number that ended with 377. She demanded that the elders in the village find out the actual phone number. It truly broke my heart: the innocence, the horror, and the Kafkaesque situation of it.

But through this story, I also wanted to think about how, in rural spaces, sexual behaviour is accepted and is not attached to identity. I have read depictions of homosexuality in Assamese literature, but in situations that are set in the rural spaces, there is almost no homophobia, but in urban areas, it is palpable. In fact, gay men and women are definitely marginal representations in Assamese literature, but also pedophiles, rapists, deranged, and fetishised, in these depictions. I wanted to write something that wouldn’t dehumanise queer people from Assam. Perhaps, Indira Goswami (Jnanpith awarded celebrated Assamese writer Mamoni Raisom Goswami in Udaybhanur Charitra) is the only writer who has depicted queer desire sensitively in Assamese. In the last ten years, a good number of young Assamese writers have written about homosexual relationships.

Your short story, ‘How to Date a Hindu Fundamentalist’, was recently published by Boston Review. You have said it is a part of your next novel.

Yes, it is actually the opening section from my next novel that is set against rising Hindu fundamentalism soon after the 2014 general elections. It follows a set of characters in Delhi who are liberal, progressive, but their political vision, though sincere and well-meaning, is limited by their class and elite education. I am exploring what it means to love and live during these highly testing times.

You are also in the jury of the prestigious JCB Prize for South Asian Literature, maybe the first from Assam and the Northeast? Also, in the last few years, we have also seen several critically acclaimed books (in English) from writers of Northeast origin produced by mainstream publishers. Have the writers of from India’s borderland arrived in the national or what we call mainstream space finally?

Yes, I am one of the jurors of the JCB Prize of Indian Literature. I suppose no one else from Northeast has been a juror with JCB before.

Jahnavi Barua was nominated for the Frank o’ Conor International Short Story Prize! So, I think my writer friends from Northeast are doing quite well, and have done more than achieve mainstream national attention. They are international!

A Cathartic and Brilliant Teen Rom-Com

Book Review: ‘Mad at the World,’ by William Souder