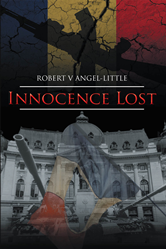 Robert V. Angel-Little, a native Romanian who immigrated to the United States in 1990, has published his new book “Innocence Lost”: a stirring glimpse of life as a schoolboy in Nikolai Ceaucescu’s Communist society in the years before the Romanian Revolution.

“Innocence Lost” sweeps the reader up into the adventures of a boy who, from an unknown entity, manages to become his junior high’s supreme leader, followed by a small transitional period of limited conflicts with the regime’s Secret Service and culminates with the struggles of freedom out into the streets of Bucharest Romania in late December 1989.

The book describes in detail every single thing that the author has experienced during the last six years of socialism of one of the most brutal dictatorships in Eastern Europe. Every aspect of schooling, education, military training, battlegrounds, and personal private life of the author has been described in order to let the readers know what could happen or could have happened if they were to live in socialism. The book also describes Romania’s history, economics, cultural, and social life along with some of the author’s favorite vacation spots.

Robert V. Angel-Little gets elected to lead the masses of pioneers (students) and works tirelessly to consolidate his position not only as a feared leader, but also as a trustworthy person within his community. After he resigns his duties as junior high leader, he enrolls into the country’s National Guard program and takes his admission tests at the high school of his choice. At both institutions, he comes into an open conflict with the elite forces of the Secret Service, who plays its part similarly to Nazi Germany’s state police, the Gestapo.

As both good and unfortunate events take their courses, the author and his friends manage to survive both institutions at great costs: the disappearances of some friends and also expulsions from both institutions. The latter, along with all the other mishaps that took place in the past, has been the trigger point of revenge of both the author and his friends which culminates with their actions during the late December 1989 Romanian Revolution.

“Innocence Lost” is a boy’s testament to the world and is dedicated to all those who have lived and died fighting for freedoms from the clutches of socialist and communist oppression.

Readers who wish to experience this engaging work can purchase“Innocence Lost” at bookstores everywhere, or online at the Apple iTunes store, Amazon, Google Play, or Barnes and Noble.

For additional information or media inquiries, contact Page Publishing at 866-315-2708.

Page Publishing is a traditional, full-service publishing house that handles all the intricacies involved in publishing its authors’ books, including distribution in the world’s largest retail outlets and royalty generation. Page Publishing knows that authors need to be free to create – not mired in logistics like eBook conversion, establishing wholesale accounts, insurance, shipping, taxes, and so on. Page’s accomplished writers and publishing professionals allow authors to leave behind these complex and time-consuming issues to focus on their passion: writing and creating. Learn more at http://www.pagepublishing.com.

‘Lovecraft Country’ Episode 7: 5 Things You May Have Missed in “I Am”

Hey, bookworm! Save $20 by getting 2 months of Kindle Unlimited for free