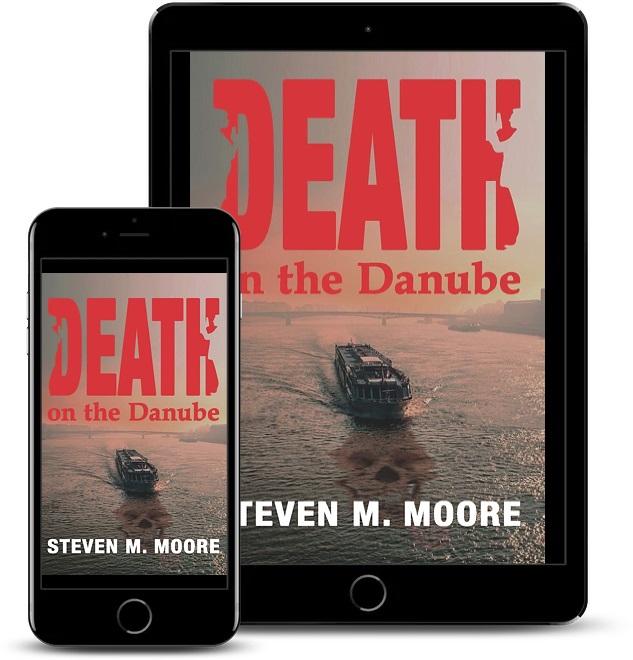 Death on the Danube

Author Steven M. Moore is pleased to announce the release of the third book in his Esther Brookstone Art Detective Series, Death on the Danube. Released by Carrick Publishing on September 13, 2020, the book is already receiving rave reviews from readers and reviewers. Book one, Rembrandt’s Angel (ISBN: 978-1946409027) was released in May 2017 and book two, Son Of Thunder (ISBN: 978-1950586073) was released in September 2019.

A romantic cruise down the Danube is interrupted by murder.

Esther Brookstone, ex-MI6 agent in East Berlin in the Cold War and ex-Scotland Yard Inspector in the Art and Antiques Division, is on her honeymoon with Interpol agent Bastiann van Coevorden. Their idyllic cruise down the Danube is interrupted when a reclusive and mysterious passenger is murdered. Why was the victim alone on that riverboat filled with couples, in a stateroom by himself? And who killed him? Esther and Bastiann were often called Miss Marple and Hercule Poirot by wags at the Yard, and this addition to the series might remind readers of Christie’s Death on the Nile and Murder on the Orient Express, but this mystery/thriller is very much a story set in the twenty-first century. So tour the Danube with Esther and Bastiann…and enjoy the ride!

Praise for Death on the Danube:
“Steven M. Moore is a master storyteller who creates characters with depth and thrusts them into complex situations. I loved the way the relationship between Esther and Bastiann is written, the great pacing, and the wonderful writing.”—Gobi Jane, in her Readers’ Favorite 5-star review.

Death on the Danube is available for purchase in print and ebook formats.

About the Author:
Steven M. Moore was born in California and has lived in various parts of the US and Colombia, South America. He always wanted to be a storyteller but postponed that dream to work in academia and R&D as a physicist. His travels around Europe, South America, and the US, for work or pleasure, taught him a lot about the human condition and our wonderful human diversity, a learning process that started during his childhood in California’s San Joaquin Valley.

BookBuzz.net helps indie authors, hybrid authors, and small publishers promote and market their books. We also help with book reviews, publicity, and more. Let’s Create Some Buzz For Your Book!!!

This release was published on openPR.

Book Review/ Culture, Politics and the Aesthetics of Living: The Spirit of being a Wanderer

‘Bridgerton’ Season 2: Netflix Release Date & Everything We Know So Far