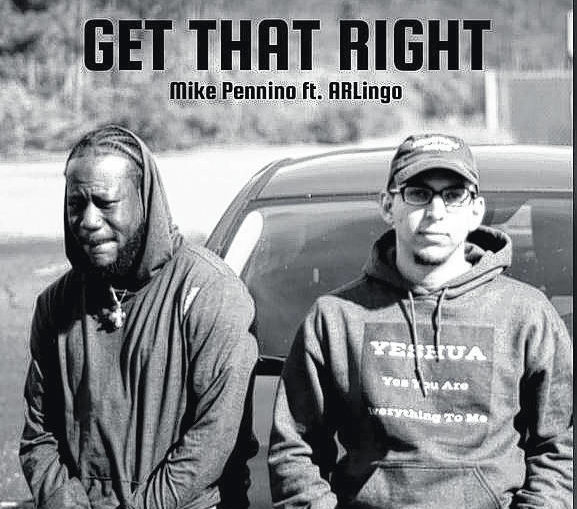 PEMBROKE — A local minister is hoping to reach as many people as possible through his latest hip hop song, titled “Get That Right.”

“Get That Right,” a 3-minute, medium-pace song, is an anthem declaring people should give credit to all God has done, Pennino said.

“The thought process is basically Jesus is my everything, he’s most important so get that right,” he said.

Leading up to the release, Pennino had goals for the song that went beyond making money and appealing to Christians. He wanted the song to reach the ears and hearts of people who don’t know about or who have not experienced Christ. With that in mind, he is creating a “Street Team” to pitch the goal of reaching 1,000 streams on Spotify, not to make money but for the song to catch the platform’s algorithm and reach more people.

“I’m just trying to be more strategic about how to get the message of this music into the people’s ears,” Pennino said. “Personally, what I’ve been learning more about is how music, today, and streaming, it’s more about the experience than selling music.”

Pennino has realized through his own firsthand experience, that his ability to expand his reach to people is more possible through his music than his organic reach.

“I have a story like that where the reason I came to actually trust in Jesus was when I stumbled upon Christian hip hop music on YouTube, randomly, and the more I listened to it, it got me more interested in reading the New Testament, and through reading the New Testament — long story short — Jesus showed me my sin issue, my need for him and I ended up giving up my life,” he said.

Music has been a significant part of Pennino’s life since his high school years when he was more into rock ‘n’ roll as opposed to hip hop. It was during this phase he began writing lyrics.

“Honestly, I was terrible but it was more like a journal — inventing — for me,” he said.

It was the guitar riff in the song “Lose Yourself” by rapper Eminem that changed Pennino’s focus to hip hop music.

“I just started writing, trying to rhyme and that was terrible as well,” he admitted.

Not giving up, he continued to write and perfect his craft, even going as far as buying the book “How to Rap,” which consists of professional hip hop artists giving their expertise on writing, recording and performing in the industry. However, getting a strong dose of constructive criticism was the turning point for Pennino’s writing.

When recording his first mixed tape in Apex, a friend that goes by the rapper name “Oak City Slums,” stopped him in the middle of recording a song titled “Crazy.”

“I was recording and halfway through my verse he said ‘No, you need to go back and rewrite,’” Pennino said. “At first I felt devastated and wanted to quit, but it helped.”

The hip hop artist went back to the drawing board and began listening to artists like Sevin, which helped him with his own lyrics, rhyme scheme and flow.

“I’m very appreciative that he was that willing to stop me, critique me and not care about my feelings,” he added.

Today, Pennino’s music-making process is lots of trial and error, and being confident and true to himself. Before he puts pen to paper, he decides first what the message or topic is he hopes to convey and from there he works to find a instrumental background or beat that fits the mood behind the message.

“From there, I’ll start writing lyrics to it,” Pennino said.

When looking back at old notebooks containing his lyrics, Pennino can see the significant moment when the purpose behind the lyrics began to change for the better.

“When I actually gave my life to Jesus, I could see the lyrics changing — the heart behind it and the motives behind it,” he said.

Pennino began working on “Get That Right” in the summer of 2020.

“I was thinking of a straight rap all the way through,” he said. “I wasn’t thinking about a hook or chorus because of how the beat was, but as I was writing, there was a phrase that stood out to me. It was the “get that right” phrase, and I was like, ‘That sounds like a hook.’”

Before the release of the song, Pennino had modest expectations, but was hopeful.

“One thing I’ve had to learn because I have OCD (Obsessive Compulsive Disorder) is to not hold on to hardcore expectations — be OK with uncertainty,” he said.

Creating music is a “side hustle,” but Pennino would be open to making it a larger part of his life if his music grows.

“If it’s something that God would let me do full time, that would be awesome,” he said.

But, Pennino doesn’t want it to get in the way of his work in college ministry at the Vertical Church.

The hip hop artist will continue to live by the belief that his purpose is to spread the glory of the Lord.

“For me that helps a lot, to take the pressure off of me and just try to be faithful in what I’m doing and trying to be myself and let people experience hopefully through me, the Lord. With my music, overall, that’s what happens.”

He challenges people to study Christ for themselves.

Oscar Wilde Wasn’t Just a Satirist. He Was a Socialist.

Oscar Wilde Wasn’t Just a Satirist. He Was a Socialist.