With the New Year less than two weeks away and the social distancing still going on due COVID-19, one interesting way to spend New Year’s night is by watching romantic movies with your partner. The most suitable option would be to stream the movies on Netflix. The best thing about Netflix is that it offers a wide variety of options to choose from so that you find the movie you want to according to your mood. This list consists of recommendations of all kinds of romantic movies, from tear-jerking drama to hilarious romantic comedies and even sensual movies. So, let’s check the list of best romantic movies to stream with your partner on Netflix this New Year. 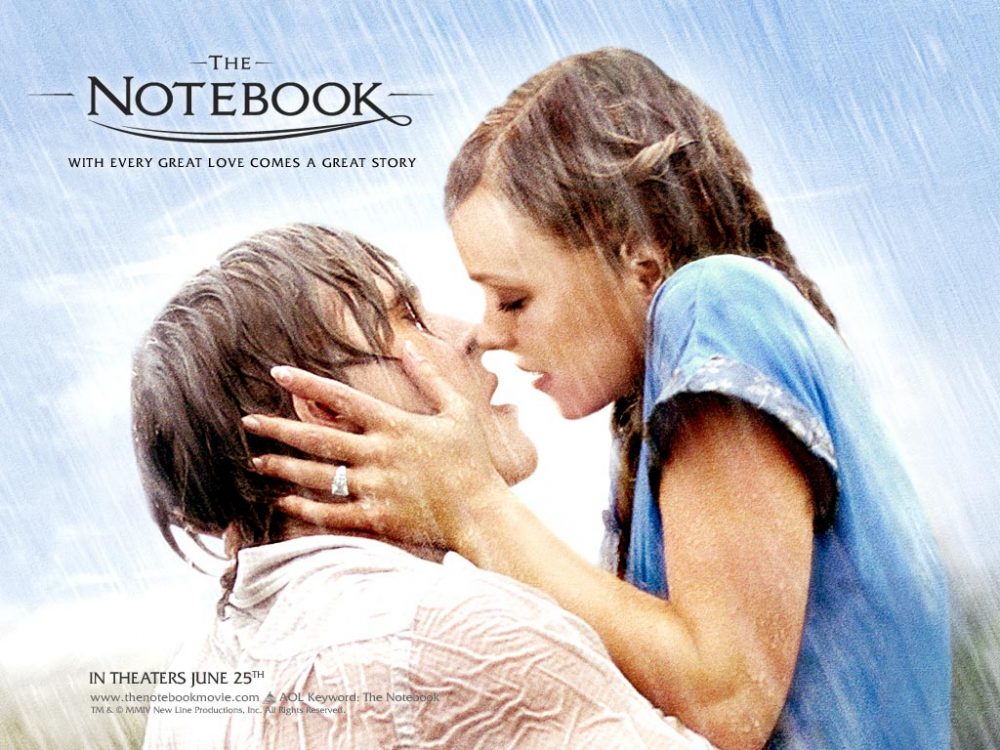 First on the list would be my personal favorite, The Notebook. The movie starts with an older man, Duke, coming to read stories for an older woman. He opens an old notebook and narrates a young local worker who fell in love with a rich girl. This story includes their passionate love and heart-wrenching separation due to social differences. The movie is set amid the beautiful coastal region of North Carolina during the Second World War.

The story is about a young and poor man Noah Calhoun who falls in love with a rich young woman Allie. Raised in a wealthy home with lots of restrictions, Allie found her freedom when she fell in love with Noah. Noah leaves to serve in the Second World War, and with the disapproval of Allie’s parents, the young couple is forced to separate as the differences between them continue to grow.

Now, fourteen years later, the memories of Allie still haunt Noah. He cannot forget their time together but decides to live with the few memories they have together. This changes when Allie returns to the town and meets him. Even though she is engaged to someone, she still cannot forget the passionate summer they shared. Will they get together or again even though the social differences remain? Or will their story be left incomplete forever? 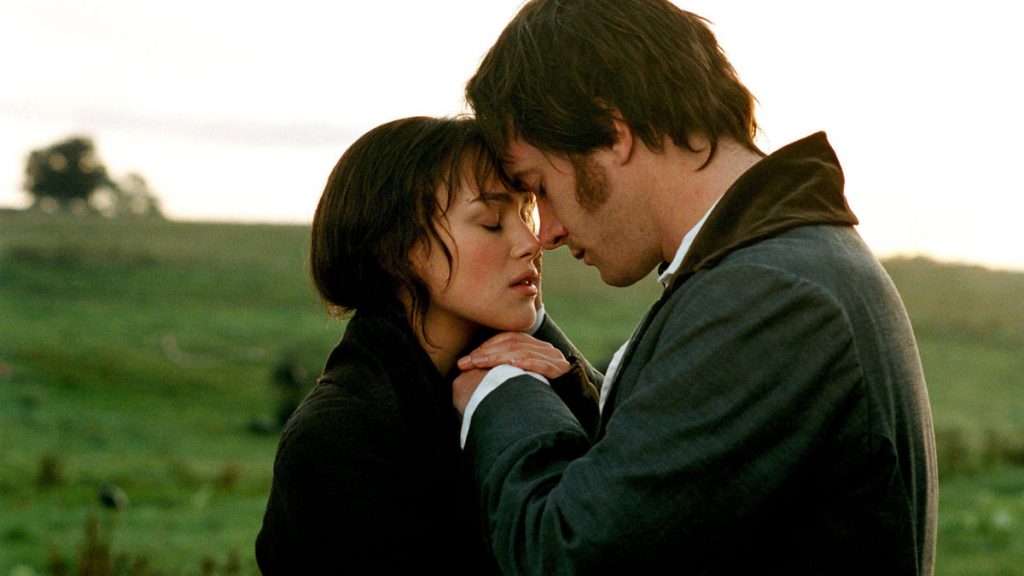 Based on the classic novel of Jane Austen that was originally published on 28th January 1813, the story is set during the Georgian Era of the early nineteenth century. Over the years of so many novel adaptations, this movie still shines even 15 years after its release. The historical setup with Baroque and other European Architecture in the movie makes it a must-watch among those who are into historical romance.

Jane Austen was popular for writing against the social cliches of that time. Her work led to many controversies during that time, though it didn’t stop her from getting famous for her amazing work. Pride and Prejudice are about a young girl Elizabeth Bennet who is not a typical elegant lady and is against the boundaries that society has set for women. She is a bold and confident woman who will not settle for anything less than she deserves.

Mr. Darcy is a silent and aloof rich man who hides his emotions from others. He fell in love with Elizabeth, even though he tried not to. He ended up confessing to her, but Elizabeth rejected him due to some misunderstandings. Even after all that, he continues to help her and her family. Will the misunderstandings be clear among them? 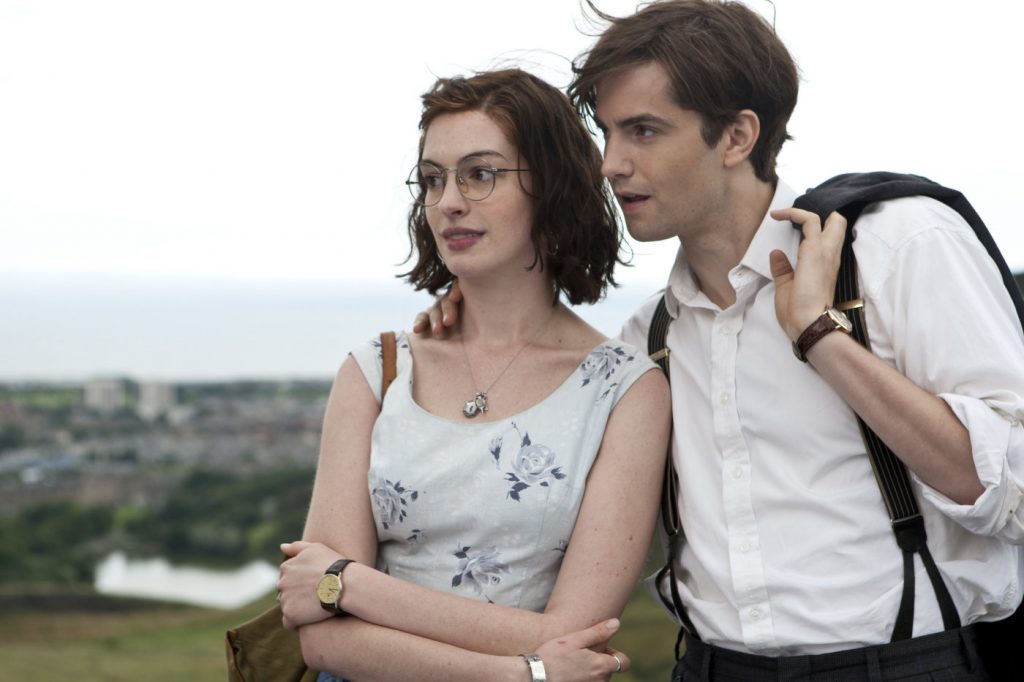 This movie is an adaptation of David Nicholls’ popular novel of the same name. The story is about a young boy Dexter and a girl Emma who spent a night together shortly after graduation from the University of Edinburgh on 15th July 1988. For twenty years, they happen to continue meeting each other on July 15th of every year.

Even though Dexter is a blockhead, success and women come very easily for him, whereas Emma has to work very hard, and regardless of being smart, success still doesn’t come for her. Over the years, they were separated, and after their yearly meeting, they realize that despite meeting new people and having different lives, they are meant to be together.

The movie portrays their story with a hint of comedy and various beautiful places such as Paris, London, and Edinburgh. The film deals with complicated adult life and their struggles. The story briefly shows their life of two decades, where they experience happiness and hardships from time to time. One Day is definitely worth your time. 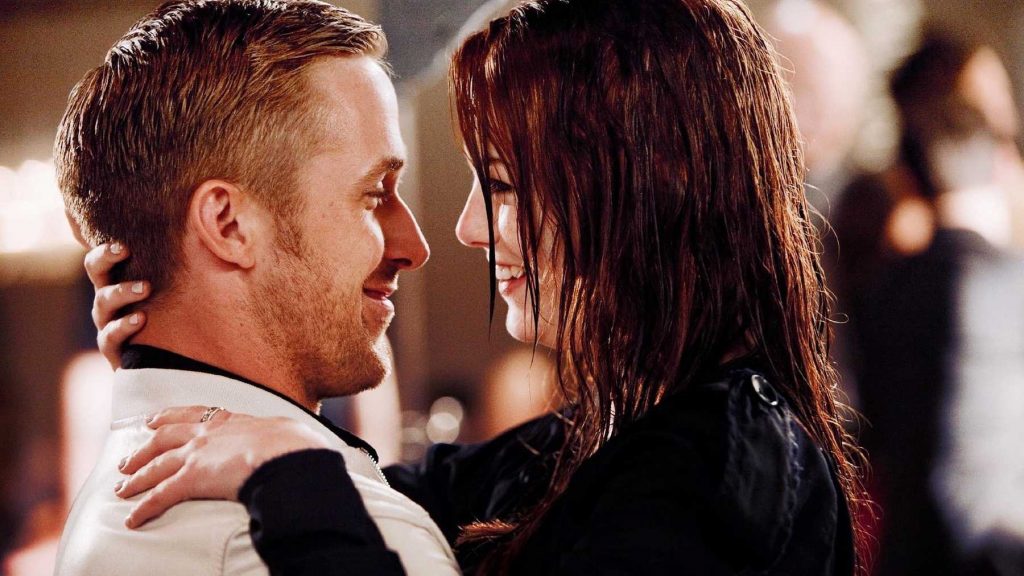 This movie is about a middle-aged man Cal (Steve Carell), who is asked for a divorce from his wife Emily (Julianne Moore). Despite having a perfect life with a good job, a beautiful house, children, and a sweet wife, Emily, his world turn upside down when he finds out about his wife’s unfaithfulness and her demand for divorce. Now, as a 40-year-old single man, Cal wants to indulge himself with bars and women.

Cal seeks help from his friend Jacob (Ryan Gosling), a ladykiller, to teach him how to allure the ladies. Jacob helps Cal with makeovers and lectures on pickup skills. This leads to a series of funny moments in the movie. In the middle of all this, Jacob meets Hannah (Emma Stone) and falls in love with her, which he never thought he was capable of. 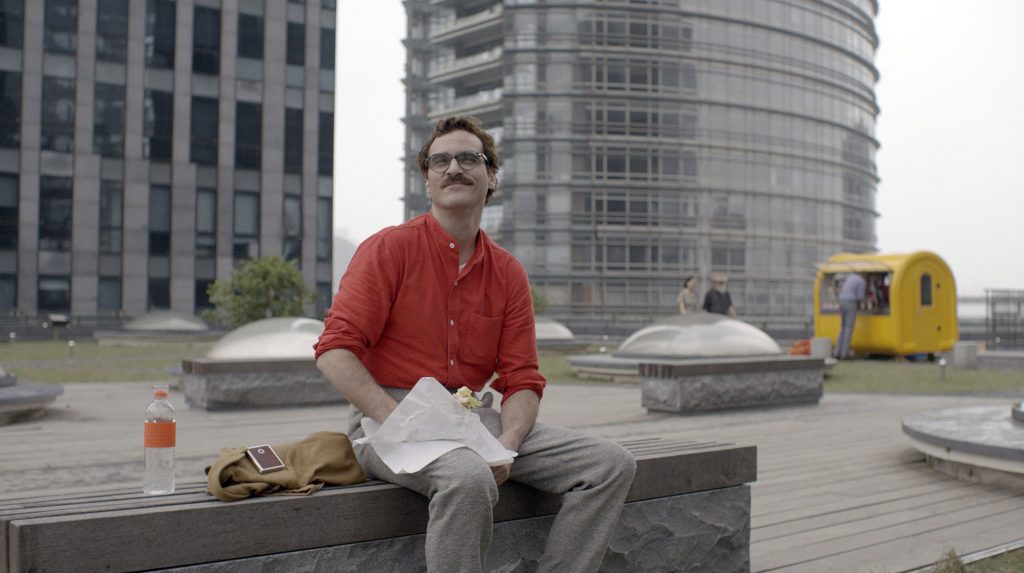 The movie is about Theodore, a lonely and sensitive man who is heartbroken after his divorce. He finds a new hobby as he becomes fascinated with a new operating system, which is artificial intelligence. He draws himself in with Samantha’s cheerful voice, and the two start spending more and more time with each other.

Theodore and Samantha eventually fall in love, but the former is stuck between joy and doubt because Samantha is an OS. Though Samantha helps him deal with his problems, will she help with the fact that he is in love with an OS?

Spike Jonze imagined a near-future set up in Los Angeles where the skies are smoggy, the skyscrapers are glittering, and the mass transit system is more efficient than what we saw so far. The unique cinematography and Joaquin’s incredible acting will keep you glued to the movie till the end. Her won an Oscar for best writing and original screenplay. 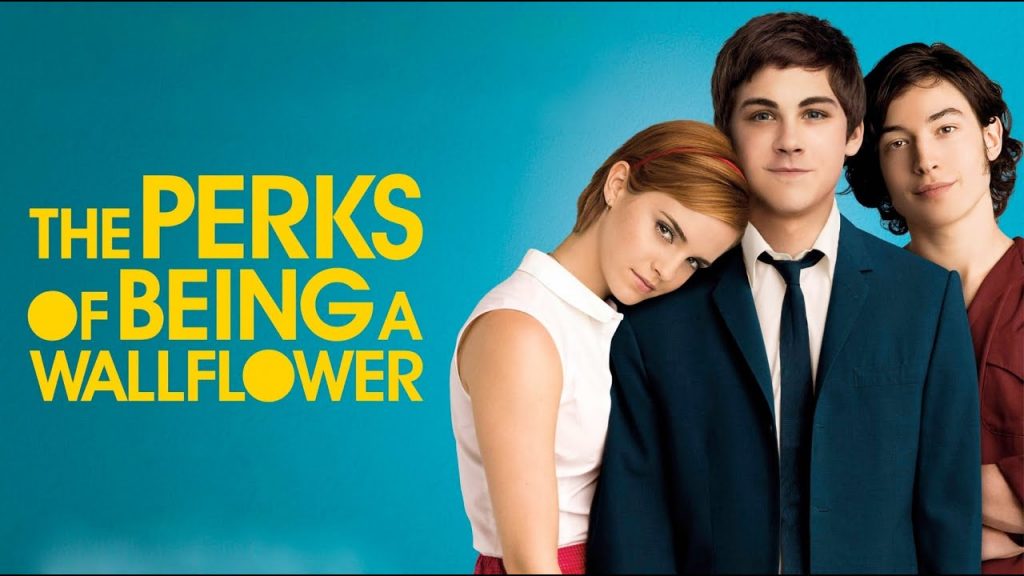 Fifteen-year-old Charlie is a freshman in high school and the narrator of the movie. He is a typical example of a wallflower- an introvert who stays away from the limelight. Charlie is coping with two of his loved ones; one was his only friend in middle school who committed suicide, and the other was his Aunt Helen, who died in a car accident on 25th December, Charlie’s birthday.

As he continues to deal with his mental issues and school life, he meets new people and becomes friends with Sam, who mix him with her friend group. Charlie begins to have a crush on Sam, and they get closer when Charlie confesses to her. Slowly, Charlie can get over his introverted personality. 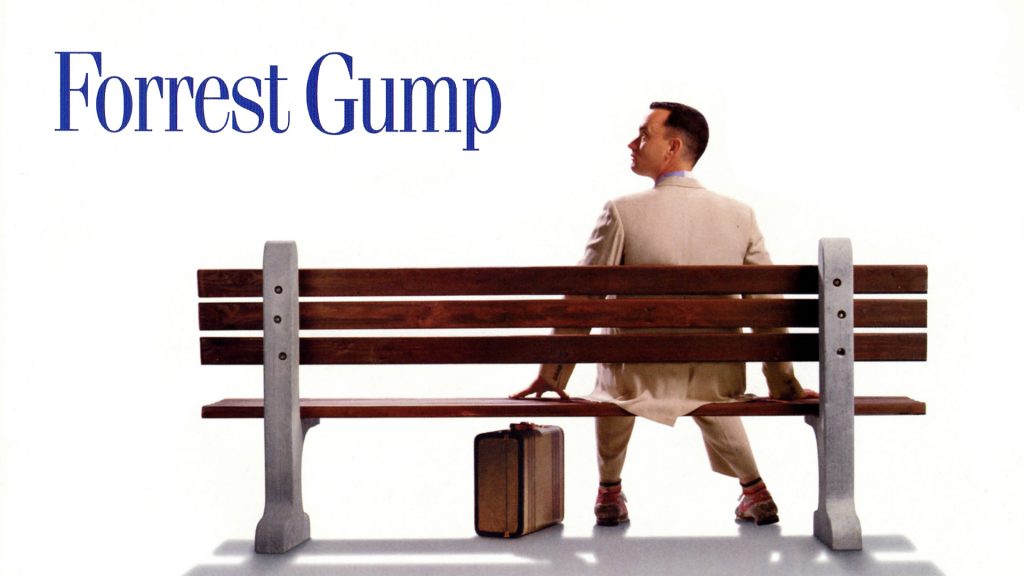 This movie is an adaptation of Winston Groom’s popular novel of the same name. The story portrays the life of Forrest Gump, who has an IQ of 75. Despite having a lower IQ than ordinary children, his mother wants him to lead a boy’s normal life. Forrest is running through his entire childhood. As Forrest grew up, circumstances separate him from his childhood friend and crush Jenny. He dreams of reuniting with her one day.

Tom Hanks narrated the life of Forrest Gump throughout the entire movie. His life is one hell of a roller coaster ride. He serves in the Vietnam War and got medals for his bravery, becomes a ping-pong sensation in the country, creates a famous shrimp fishing fleet, and becomes a millionaire. Forrest even inspires people to jog when he starts running to let out his frustrations.

Forrest reunited with Jenny when he was receiving medals for his achievements in the Vietnam War. Jenny has a messed up life as he gets involved with indecent jobs and toxic relationships amidst her becoming a singer. Forrest Gump received Oscars in 6 categories in 1995. 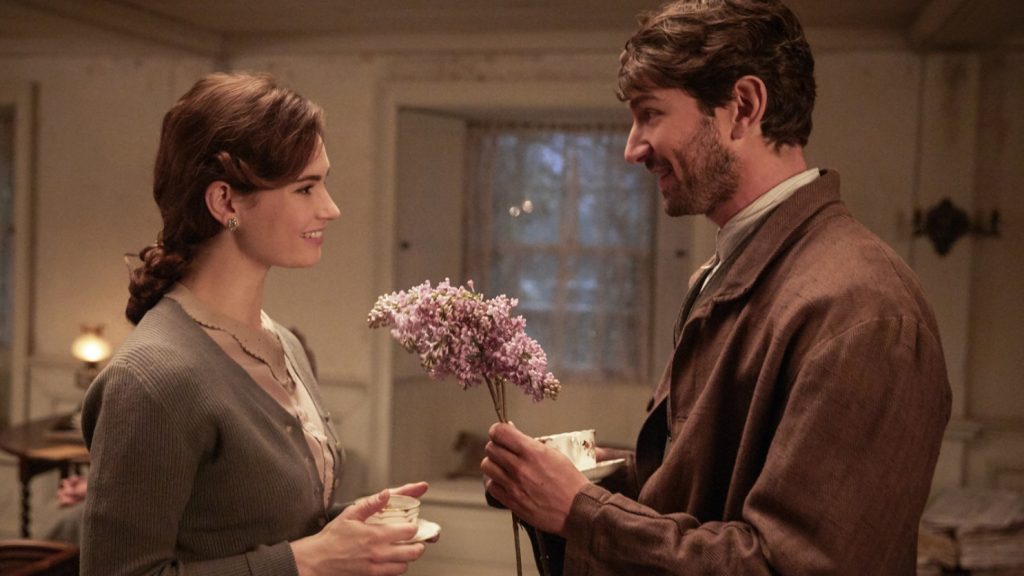 This movie is also an adaptation of a novel of the same name. The story is about 1946 January in London after the Second World War. The protagonist, Juliet Ashton, is a somewhat well-writer who lost her home. She now seeks adventure and starts search for serious topics to write on, unlike her previous humorous works.
She receives a letter from Dawsey Adams, a resident of Guernsey. He writes to her because her books are rare on Guernsey, and he wants to read more of her work. She begins exchanging letters with several residents of Guernsey Island, which was occupied by Germans during the Second World War. Intrigued by those letters, she decides to visit the island.

A series of events leads to the newly established Guernsey Literary and Potato Peel Pie Society. The members read books, debate the books, and forget the dark times during the war. Over the span of several months of her stay on the island, Juliet falls in love with Dawsey. 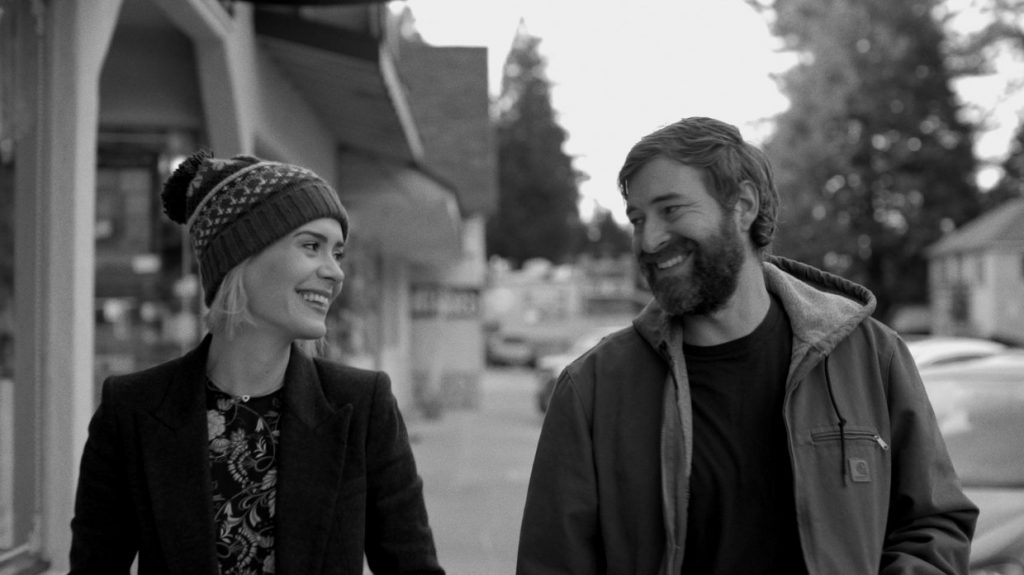 This movie is about a couple who separated twenty years ago. They happen to run into each other in a grocery store, and they catch up and discuss their lives. Jim’s mother dies, and he has come back to take care of his mother’s house. Meanwhile, Amanda has to visit her pregnant sister. At first, things were awkward between them, but then they slowly became comfortable with each other, and before they knew it, they were at Jim’s mother’s house, where they reminisce about their old times.

In his mother’s home, he finds her old letters and tapes they made together. They liven up the tense atmosphere by play-acting their 20th wedding anniversary from a tape. Blue Jay is a gentle and nostalgic movie with amazing acting of the cast. This movie will lead you down a roller coaster of emotions. I believe it is one of those hidden gems on Netflix and is definitely worth watching with your partner. 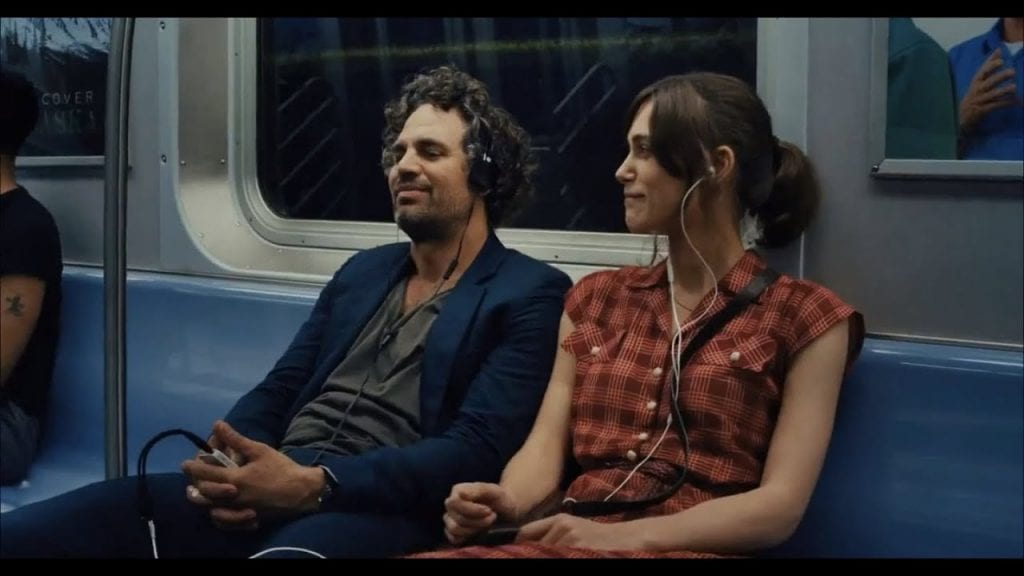 Written and directed by John Carney, this musical drama is just what you need for a festive mood. Gretta and Dave are in a long term relationship when Dave lands a major record deal and starts to get some success. Tempted by fame from his newfound success, he leaves Gretta alone and starts to work independently. The lovelorn Gretta then happens to meet Dan after one of her performances. Dan is a degraded record executive who discovers potential in Gretta.

The story continues as the two start working on an album, and they gradually get close with one another. With a wide variety of cast and a great soundtrack, this movie will surely delight you. Begin Again is a light-hearted movie that you won’t regret watching.