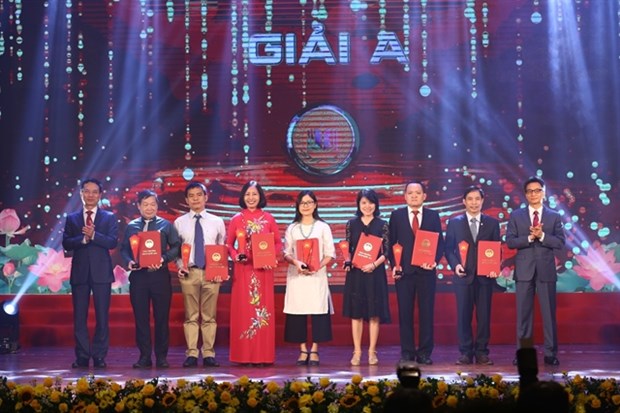 At total of 27 prizes have been given to winners of the National Book Awards 2020 including three first prizes, 10 seconds, and 14 thirds. (Photo: VNA)

Doan Binh Tay Tien was written in 1952
and published for the first time by Kim Dong Publishing
House in 2019. It has just 124 pages but provides a detailed account
of the early days of the establishment of a regiment of the Vietnam
People’s Army called Tay Tien during its westward advance in the
resistance war against the French.

The jury lauded the book for
its authentic literary and historical education values.

Deputy Minister of Information
and Communications and Chairman of the Vietnam Publishers’
Association Hoang Vinh Bao said the research book with its remarkable
literary and historical value had made a great contribution to helping
researchers and literature-lovers understand more about progressive
literature in the period before 1975 when the country was not united.

The awards were announced
at a ceremony held on Friday night at the headquarters of Vietnam’s
national radio station Voice of Vietnam.

He said that books are the
“greatest schools” of society.

“If Vietnam wants to
become a powerful country like many others from the five continents, we should
have a society of study and reading books,” he said.

The Deputy PM highlighted the
role of books in humanity’s great advances and lauded the development of
reading culture in the country.

He stated that the awards have
motivated writers, editors, publishers, and printing and distribution companies
to keep creating good books.

This year, the COVID-19
pandemic, the third National Book Awards attracted the
participation of 48 publishing houses nationwide with 259 titles, covering
many areas of social development.

A total of 27 awards were given
to winning books including three first prizes, 10 seconds, and 14 thirds.

The annual National Book Awards
were hosted by the Ministry of Information and Communications
and organised by the Vietnam Publishers’ Association and the National Book
Prize Council.

The awards aim to honour
writers, translators, scientists and publishers nationwide as well as discover,
preserve and promote books that are valuable to readers.

They are also expected to
stimulate the publishing field.

The awards are presented
in different fields such as politics, economics, environment,
healthcare, science and technology, culture, literature, arts
and children.

Organisers said the awards
attracted the involvement of society, receiving much support from enterprises
and sponsors and were broadcast widely via various media outlets./.

Which Amazon Kindle is the best to buy in 2020?

Which Amazon Kindle is the best to buy in 2020?

This Sex Education star joined the cast for Bridgerton season 2