I bumped into a childhood friend
recently in a bar in Auckland. Ordinarily, I live in
Wellington but I was on my way to Paris to start a new life.
The recent surge in Covid-19 cases in continental Europe has
necessarily put that plan on the backburner. Lily told me
that her mother had written a book and that I ‘ought to
read it. Not knowing what to expect, I came out the other
side with an internal obligation to share what I had read. 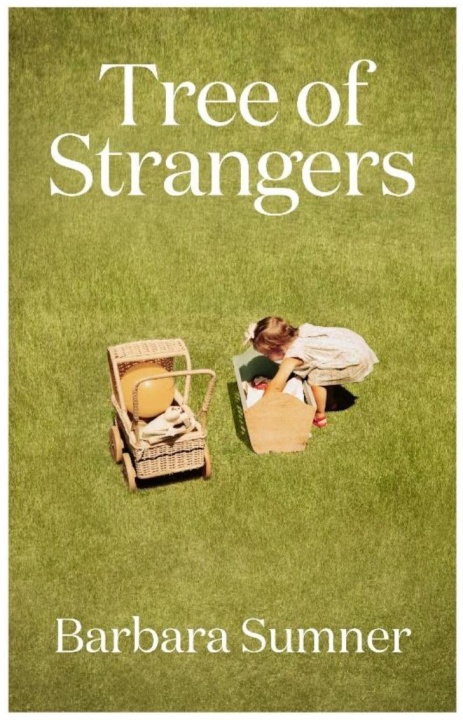 Having previously
worked as a journalist, amongst other things Barbara Sumner
is an award-winning documentary producer. Sumner is a
multi-disciplinary creative and seems to have a habit of
perennially popping up. 11 years after her Oscar
short-listed 2009 film This Way of Life, Tree of
Strangers is Barbara Sumner’s first literary work. Her
newly published autobiography is consistent with her
previous work in the sense that it is exceptional.

Displayed on the front cover is an image of the author
playing alone on a lawn, presumably the backyard of one of
her numerous childhood homes. The photo was taken by her
adopted father when she was three years old, it conveys an
impression of resolute loneliness. Perhaps the perfect
portrayal of Sumner’s fascinating life.

Released earlier
this year, Sumner’s Tree of Strangers is divided
into 27 six-page evocative and deeply revealing chapters
that span Sumner’s life: focusing predominantly on the
period from just before motherhood to her life as a recent
Grandmother living in the Hawkes Bay. Throughout she relates
back to stories of an unusual upbringing marred with
transiency and personal confusion.

Much of the book
focuses on Sumner’s experience of being an adoptee in New
Zealand. Over a lengthy narrative arc lasting years Sumner
recounts her pursuit of her birth parents as she navigates
her way steadfastly through five daughters, three husbands
and a diverse range of New Zealand cities and localities.
Sumner reveals intimate details from her life that I’m
sure validate the experiences of many other adoptees who’s
experience of adoption dates to the period of closed
adoptions in NZ that is now mercifully largely over.

“If our adopting families cut us loose,
we have no legal recourse to our natural parents. No rights
to photos, heirlooms, keepsakes or heritage. Our parents’
death certificates will never list us as their next of kin.
Our children and their children cannot trace their family
trees, except through DNA. We do not exist in the record
books. We do not exist at all, except as misshapen fruit
grafted onto the tree of
strangers.”

Not only is the book
important for understanding how extremely complicated the
lives of adoptees are, it delves deeply into the difficulty
faced by all those closely associated with adoption. Sumner
tells of the troubles she had with her adopted parents,
reminding the reader of what is often an interrupted and
conflicting relationship. She visits and revisits a cruel
propensity certain fathers have towards their daughters,
ostensibly in the name of family pride.

As she tells her
story, she very clearly identifies the cause of the
suffering of those involved in adoption, the archaic 1955
Adoption Act. A policy formed on an ideology that total
disconnection between adopted children and their biological
parents was essential.

“In all, I had
over seventy interactions with government departments. The
result was always the same. Yes, they had my files. Yes, any
staff member could read those files. But no, I had no right
to them.”

Sumner describes a system
that is asymmetrically balanced to focus on the wishes of
adult parents and prohibits the wishes of their adopted
children being honoured. The consequences of this are
grave, incessant fear of rejection, fear of repeated
abandonment among other seriously harmful psychological and
associated consequences.

In addressing the adoption
complex she ties in several fascinating academic studies,
theories and religious perspectives that contribute to and
back up her views about the ills of an adoption system that
has produced so many perpetually grief stricken and lost
individuals.

The book is not entirely about adoption
though. Plaited through the narrative is the story of Sumner
herself. It’s a distinctive and fascinating story.
Passages of her experience as a young woman in New Zealand
offer incredible insight into a fiercely resilient,
ambitious and creative human being. In particular, the
descriptions of her life in Runanga with her first husband
Bruce and their three young daughters provide a window into
a cultural uniqueness that is facing modern day
decline.

Above all else, what makes this book so striking
is its honesty. Sumner speaks unapologetically of a subject
so often swept under the carpet, and she does so with a raw
veracity. I was left with the impression that pursuit of
catharsis is part of the reason Sumner shared this story.
And it is perhaps this quality that makes it such a moving
and impactful read. It certainly doesn’t take anything
away from the work and perhaps will encourage others subject
to similar circumstance to share their experiences and
trauma.

Having read Sumner’s book I far better
understand my mother, who had her child taken from her at a
young age. I still have not and possibly will never meet my
sister. After reading Tree of Strangers, I lent it to my
Grandmother whose brother and nephew were adopted; she read
it in an afternoon and passed it on to a former colleague
who has dealt with similar trauma. Sumner’s story gives
important exposure to an inhumane era in this country’s
history which is gradually slipping away

To enjoy this
book one need not have been exposed to adoption, nor to have
even come from New Zealand. Tree of Strangers is
delightful and accessible to all. Sumner’s life is so
extraordinary that at stages it reads like a novel and is
written with the confidence of someone who is accustomed to
choosing their path for themselves and someone who
understands precisely what they’re talking about.

“I held a sheet of paper to my cheek. It
always starts with paper. We crave the provenance of words
on a page. Of an artwork, an organic apple, a thoroughbred
racehorse. A birth certificate. A family tree. Without
traceability, that artwork loses its value. The apple stays
on the shelf, the racehorse becomes a nag. Provenance is
woven so deep within us, we hardly stop to think what it
must be like to exist without it.

I urge
anyone to read this book, it may well help save a
relationship or two.

20 years of independent publishing is a milestone, but your support is essential to keep Scoop thriving. We are building on our offering with thedig.nz our new In-depth Engaged Journalism platform. Now, more than ever sustainable financial support of the Scoop Foundation for Public Interest Journalism will help to keep these vital and participatory media services running.

Find out more and join us:

Become a member
Find out more

Literary Diary: When you’re writing to the man in red, please choose Irish

Low rate of COVID-19 spread in Utah’s schools, but off-campus activities are a big problem