‘Unsinkable,’ an uneven collection of four short stories, has its points here and there, but isn’t essential reading

This is a collection of four stories about Taiwan featuring four male Taiwanese authors.

The opening item is Lady Wasi by the Atayal writer Walis Nokan. It’s set in the logging uplands during the Japanese occupation and in colorful prose describes the hard life endured by the laborers there, and the measure of relief provided by a female visitor called Lady Wasi. She eventually finds her perfect man, however, and so leaves the other workers notably unsatisfied.

The author is prominent among indigenous writers in Taiwan and known especially for his two story collections, Cruelty of Wars (2014) and Seven-day Reading (2016). 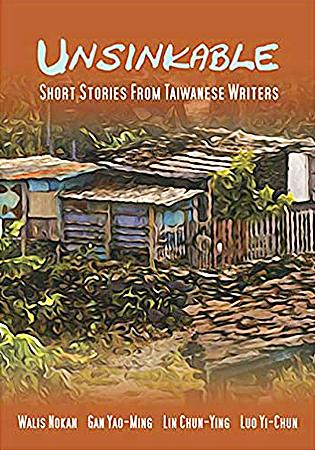 Gan Yao-ming’s (甘耀明) Have a Bite of Ghost couldn’t be more different. Apparently the phrase in Hakka means “stingy,” though in this context it means “too stingy to allow the kids something good.” And the story is about a child who is deprived of a share of a boar’s leg his poor family has somehow managed to acquire. It moves through stages of hunger until finally the leg has become rotten and of no use to anyone.

The aim here is presumably comedy, but to be honest I didn’t find it very funny. But Gan has won many awards, including the Award of Taipei International Book Fair for his 2010 novel Killing Ghosts and First Prize in the Taiwan Literary Award for his 2015 novel The Pangcah Girl.

Lin Chun-ying’s (林俊穎) ABC, Doggie Bites Piggy represents a distinct improvement. It’s set in the period immediately following the departure of the Japanese and the arrival of the Chinese Nationalist Party (KMT). Its subject could be said to be people’s illusions, and it’s unusual in having several allusions to Western literature. H.G. Wells’ The Outline of History, Nietzsche’s Thus Spake Zarathurtra and the opening words of Dickens’ A Tale of Two Cities (“It was the best of times, it was the worst of times, it was the age of wisdom, it was the age of foolishness …”) mix freely with Chen San & Lady Wu and events in Alishan and Kaohsiung. Catholicism, with its visions of the Virgin Mary, vie with suspicions that life under the Japanese may have been preferable to what followed.

Lin’s reputation culminated in his 2018 novel Formosa Heat which won the Taiwan Literature Award for that year.

Sex finally arrives in these tales with Luo Yi-chun’s (駱以軍) Nomad. A group of friends are eating in a Russian restaurant in Taipei, seemingly in modern times. There are few other customers, and certainly none of the Russian aristocrats drinking vodka in the specially chilled basement they expect. Somewhere in the story a lady guest starts to undo the fly buttons of the narrator, then of several other of the men present, with the inevitable result.

Luo’s fame rests on several books, most recently two anthologies of essays, Innocent Worries and Cab Drivers, both published in 2018. He has also won numerous awards, we’re told, but then all the writers in this volume are said to have won “numerous awards.”

One of the people behind Unsinkable is C.J. Anderson-Wu (吳介禎). She has many projects to her name as editor and translator, and was also the author of a set of distinguished stories about Taiwan under the White Terror, Impossible to Swallow (reviewed in the Taipei Times May 9, 2019).

Unfortunately I have a theory concerning the ideal short story, and none of these tales conform to it.

My theory could be called “ironic reversal.” A situation is turned on its head to produce an ending that’s the opposite to what is expected. Let me give you some classic examples.

In Somerset Maugham’s The Verger, a verger (a lowly official responsible for the upkeep and tidiness of a church) is told he can’t retain his job because he can’t read and write. At a loss of what to do, he goes into property development and becomes very rich. A friend comments that if he could achieve so much while being illiterate, what would he have been if he could read and write. He replies that he would have been the verger at his local church.

Again, in Maupassant’s Boule de Suif (“dumpling”) a young prostitute of that name is traveling in a French coach during the Franco-Prussian War (1870 to 1871). The other passengers despise her, but when they are stopped by a German officer who demands that Boule de Suif sleeps with him, they urge her to accept. After she does this and the coach is released the other, bourgeois passengers, return to their disdainful attitudes.

Thirdly, in Oscar Wilde’s The Happy Prince, a statue of a prince looks down on all the misery surrounding him. He orders a swallow to take the jewels that adorn his sword and represent his eyes and give them to the poor. After this has happened the local authorities order the statue to be demolished and melted down as it’s shabby and worthless.

These three classic stories all represent what I call “ironic reversal.” But I’m afraid none of the stories in Unsinkable attain this status.

Of course there are other virtues that the best stories can exhibit, and ABC, Doggie Bites Piggy certainly has atmosphere and comic detail. (This title, incidentally, is a mnemonic meant to help with pronunciation). But by and large these four tales lack bite as well as formal structure. The book also seems rather short at 144 pages — surely there were some other Taiwanese, including some women writers, who could have been included.

C.J. Anderson-Wu could, for instance, have included a story of her own to flesh out this book’s content. Impossible to Swallow contained some fine stories, and I’m certain the author has more in her files that could have been put to profitable use.

Unsinkable, then, though it has its points here and there, isn’t essential reading. The title refers to Taiwan’s diverse population, and how it can’t be defeated by any means. An admirable sentiment, of course.

Anxiety over COVID-19 is negatively impacting Canadian workers: U of T study

Anxiety over COVID-19 is negatively impacting Canadian workers: U of T study