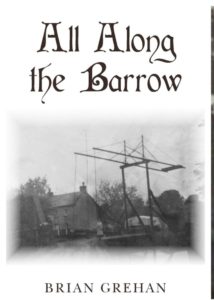 A WORK of fiction that draws inspiration from a much-loved Carlow grandmother and idyllic childhood days spent alongside the River Barrow has just been released. Brian Grehan has just self-published the thriller All along the Barrow, his third book, with all proceeds going to the charity Sightsavers.

Brian lives in Dalkey, Co Dublin but has strong Carlow connections. His grandmother Margaret Grogan was a Carlow native whose husband, Michael Nolan, served with the Irish Royal Rifles in World War I and the couple had one daughter Maeve, Brian’s mother, born in May 1920.

Sadly in 1923, when Maeve was just three years’ old, Michael tragically died from TB at their home in Montgomery, Carlow, which had been flooded by the River Barrow. Margaret later remarried Patrick Mooney and the couple went to live in what was called the soldier’s cottage in Bagenalstown.

Although All along the Barrow is a work of fiction, Brian draws on his Carlow memories and knowledge of the county to set the scene.

“I wanted to include the history of the area and work with that and use that to tell a story; it’s a thriller, but incorporating the history is also what I wanted to achieve,” he explains.

The prologue to All along the Barrow states: ‘Mired in a mid-life crisis, Nancy Hackett returns to her home in Bagenalstown, Co Carlow and soon becomes immersed in a tale of romance, family, murder, mystery and suspense that turns and twists, like the nearby River Barrow, snaking its eternal journey to the sea.’

Brian has dedicated the book to his grandmother Margaret, with whom he shared a very strong connection.

“It was absolutely something I wanted to do for my grandmother. I wanted to write a story where someone would pick up the book and be reluctant to put it down,” adds Brian.

Margaret is buried in St Mary’s Cemetery, Carlow with her son Noel Mooney, and Brian looks after the grave.

Brian has previously written two books – The Leenane Inspector and a book of poetry and prose called Well travelled road, both available on Amazon.

A retired accountant, Brian joined a creative writing group some years ago and was subsequently encouraged to tap into his creative side.

Like his previous books, all proceeds from All along the Barrow (priced at €13) will be donated to Sightsavers, a charity he believes is appropriate in terms of reading and the value of your sight.

Brian had hoped to stock All along the Barrow in local outlets in Carlow town and Bagenalstown, but the increased restrictions in Dublin have temporarily thwarted those plans. However, he hopes to make the journey in the coming weeks.

“Hopefully I will get down to Carlow eventually,” he smiled.

Currently All along the Barrow can be bought from Amazon or you can email Brian directly at [email protected].

The 25 Most Anticipated Science Fiction & Fantasy Books of 2020