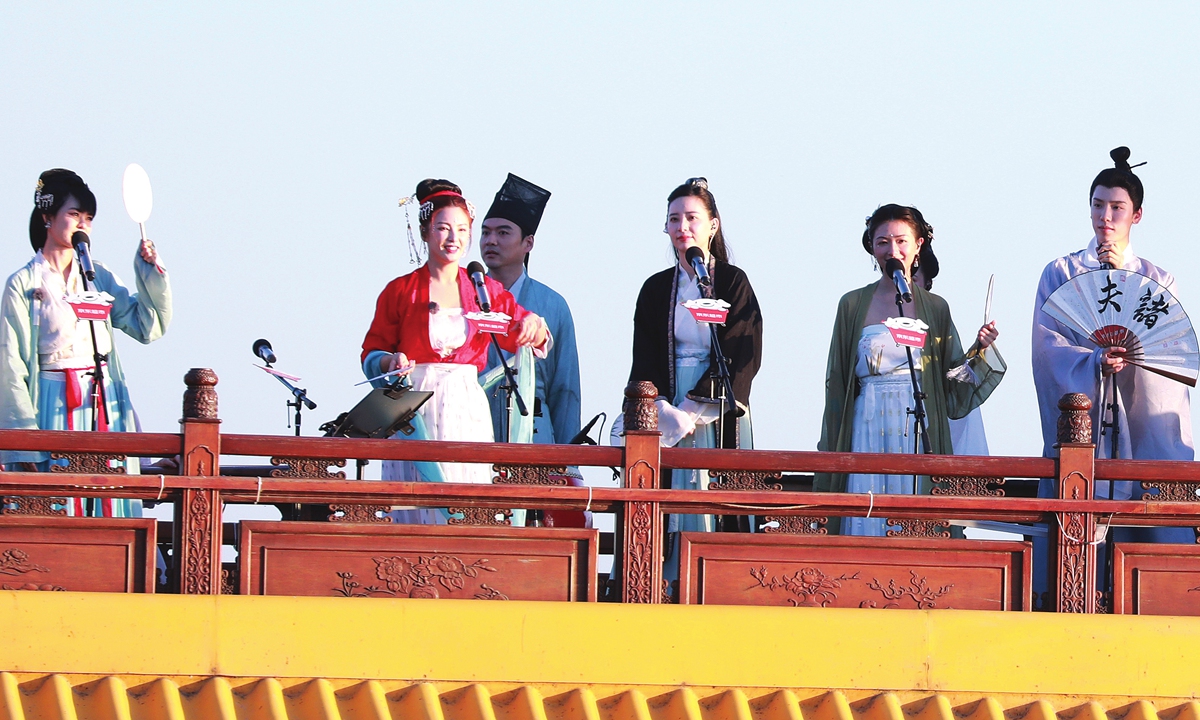 The band performs in the program. Photo: VCG

Chinese variety show Lady Land follows the hit show Sisters Who Make Waves, focusing on the winners of the show who successfully formed a girl band. These female celebrities, all above 30 years old, provide a model for women anxious about their ages, careers and families.

Unlike the tense and competitive atmosphere of Sisters Who Make Waves, Yan Dianya, director of Lady Land, hopes to comfort the female guests and audiences through the show by moving at a slower pace.

Slowing down and hugging oneself is one of Yan’s suggestions for women stepping into a new stage of life, who herself just surpassed the milestone of 40-something.

“Chinese women who are above 30 years old have more chances [than before] and many of them are at the peak of their careers. They are powerful and have a strong desire for success and achieving self-worth, but these endeavors can make them tired and even injured,” Yan said. “So, they need to learn how to compromise with themselves and take a break when running.”

This is what the program wants to convey to audiences.

After strenuous struggles and endeavors in Sisters Who Make Waves, the program sees the band, comprised of Chinese actresses Wan Qian and Ning Jing, among others, travel to various cities for musical roadshows. They explore local music and make friends with local residents during their downtime.

In the first episode, the group went to Quanzhou in East China’s Fujian Province, where they experienced the intangible cultural heritage of Liyuan Opera. A traditional instrument in Liyuan Opera, jiaogu (lit: foot drum), captured the attention of cast member Zhang Yuqi, who had a go at playing the unusual instrument.

In the last episode, the band held a concert in Changsha, Central China’s Hunan Province, to get close to thousands of fans. Audiences screamed and applauded for these female celebrities, impressed by their confidence and brilliant performance.

Yan noted that this is the power of music. Music is another kind of language that can heal people’s souls, as well as help people express themselves.

While on the journey with these female celebrities, Yan found the band members’ attitudes to life inspired ways to relieve anxiety.

“When recording the program, all of them are curious about the unknown and have the courage to try it out, which can preserve a more youthful mental state,” she said.

The related hashtag for the program that first aired on Mango TV in October has earned more than 1.7 billion views as of Wednesday on China’s Twitter-like Sina Weibo, demonstrating the influence of the program among Chinese netizens.

Female related issues have recently gained more attention in the Chinese entertainment and arts industries. The previous show, Sisters Who Make Waves, inviting 30 female celebrities above the age of 30 to sing and dance and show the charm of mature women, became the center of discussion on Chinese social media in the summer of 2020.

A Chinese pop singer in early December released a song named after a typical Chinese woman called Xiaojuan, in an effort to spotlight the pain of women suffering from domestic violence. The song also sparked a storm in a teacup online.

The NYT’s obscene drive to destroy a teen’s life

The NYT’s obscene drive to destroy a teen’s life