With more than $6 million to spend, Arkansas’ higher-education institutions are transforming how they deliver education for the foreseeable future and how easily their students can access it.

All of this comes as the state awaits a reversal in the growing hold the novel coronavirus has on it, with more than 43,000 cases and more than 450 deaths in Arkansas since the pandemic began.

Some instructors are looking outside, through the windows of their isolated spaces, to continue what they haven’t been able to do for months.

Jason Smith, an instructor of trumpet and the Jazz One course at the University of Arkansas at Monticello, anxiously awaits guidelines on whether he will be able to hold band classes outdoors.

Weather isn’t predictable in south Arkansas in the fall, but Smith said the acoustics of nature’s wide-open spaces are better for hearing each instrument. Sound doesn’t echo outside like it does in enclosed rooms, even those designed for music performance, he said.

Smith is thinking about what he can do in the fall. He already knows what he won’t be able to do.

He can’t take his jazz band to the international music conference in Chicago in December — it was one of only three jazz bands invited to perform — nor can he take the musicians on their usual tour of schools across Arkansas. That’s all been canceled.

[CHART: See how much Arkansas colleges got in CARES Act institutional aid » arkansasonline.com/82instruction/]

In the constraints of pandemic-era higher education, when socially distant often means miles and miles away from one another, canceled concerts deliver two blows to music students. They don’t get to perform, and they lose what they’d spent months working toward.

“That has hurt the most,” Smith said.

Music students’ education revolves around performance. Year after year, they practice to compete in hopes of blowing audiences away.

So Smith has to find a new goal for his students, and he thinks he has: recording an album.

He doesn’t have the songs finalized, and he’ll have to keep musicians 6 feet apart, but it’s one way he can adapt and evolve within the new limits.

That’s how faculty members across higher education are having to think about the fall, spring and summer terms.

Arkansas colleges are looking at largely hybrid course delivery to reduce the potential spread of the coronavirus. That will be a mix of online and in-person instruction, with the ability to pivot to online-only if the need arises.

In the past 10 days, Lyon College and Hendrix College have opted to continue remote-only instruction as the fall semester begins. Arkansas’ public institutions remain committed to at least some in-person course delivery.

The transition to remote course work in the spring and on into the summer wasn’t ideal. Faculty members differ on how easy it is to engage with students in a virtual environment.

Some faculty members like having discussion boards online, where students have more time to think about what they want to say.

But Loretta Neal McGregor, a psychology professor at Arkansas State University, prefers to have discussions in the classroom, where students “can sort of think and process in the moment with fewer distractions.”

She’s noticed some students watching television in the background of her live conference-call-style class sessions.

Plus, it’s easier to avoid the points people make when they are posted on a board no one has to read.

“People who already have dogmatic views on something will spend more time arguing their point than reading or absorbing an opinion that’s the opposite of theirs,” McGregor said, noting that is an issue in her field of study. “Political science, history, psychology, sociology — any of those types of classes a lot of students come in with preconceived notions and inaccurate information to begin with.”

McGregor isn’t alone in missing the classroom. She’s heard from students who miss being in a classroom and having an easier time engaging with instructors and asking questions.

“For years, prognosticators have been saying the brick-and-mortar institutions probably were on life support and dying because online education is going to be the way of the future,” she said. “For me, this pandemic has solidified the opposite viewpoint.”

It’s not clear how difficult the transition was in terms of ultimate student success across Arkansas. Some colleges experienced much higher course withdrawals and course failures in spring 2020 compared with the previous spring. Some didn’t.

Instructors have had to change the way they teach in more ways than simply hosting a Zoom meeting. They’ve had to find ways to break out into small groups and ways to engage students and spark discussions as lively as what they may have had in a smaller lecture class.

They’ve realized not everyone had reliable internet at home, so some have had to make audio-only recordings or transcripts of their lectures for easier downloads.

Colleges have spent hundreds of thousands of dollars purchasing laptops and hot-spot capabilities for students who don’t have their own computers or an internet connection at home. They’ve spent money on training for faculty members to help them improve the online elements of their instruction.

In the spring, the faculty and administration did everything they could to help students who had roadblocks to continuing their education, said Jen Tablot, an associate professor of writing at the University of Central Arkansas. The university got laptops and hot spots for students and even some faculty members.

Students had to get creative at times just to be able to do their work. One of Talbot’s students stayed with relatives in Conway to continue to have access to the internet.

“I’ve heard secondhand about students who were using public Wi-Fi from their cars or doing things like emailing their professor when they were not able to participate in a Zoom meeting,” she said.

“I know a lot of faculty members were recording class meetings so that students who were not able to participate in real time would at least be able to view that recording later and get the content that way,” Talbot said.

At the University of Arkansas at Fort Smith and elsewhere, instructors who can’t evaluate a student’s in-person assignment, such as a welding task, can watch a recording of it.

Some technologies, like Blackboard Learn, monitor students who are taking tests. According to information provided to the Arkansas Democrat-Gazette, colleges have spent thousands of dollars on remote proctoring tools that detect unusual behavior during tests or that watch students, who turn on their web cameras, while they take a test. That ensures students aren’t cheating or aren’t having another person take the test for them.

Faculty members are using what they’ve learned in the past several months to improve the fall experience, and they are relying on one another for some assistance.

At the University of Arkansas at Little Rock, about two-thirds of the faculty had experience teaching online courses, said Ann Bain, executive vice chancellor and provost. In recent months, faculty members have been sharing their ideas for instruction with one another.

It’s called Teaching in the Time of Covid, said Amanda Nolen, faculty senate president and an education professor. Every week, faculty members tackle a different challenge. Last week it was making their courses as accessible as possible.

“How do we create a productive and constructive classroom environment under the constraints of not just a pandemic, but also the economics issues of our time?” she said.

Covid-19, the disease caused by the coronavirus, is worse in lower-income and minority communities, she said. At that same time, lower-income communities, which can include members of minority groups, are going to have a harder time accessing remote instruction, she said.

“If we don’t address the inequities in access to higher ed, then this covid, the constraints introduced by the pandemic, is only going to further create additional gaps,” Nolen said.

That’s challenging, even in the best of times, she said.

“So here we are. You couldn’t have written a more dark scenario than what we’re in right now,” Nolen said.

Faculty members whose contracts hadn’t started yet were planning for various modes of instruction, Nolen said, based on the uncertainty of what will happen this fall.

“That’s unsettling, obviously, but they are doing it,” she said.

Always thinking about access to education is the positive that Patricia Poulter, UCA provost and vice president, is taking away from the moment.

Faculty members have considered their students’ access to education before, but not like this, she said. Using different methods of teaching showed what students needed at home.

“Across the country, we learned that for many students being able to come to campus really puts them on a more level playing field with other students,” she said, noting that students have internet and support staff on campus and other things to help them make educational gains.

Poulter can use that awareness in the future, post-pandemic, when she thinks education will still look different from what it was before the pandemic.

“I think we will return to not having to have the same kind of health and safety protocols in place,” Poulter said, “but I think in many ways it will never go back to being the same, and that might be OK.” 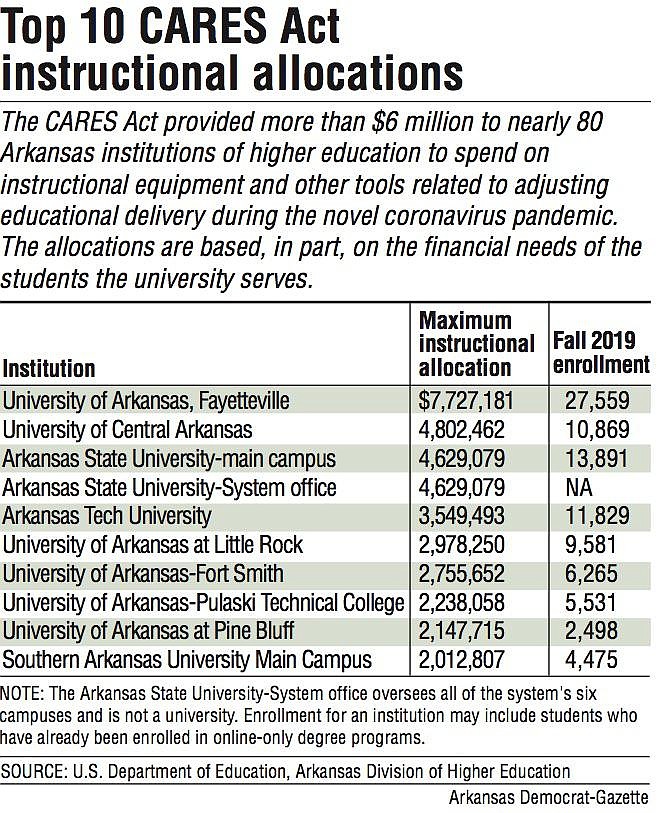 The best thrillers and crime novels to read