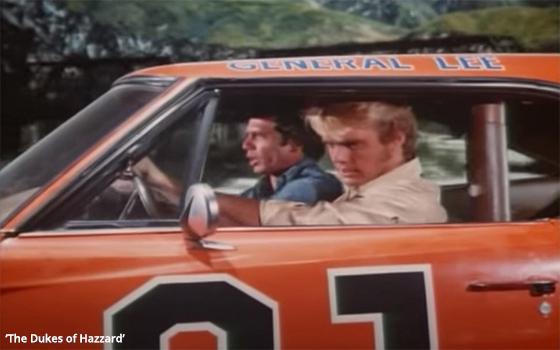 Stories found on the internet in recent days about a
supposed controversy concerning the famed car from “Dukes of Hazzard” are the journalistic equivalent of fishing expeditions.

In the context of today’s upheaval about symbols of
the Confederacy, some reporters have decided to throw the old “Dukes of Hazzard” car into the mix.

The issue with this car has to do with its decoration and name. This car was
named the General Lee, after Gen. Robert E. Lee. The name can be seen in the picture above emblazoned over the driver’s-side window.

The old Confederate battle flag — commonly known as the
Stars and Bars, and currently being banned all over the place — was painted on its roof.

The car was a 1969 Dodge Charger — actually a series of them that were used in the show, since the
car was routinely damaged in the high-speed chases and dramatic airborne jumps that were a trademark of many of the show’s episodes.

“The Dukes of Hazzard” aired on CBS from 1979
to 1985. The show was about two unlaw-abiding brothers named Luke Duke and Bo Duke (played by Tom Wopat and John Schneider, respectively).

The show celebrated redneck, “good ol’
boy,” southern culture in a light-hearted way. It was enormously popular. Like other hits of that era, audiences of 20 million people or more on any given night were not uncommon.

The
General Lee car became famous not only on the show but on myriad pieces of “Dukes” merchandise such as lunch boxes.

Here in the present day, symbols not unlike the ones painted on
the car are under fire with protesters vandalizing long-standing statues of Confederate generals and Confederate memorials in dozens of U.S. cities and towns.

But in the stories about the
“controversy” over the General Lee car, no actual complaint from any individual or organization can be found.

In other words, there may in fact be someone somewhere who feels
offended every time he or she encounters this car in a picture or video. But the writers of these stories apparently never found anyone.

For example, a story running to a reasonably long
length on the Hollywood Reporter website manages to quote a number of people associated with “The Dukes of Hazzard,” including the show’s two stars, who are all called upon to
defend the artwork on this TV car from 40 years ago.

But then you read the story and wonder: What controversy? And who is “renewing” it? “A cloud hangs over
‘Hazzard’,” the story insists. “What haunts the action comedy these days is the Confederate battle flag painted on the roof of the boys’ ride, the General Lee.”

But who or what is “haunting the show”? What exactly is this “cloud”? The practice of journalism would appear to require that an actual controversy be found, and its
existence backed up by evidence, before declaring that one exists.

At no point in this story is anyone cited or quoted as having a problem with the “Dukes of Hazzard” car.

One reason could be that the show is not exactly omnipresent today. In fact, it is hardly present at all since it is not currently airing anywhere in the TV universe.

Meanwhile, another General Lee story found on CNN.com, which picked it up from a
local Illinois newspaper, had the director of a car museum in Illinois defending the General Lee that it displays in its collection that is decorated with the flag.

“The 1969 Dodge
Charger known as ‘The General Lee’ sports the Confederate flag,” says this CNN rewrite. “All things connected to that legacy and period of history are being scrutinized as the
nation reckons with race relations.”

And yet, the museum’s director is quoted as saying his General Lee is not being “scrutinized” by anyone, and he has no plans to remove
the car or alter it in any way.

“We feel the car is part of history, and people love it,” he said. “We’ve got people of all races and nationalities that remember the TV show
and aren’t offended by it whatsoever. It’s a piece of history and it’s in a museum.”

The museum has had the car on display since 2005 and according to the man
in charge, has received no complaints.