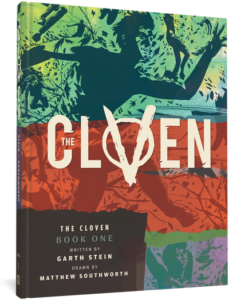 We are so happy to have you back in the store for in-person shopping and a bit of browsing.

Our most important priority is the health of our customers and staff, and consequently we ask that all customers wear face masks, that you sanitize your hands upon entry and that you keep 6 feet of space between yourself and other shoppers and staff. For now, we will permit only five shoppers in the store at a time, so we request that lollygagging and dillydallying is kept to a minimum… as much as possible!

While I read a pretty wide variety of books, the ones I am most drawn to tend to be dark or twisty or weird or have supernatural elements … all of the above? Even better! I realize that books like these are not everyone’s cup of tea even in the best of times, but well-written stories that take me to a completely different time or place or even a whole new world I find completely enthralling. A few that I have very much enjoyed lately are below.

The Book Club is back! 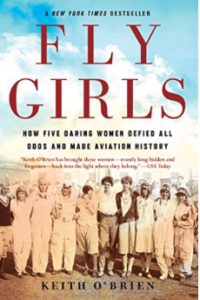 For the foreseeable future we are going virtual with Edmonds Bookshop Book Club via Zoom.

By all accounts, the Zoom book clubs are going quite well, join us this month!

In August we will be discussing “Fly Girls: How Five Daring Women Defied All Odds and Made Aviation History” by Keith O’Brien.

“Fly Girls” weaves together the stories of five remarkable women: Florence Klingensmith, a high school dropout from Fargo, North Dakota; Ruth Elder, an Alabama divorcée; Amelia Earhart, the most famous, but not necessarily the most skilled; Ruth Nichols, who chafed at her blue blood family’s expectations; and Louise Thaden, the young mother of two who got her start selling coal in Wichita. Together, they fought for the chance to fly and race airplanes–and in 1936, one of them would triumph, beating the men in the toughest air race of them all…

Send us an email here to register your email for Book Club and we will send you an invitation with a Zoom Meeting link as each book club meeting is scheduled. [More specific, expansive information on our website.]

Recent book releases of note:
“The Ballad of Songbirds and Snakes” by Suzanne Collins.  Staff recommended.
“A Burning” by Megha Majumdar.
“Friends & Strangers” by J. Courtney Sullivan.
“The Vanishing Half” by Brit Bennett.
“The Secrets We Kept” by Lara Prescott. In paperback.
“Fast Girls: A Novel of the 1936 Women’s Olympic Team” by Elise Hooper. Staff recommended. In paperback.
“The Golden Cage” by Camilla Läckberg.
“Survivor Song” by Paul Tremblay. Staff recommended.
“A Beautifully Foolish Endeavor: The Carls #2” by Hank Green.
“The Lost and Found Bookshop” by Susan Wiggs. Chosen for July IndieNext.
“Chances Are . . .” by Richard Russo. In paperback.
“Utopia Avenue” by David Mitchell.
“The Order” by Daniel Silva. Staff recommended series!
“The Pull of the Stars” by Emma Donoghue.
“The Answer is…Reflections on My Life” by Alex Trebek.
“Malorie: A Bird Box Novel” by Josh Malerman. “Bird Box” is staff recommended,
“The Geometry of Holding Hands: An Isabel Dalhousie Novel #13” by Alexander McCall Smith.
“Mexican Gothic: A Novel” by Silvia Moreno-Garcia.

Some books of note being released in August:

“The Death of Vivek Oji” by Akwaeke Emezi. Their sophomore novel for adults follows the mysterious demise of a young, queer Nigerian boy. Publisher’s Weekly spoke to the author recently about the parallels between their hero and themselves, and noted that the book offers “sharp observations about the cost of transphobia and homophobia” and is a “worthy effort.”  The review here. August 4, 2020.

“The Fixed Stars: A Memoir” by Molly Wizenberg. Her latest follows her coming out as an adult. At 36, the author was married with a young toddler. Her life, and marriage, were upended, though, after falling for a female attorney she met while serving jury duty. August 4, 2020.

“The Silent Wife: Will Trent #10” by Karin Slaughter. Investigating the killing of a prisoner during a riot inside a state penitentiary, GBI investigator Will Trent is confronted with disturbing information.

When the past and present begin to collide, Will realizes that everything he values is at stake . . . August 4, 2020. 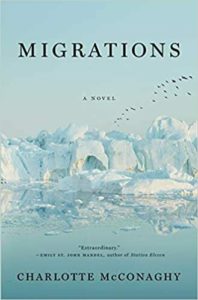 “Migrations” by Charlotte McConaghy: Chosen for August IndieBound: “Migrations is a book so beautiful it will leave you breathless. Breathless with cold despair, and breathless with pulsating life and hope. This is a truly stunning debut.” Staff recommended. August 4, 2020

“The Midnight Sun” by Stephanie Meyer. The tale, as told through Edward’s eyes, takes on a new and decidedly dark twist. Meeting Bella is both the most unnerving and intriguing event he has experienced in all his years as a vampire. August 4, 2020.

“True Crimes and Misdemeanors: The Investigation of Donald Trump” by Jeffrey Toobin. From CNN chief legal analyst, a real-life legal thriller about the prosecutors and congressional investigators pursuing the truth about Donald Trump’s complicity in several crimes–and why they failed. August 4, 2020.

“It Was All a Lie: How the Republican Party Became Donald Trump” by Stuart Stevens. From the most successful Republican political operative of his generation, a searing, unflinching, and deeply personal exposé of how his party became what it is today. August 4, 2020.

“Owls of the Eastern Ice: A Quest to Find and Save the World’s Largest Owl” by Jonathan C. Slaght. For five years, the author seeks to save the world’s largest owl (he thought it was a bear with feathers when he first encountered it), a bird native only to a remote region of Russia. He tells the story using a blend of reportage, narrative nonfiction, memoir, science journalism, and travel writing.  August 4, 2020. 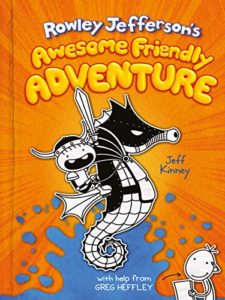 You’ve never seen the Wimpy Kid World like this before–an entirely new, awesome, friendly, truly fantastic fantasy quest! From the imagination of Rowley Jefferson comes an adventure of epic proportions. Join Roland and his best friend, Garg the Barbarian, as they leave the safety of their village and embark on a quest to save Roland’s mom from the White Warlock. August 4, 2020.

“Tough Love: My Story of the Things Worth Fighting For” by Susan Rice. With a new afterward for the paperback edition. August 4, 2020.

“Luster” by Raven Leilani. Irresistibly unruly and strikingly beautiful, razor-sharp and slyly comic, sexually charged and utterly absorbing, this is a portrait of a young woman trying to make sense of her life–her hunger, her anger–in a tumultuous era. It is also a haunting, aching description of how hard it is to believe in your own talent, and the unexpected influences that bring us into ourselves along the way. August 4, 2020.

“Caste: The Origins of Our Discontents” by Isabel Wilkerson. The Pulitzer Prize-winning author of “The Warmth of Other Suns” examines the unspoken caste system that has shaped America and shows how our lives today are still defined by a hierarchy of human divisions. August 4, 2020.

“A Private Cathedral: A Dave Robicheaux Novel” by James Lee Burke. After finding himself caught up in one of Louisiana’s oldest and bloodiest family rivalries, Detective Dave Robicheaux must battle the most terrifying adversary he has ever encountered. In his most powerful book yet, he mixes crime, romance, mythology, horror, and science fiction to produce a thrilling story about the all-consuming, all-conquering power of love. August 11, 2020.

“Vesper Flights” by Helen Macdonald. The author of the phenomenal “H Is for Hawk” takes flight again in this collection, a profound meditation on life and freedom as told in stories of swifts, vespers, and more. August 25, 2020.

“Sisters” by Daisy Johnson.  From the Booker Prize finalist, a dark, atmospheric novel that explores the tension of familial closeness, both physical and emotional, and unfolds in a house in near-isolation… and somehow she wrote it before the pandemic. August 25, 2020.

“2030: How Today’s Biggest Trends Will Collide and Reshape the Future of Everything” by Mauro F. Guillen. The world is changing drastically before our eyes–will you be prepared for what comes next? A groundbreaking analysis from one of the world’s foremost experts on global trends, including analysis on how COVID-19 will amplify and accelerate each of these changes. August 25, 2020.

“Summer:  Seasonal Quartet” by Ali Smith.  “A deeply resonant finale to a work that should come to be recognized as a classic. . . . A novel that is wonderfully entertaining–for its humor, allusions, deft use of time and memory, sharply realized characters, and delightfully relevant digressions–and a reminder, brought home by the pandemic, that everything and everyone truly is connected and the sufferance of suffering hurts us all.”–Kirkus Reviews (starred review). August 25, 2020.

“Squeeze Me” by Carl Hiaasen. A hilarious new novel of social and political intrigue, set against the glittering backdrop of Florida’s gold coast. Irreverent, ingenious, and highly entertaining, this new novel perfectly captures the absurdity of our times. August 25, 2020.

You may pre-order any forthcoming title by visiting our website.

Stay safe. Do your best to stay sane. And as always: Happy reading!

Edmonds native Elaine Mattson has worked at The Edmonds Bookshop off and on since she was 12 years old, and has also worked at a book wholesaler, a book publisher, and for the book publishing division of a large local software company (yes, that one). “I was raised a book lover [thanks, Mom!],” Mattson says. “We got book lights by our beds as soon as we were old enough to read. And then I probably got in trouble for reading too late the very next night. And I still read too late!

Fury Road Was A Hit

Sci-fi Saturday: When “The Workplace” Is Anything But