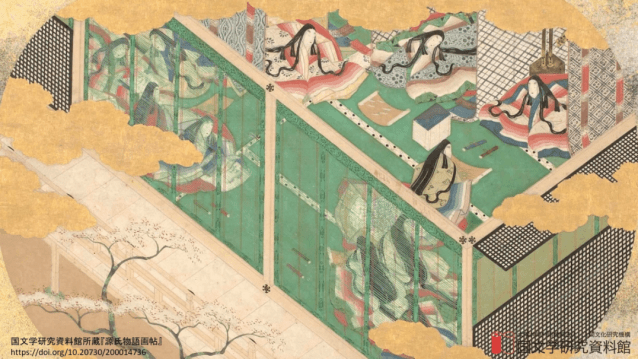 Gorgeous visuals from some of Japan’s most revered art pieces now available for download.

The National Institute of Japanese Literature is Japan’s premier archive of historical documents and strives for their preservation as well as their analysis. These historical documents include a wide gamut of items, from scrolls embroidered in golden decal to 600-year-old bound compilations of delicately curated drawings. And now thanks to the generosity of this museum, folks can download and use beautiful traditional artwork as digital backgrounds for their video calls.

Ten pieces total will be provided by the National Institute of Japanese Literature, whether you need something to cover up your messy room or if you desire a more elegant look in a virtual conference setting. Spanning from the Heian Period (794 ~ 1185) to the advent of the Meiji Period (1868), the collection sources artwork spotlighting a variety of themes.

Some chosen scenes are infused with a supernatural spirit, such as this snapshot from a scroll titled Night Parade of One Hundred Demons, which features a motley troupe of yokai, or supernatural beings, on a romp to scare the local citizenry.

Other scenes captured cultural practices particular to the transitional time period between the Edo Period and the Meiji Period. The background below is a lavish account of an ee ja nai ka, or a dancing festivity where local citizens aired grievances towards the government.

▼ The phrase “Ee ja nai ka” itself, translated loosely to “Who cares?” in English, reflects the ribald and volatile nature of these gatherings where many participants are recorded to have been cavorting in the nude or even engaging in mob violence.

A few of the included art pieces are also visual homages to the vibrant landscapes of Japanese literature, focusing on  famous works written during the Heian Period such as The Tale of Genji and The Tale of Ise.

▼ This particular painting highlights the dreamy, atmospheric tone of The Tale of Genji, which is often considered the world’s oldest novel.

▼ Though The Tale of Ise is an anthology of poetry and short prose, its verse stunningly describes the daily coming and goings of the medieval Japanese gentry, allowing readers a glimpse into Japanese medieval history.

And lastly, a few of the wallpapers provided by The National Institute of Japanese Literature are illustrations of Tokyo’s bustling streets at the start of the Meiji Period. Regardless of if your knowledge of Japanese history runs shallow or deep, anyone can enjoy and appreciate the past architectural wonders of Japan’s capital.

All ten digital backgrounds are primarily for personal use. A closer look at these pieces is available here. And if you’re really looking to make a statement with your Zoom background, sometimes all you need is an intimate snapshot of a subterranean bathroom to drive your point home.

A romantic thriller on a historical background

A romantic thriller on a historical background

Carlo Gébler: ‘Why would you damage a  book? I just don’t get it’

Accelerated Resolution Therapy can help anxiety, depression and any trauma that still haunts you