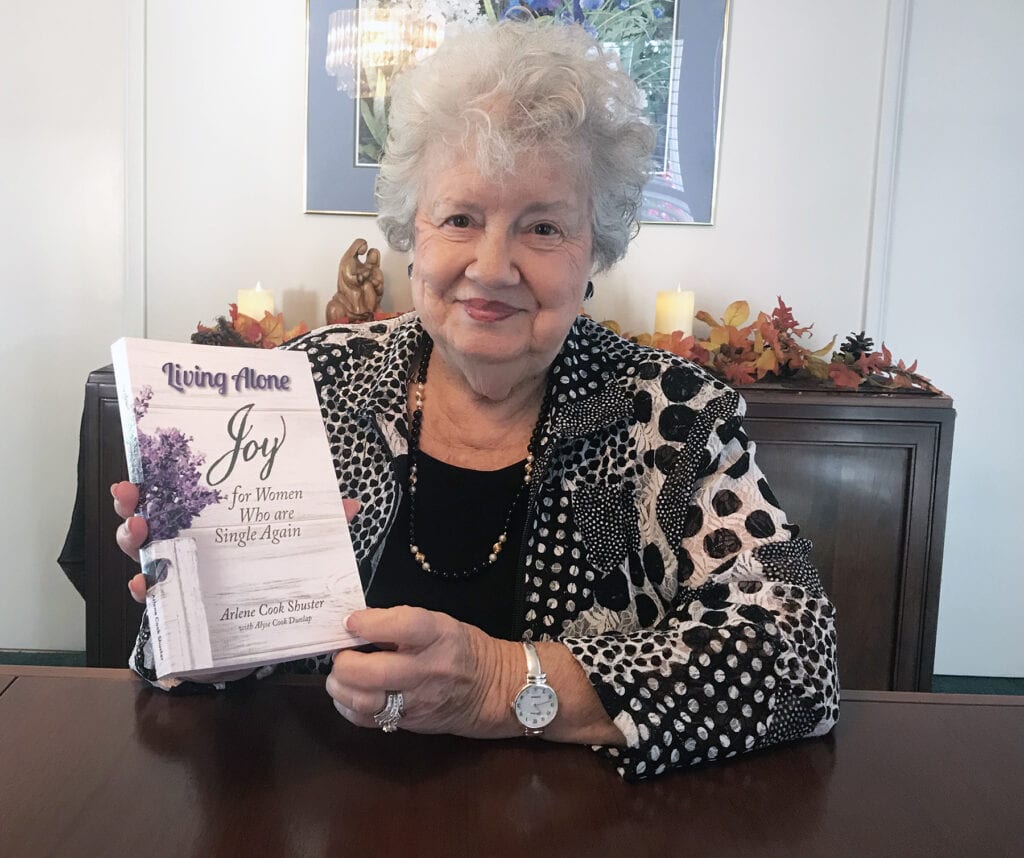 Arlene Cook Shuster may be the Grandma Moses of Christian self-improvement writing, with perhaps her best work ahead, even though she is in her 80s.

Mrs. Shuster recently published “Living Alone: Joy for Women Who are Single Again.” She says of it: “This is my eighth book and the most important one.  It is, without a doubt, my best effort.”

Mrs. Shuster won the 1982 Writer’s Digest National Grand Prize and San Diego County Christian Writers Guild 1994 Grand Prize for “Living Alone—Devotions for Women Who are Single Again.”  She has also written several novels, include “From the Ashes of Hell,” “Forever Yours,” “One True Love,” and “Love’s Destiny.” She is also the author of hundreds of magazine articles.

Mrs. Shuster was born and raised in Escondido. Her maiden name was Knappe. Her grandparents came here in 1911 and had a tailor shop on Grand Avenue where Grand & Ivy meet. She has been at the same house, which she and her first husband built, for 53 years. She graduated from Escondido High School. In 1953 when it was still up on the hill.

She and her husband, Bob, are very active in Escondido organizations and local politics. They are members of the Escondido Rotary Club and Grace Lutheran Church, which her grandparents helped found 101 years ago.

She was a middle school teacher for several years before deciding that a career in writing was what she wanted. It came about this way. Teachers have asked their students to write book reports since time immemorable. She devised 35 different ways to do it and wrote a magazine article about it and was thrilled when she got a check for $35. This was in the 1960s, so that was real money. There were other considerations: “My kids were little so it was a good time.”

The book is not autobiographical, although it obviously includes wisdom obtained from personal experience. Most of the chapters take the form of close trusted women friends having conversations about issues that concern them. And often arriving at conclusions.

“Every chapter is an anecdote,” she says. “There’s no lecturing but it offers a solution. It will help someone who is living alone.”

Besides being helpful for those who are alone after losing or divorcing a spouse, it also has something for someone who is lonely due to an unhappy marriage or whose husband is in a care facility.

She wrote  “Living Alone” based on her personal experience of recovering from the death of her first husband. She was single again for 20 years. This is a common problem. As she writes: “Numbers don’t lie. The world’s women outlive their husbands by five to fifteen years. America’s divorce rate is at 50% including Christian couples who are not active participants in church life. If not already, we women are almost certain to be single again sometime in our lives. Really, the book is for all women, because we are all going to be living alone eventually,” she says.

It’s also a book for husbands to read to help prepare their wives for that eventuality. She tells the story of a man who read the book and then decided to take steps to help his wife learn to live alone. By helping her learn how to take care of the home finances or to take her to buy a new car, but staying in the background.

“Many women our age never have had to deal with such issues,” she said.

It is also not a recycled version of an earlier book that covers similar material, but does include materials that would perhaps have raised eyebrows at an earlier time, such as Chapter 22, “Singleness and Sex.”

Chapter 20, “Pray for the Preyed Upon” covers another modern topic, that of the vulnerability of single widows to scamming, especially internet scamming. Like the story of an online pen pal that a woman made, who then tried to scam her out of $1,200: “Claudine had been reeled in slowly and hooked hard. She could not see the scam for what it was. It took a couple of weeks for her sister and health center staff to convince Claudine that there never was a Christian confidant named Frank.” He was a criminal, sitting at his computer, “bilking enough money out of trusting souls to make a fine living.”

You don’t have to be religious to get something useful from Mrs. Shuster’s book. Another chapter, 34, “Good Without God” discusses this subject.  “Lots of people prosper, do well and have exciting lives without believing in God,” she concedes. “God blesses everyone, whether they are Christian or not.” Yet one of the book’s characters concludes, “There are deniers who live sober and disciplined lives. Yet, deep within, none are truly content because they are not at peace with God.”

“The herd in the room” right now, of course, is COVID. “Right now, that’s what we are experiencing: COVID, the election, we all have our private herds,” she says. “Most of the world is not Christian, and most people believe they are in control of their own lives and along comes COVID.”  She adds, “We have hope. We know when the end comes we have eternal life.”

Although she is critical of many things the government does to fight COVID she obeys the rules because that is what Jesus taught, “to render unto Caesar.”

Another interesting thing the book covers is what the author calls “broken heart syndrome” a phenomenon that can fool physicians into thinking it’s heart trouble because it actually causes the heart increase in size. It is brought about by grief, such as the grief of losing a spouse. “It can present itself like a heart attack,” she says.

If you think you might like Mrs. Shuster’s book but are not convinced yet to spend the money, you can go onto Amazon and read the first three chapters for free.

“Living Alone: Joy for Women Who are Single Again,” is published by Cook Enterprises, P.O. Box 458, Escondido, CA 92033. For more information email the author at arleneshuster@cox.net.

On the Passing of Literary Men and the Making of Biographies