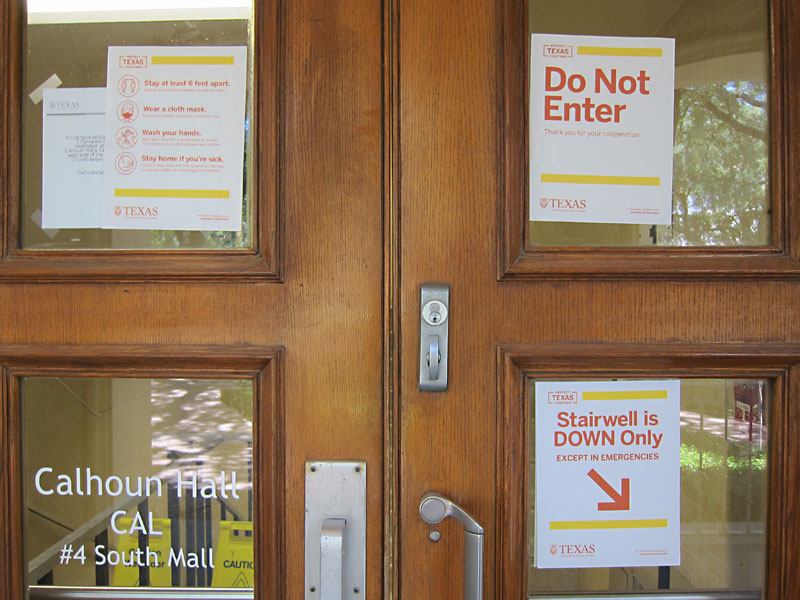 Go this way and that way: signage to control traffic flow on campus (Photo by Beth Sullivan)

UT students Sarai Velasquez and Maria Henriquez are taking COVID-19 seriously. The two friends, both wearing masks, are sitting six feet apart when I come across them hanging out on the South Mall’s lawn.

With the fall semester less than two weeks away, I thought it was time to get a finger on the Forty Acres’ pulse: How are UT students feeling about coming back to campus?

“To be honest, I’m pretty scared about coming back to campus,” Maria tells me. A double major in mathematics and chemistry, Maria has one in-person class this fall, an organic chemistry lab, plus TA’ing a virtual chemistry class. When coupled with the commute from her Riverside apartment, it’s a tight schedule that means longer hours on campus, and potentially more chances for exposure.

Sarai shares her friend’s worry. A third-year kinesiology major, Sarai’s taking a weight-lifting course in person, but because of her schedule – with online lectures right before and immediately following the weight-lifting class – she doesn’t have a choice but to spend more time on campus than she’s comfortable with. “Instead of being on campus, which is one hour or two hours twice a week, I have to be on campus for four hours twice a week now,” she explains. For now, Sarai’s plan is to find somewhere outdoors to work on her virtual coursework “because I don’t trust going into the buildings.”

According to UT, about 50% of students have opted for a fully virtual semester. Still, the overwhelming majority of students live off campus, which for some students raises concerns about the spread of COVID-19. University officials have said both on and off campus parties will be banned. However, Sarai’s skeptical of just how feasible enforcing that will be. “I just feel like the temptation is always gonna be there to have parties especially in West Campus,” says Sharai, pointing to a Fourth of July pool party she says went viral on UT Twitter. “A lot of people weren’t wearing masks, obviously they weren’t social distancing, and it didn’t get shut down.” She says of the bad behavior, “How are you not taking other people’s lives into consideration? Because it’s killed people.”

Sarai and Maria, of course, are but two of the tens of thousands of Longhorns who’ll be navigating a college experience unlike any before – none two that will be the same. Risks will be weighed, and the costs of which won’t be borne equally. “The people coming back to Austin for school, they’re wanting to live out their whole college experience,” says Sarai. “I feel like that’s really gonna come into play, like who takes [COVID-19] seriously and who doesn’t? Yeah, your friends are gonna be in town, but how badly do you want to risk seeing them? Because you never know if you’re asymptomatic or not.”

Words on Bathroom Walls Film Review: Teen Movie With Much on Its Mind

Words on Bathroom Walls Film Review: Teen Movie With Much on Its Mind

A hunt for Saddam’s gold in Chicoan’s new novel