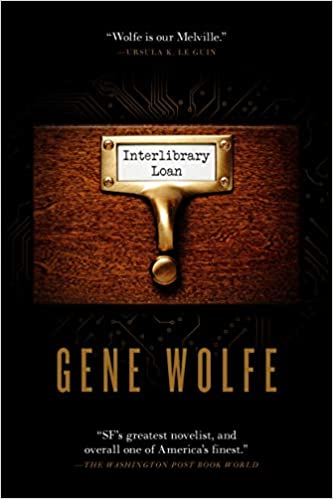 There was already something of a valedictory tone about Gene Wolfe’s 2015 novel A Borrowed Man, which portrayed a glum, diminished future in which authors survive as helpless ”reclones” who could be checked out of libraries like books (or cubes or disks) – but who could casually be incinerated if they aren’t checked out frequently enough. In that novel, Ern A. Smithe, the ”reclone” of a long-dead mystery writer in the Spice Grove public library, was checked out by a wealthy heiress who believed one of his books contained clues to a family mystery. In the sequel, Interlibrary Loan, Smithe finds himself, along with a cookbook author and romance writer, trucked to another small-town library in Polly’s Cove, where he is checked out by Chandra, the teenage daughter of a woman named Adah Fevre, whose anatomy professor husband has been missing for years. With no private detectives around, Adah hopes that Ern – an earlier ”edition” of whom she had consulted before (which becomes a plot point) – might be able to help, even though (as in A Borrowed Man) he points out that a writer of mysteries doesn’t really have the skills of a detective – though he does, suggestively, mention Treasure Island. This turns out to be prescient, since a mysterious hand-drawn map (whose ink seems to have magical properties when touched) is the main clue to finding a remote ”isle of corpses” that, according to his research associate, the husband had visited to find cadavers for his anatomy classes.

This being a Gene Wolfe novel, of course, what initially seems a straightforward mystery quickly soars off in unexpected directions, both in terms of plot and of narrative trickery. Smithe discovers that an earlier version of himself has been murdered in the library, adding to the mystery. Together with Adah, Chandra, and the reclone of a long-dead author of sailing books named Audrey Hopkins (with whom he develops a relationship), he sets out to find the island – but even before they get there, part of the mystery is resolved, only to open up new mysteries. On the island itself, where the locals have preserved their dead in ice caves for centuries, a stranger hands Smithe a flat box with weirdly magical properties. Yet another murder follows. By the time we’re done, the cast of characters has expanded to include the professor’s glamorous assistant and a western-writer reclone, and the puzzles expanded to include a hidden treasure and a secret doorway that may be a portal to another planet – possibly the same planet that Smithe had visited through a different portal in A Borrowed Man.

While, as is often the case with Wolfe, parts of the story are recounted by characters whose veracity we have plenty of reason to question, Smithe’s own voice is almost pointedly flat and restricted; as he reminds us, ”I have to talk the way the first Ern A. Smith wrote exposition.” Not only are the reclones prohibited from writing new books, as they were in the earlier novel; they’re even prohibited from developing their own voices (hence the Western author speaks only in the B-movie Western slang), even though in every other way they’re fully human. While there is much familiar Wolfe imagery throughout the novel – doorways, journeys, magical objects, doubles, enigmatic figures – there is also an almost overwhelming sense of compromise with mortality: authors surviving only on the shelves of libraries, villagers preserved for centuries in ice caves (some, it is suggested, still partially alive), clones coming to terms with earlier versions of themselves. Those are the sorts of nightmares you’d expect to have occurred to a great many writers – but there is also the hint of treasures brought from distant worlds, which is something else Wolfe was pretty good at. Interlibrary Loan is, like most of Wolfe’s final novels, more intimate in scope and restrained in style than his celebrated masterpieces, but it’s a fitting and suitably twisty rumination on which to end an astonishing career.

Gary K. Wolfe is Emeritus Professor of Humanities at Roosevelt University and a reviewer for Locus magazine since 1991. His reviews have been collected in Soundings (BSFA Award 2006; Hugo nominee), Bearings (Hugo nominee 2011), and Sightings (2011), and his Evaporating Genres: Essays on Fantastic Literature (Wesleyan) received the Locus Award in 2012. Earlier books include The Known and the Unknown: The Iconography of Science Fiction (Eaton Award, 1981), Harlan Ellison: The Edge of Forever (with Ellen Weil, 2002), and David Lindsay (1982). For the Library of America, he edited American Science Fiction: Nine Classic Novels of the 1950s in 2012, with a similar set for the 1960s forthcoming. He has received the Pilgrim Award from the Science Fiction Research Association, the Distinguished Scholarship Award from the International Association for the Fantastic in the Arts, and a Special World Fantasy Award for criticism. His 24-lecture series How Great Science Fiction Works appeared from The Great Courses in 2016. He has received six Hugo nominations, two for his reviews collections and four for The Coode Street Podcast, which he has co-hosted with Jonathan Strahan for more than 300 episodes. He lives in Chicago.

This review and more like it in the June 2020 issue of Locus.

While you are here, please take a moment to support Locus with a one-time or recurring donation. We rely on reader donations to keep the magazine and site going, and would like to keep the site paywall free, but WE NEED YOUR FINANCIAL SUPPORT to continue quality coverage of the science fiction and fantasy field.

A Choo is a romantic twist to superhero movies

Never Let Me Go Is the Sad, Literary Version of The Promised Neverland