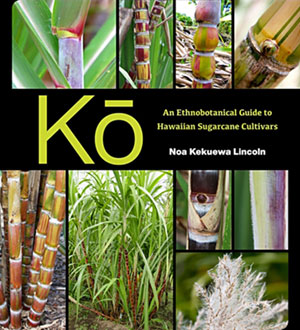 Nearly a millennium before Europeans explored the Pacific, Native Hawaiians had already introduced sugarcane, known as kō, to the islands. In fact, they cultivated kō extensively in many ecosystems, using diverse agricultural systems and developing dozens of native varieties.

A new book, Kō: An Ethnobotanical Guide to Hawaiian Sugarcane Cultivars, written by University of Hawaiʻi at Mānoa’s College of Tropical Agriculture and Human Resources Department of Tropical Plant and Soil Sciences Professor Noa Lincoln examines these native and heirloom kō, along with detailed varietal descriptions of cultivars held in collections today.

The book represents a decade of fieldwork and historical research by Lincoln. With more than 370 color photos, Kō includes the ethnobotany in Hawaiian culture, outlining its uses for food, medicine, cultural practices and ways of knowing.

“They look like giant candy canes; they really grabbed my attention!” said Lincoln. “You can see why early explorers called them the ‘Noble Canes.’”

Lincoln added, “Heirloom crops are often heralded as being tastier and more nutritious than our modern varieties. This is because breeding often focuses on uniformity, disease resistance, packability and other traits. But as we breed for specific traits, we often lose others. Sugarcanes are no different, with the soft flesh of our heirloom Hawaiian canes being sweeter and juicier than modern hybrids.”