Unreliable narrators rarely announce themselves as quickly as does the protagonist of Jeff VanderMeer’s new climate noir novel, Hummingbird Salamander, out today from MCD. 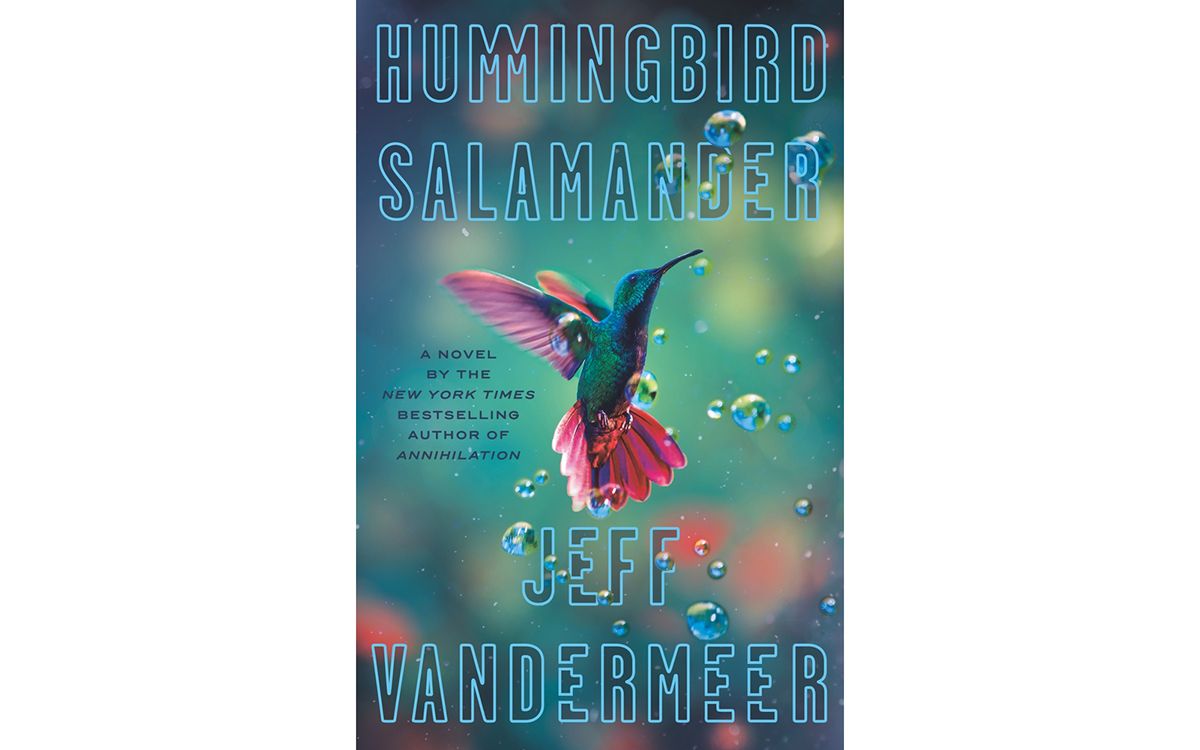 By the second page, the reader is invited to call the main character “Jane Smith,” and learns that she is currently somewhere in the Pacific Northwest. Jane won’t say where, exactly, but announces, “I’m here to show you the end of the world.”

It’s a grab-you-by-the-collar opening, and VanderMeer delights in propelling the narrative forward while leaving the characters and the reader off-balance. Relentlessly versatile but best known as an author of trippy science fiction and fantasy with an ecological bent, VanderMeer in Hummingbird Salamander adopts the attitude and accoutrements of the hard-boiled detective novel, set in a very near future of climate collapse.

What may separate the novel’s reality from our own is the intensity and ubiquity of ecological damage. Or, maybe not. The characters meet the many micro-catastrophes with a kind of resigned acceptance. VanderMeer writes, “Wildfires had consumed another state in the heartland. Cyclones another. Earthquakes from fracking were omnipresent. Oil spills from pipelines that didn’t bear thinking about. Pandemic, a rumor gathering strength.”

“Wildfires had consumed another state in the heartland. Cyclones another. Earthquakes from fracking were omnipresent. Oil spills from pipelines that didn’t bear thinking about. Pandemic, a rumor gathering strength.”

VanderMeer is best known for the Southern Reach Trilogy, the first installment of which filmmaker Alex Garland turned into the hit movie Annihilation, starring Natalie Portman. VanderMeer is also the author of Borne, Dead Astronauts, and many other titles, several of which confront the mystery of the natural world, especially after it has been altered (usually hideously mutated by nefarious corporate entities).

Reached at his home in Tallahassee, Florida, VanderMeer claimed not to remember much of his initial inspiration for Hummingbird Salamander beyond the first line: “Assume I’m dead by the time you read this.” He told Sierra, “I wrote that line down and slept on it. The next morning, as usually happens, there was a whole novel in my head.”

“Jane Smith” works as a security analyst for an unnamed tech company. One morning, a barista hands her an envelope along with her beverage. Inside is a key to a storage unit containing a tiny taxidermied hummingbird, long thought to be extinct. A single sheet of paper references a salamander not in evidence, and the note is signed “Silvina.”

By accepting the hummingbird, Jane sets in motion events beyond her control, an investigation that threatens to strip her of her job, her family, the rest of her identity, and much of her sanity. She follows a trail of crumbs left by reputed ecoterrorist Silvina Vilcapampa, daughter of an Argentinian industrialist who may be trafficking in endangered species. Most people think Silvina is already dead, but Jane finds evidence to the contrary.

Jane is not a blend-into-the-background kind of private investigator. She’s a big woman, a former wrestler and bodybuilder,and she uses her size as a weapon and as armor, pushing forward when other, slighter investigators would retreat.

When followed by a threatening potential stalker, Jane makes an unexpected maneuver. VanderMeer explain, “I thought, maybe she would just turn, haul off and hit him! Once I had that scene, then I kind of had a clue to her character.”

Jane also cheats on her husband, neglects her daughter, lies to her boss, compromises a colleague, and obsesses about the deaths of her older brother and their grandfather. It can take an effort to like her. As so often happens in crime fiction, the main character’s path leads back home, where family has to be re-assessed. Jane has long believed her salamander-loving brother was drowned by their abusive grandfather. VanderMeer scatters clues throughout the tale to suggest there is much more to the story.

In her personal and professional lives, Jane is far from infallible. Again and again, she seems to make the wrong choices, putting herself and others in unnecessary danger.

“The unreliability occurs in how she’s trying to reconstruct how she got in so deep,” VanderMeer says. “It’s not the typical unreliable narrator. There are certainly things that she withholds, but she’s also telling the story for a particular audience.”

A former mystery reviewer for Kirkus, VanderMeer points to Per Wahloo and Maj Sjowoll’s Martin Beck novels, as well as the novels of Ross Macdonald and Meg Gardiner, as sources of inspiration. Here in the post-Trump Era, we might be ready for another Golden Age of conspiracy fiction, similar to the mid-seventies, when post-Watergate paranoia fueled thrillers such as James Grady’s Six Days of the Condor, Richard Condon’s Winter Kills, or Alan Pakula’s The Parallax View, and drew audiences to movie theaters and bookstores.

Without naming names, the novel recognizes the destruction inflicted by the Trump administration’s policies. “One thing I did know is I wasn’t going to mention Trump’s name,” VanderMeer says. “Once you do that, you bring in all these other associations, and it destabilizes your novel.”

Jane’s journey in Hummingbird Salamander eventually takes her into the worlds of animal trafficking and eco-terrorism. What she finds hits her hard, as it will the reader, but there are lessons that need to be learned. VanderMeer writes, “We must love what has been damaged, because everything has been damaged. And to love the damage is to know you care about that world. That you’re still in the fight.”

Cryptic, visionary and suspenseful, Hummingbird Salamander leaves many questions open at its end. VanderMeer’s intentions are clear in at least one regard. “I want the connection between our survival and the environment’s survival to  be something that sticks in  the reader’s mind.”

Whatever her name might be, “Jane Smith” leaves an indelible impression.

Author Joab Stieglitz to host a book-signing for his thrilling novel The Old Mans Request: Book One of the Utgarda Trilogy

Lionel Shriver Warns Readers Not to Meet Their Favorite Authors