Two of the Big Ten’s blue bloods are led by lifetime appointments.

A career of an eccentric master of surrealism

Former star quarterbacks with Stanford ties and NFL pensions whose youthful versions guided both schools to their respective mountaintops. Favorite parishioners of the churches they were tapped to lead.

Jim Harbaugh and Scott Frost explored the wilderness, put additional polish on their resumés and positioned themselves for glorious homecomings to campus. Both are equipped with diverse knowledge and experiences they could apply to upgrading their programs while preserving the delicate cultures they serve and revere.

Yeah, it hasn’t gone according script in Lincoln or Ann Arbor – but that’s the script’s fault. Look at the cast of Stars and Bars, a movie you’ve never heard of or seen. No A-lister could save it, and it was destined to be exactly what it ended up becoming. It was just a little more expensive and embarrassing. Michigan and Nebraska, this is your script.

First, the Huskers – completing their first decade masquerading as a B1G football program:

The Huskers entered the decade having escaped a Series of Unfortunate Decisions, from firing Frank Solich to hiring Bill Callahan. They turned the corner and were winning nine or 10 games every year when they terminated Pelini and dipped back into the Unfortunate Decision well by hiring the comprehensively mediocre Mike Riley, who – bonus – was already older than Solich was when they sent him packing.

Nebraska is now trying to just get back to where Bo had them. The world has changed a bit.

Frost notched a Pelini (nine wins!) over his first two seasons, the kind of thing Bo used to regularly achieve in a single frame amid consternation and disapproval. When Nebraska’s favorite son came home with all of his worldly education and bi-coastal success, Nebraska AD Bill Moos said Urban Meyer and Jim Harbaugh were ‘running a little bit scared, but won’t admit it’.

Hey, speaking of getting back to where Bo had them:

Imagine Bo with a Tennessee accent and a lucky wooden pig in his pocket. Michigan’s dream hire is turning out to be Ohio State erotica.

From winning the winnable games and weaponizing M i c h i g a n  t r a d i t i o n to losing in the postseason, Ann Arbor got itself the Bo sequel it never wanted. The missing pieces have been conference titles and a rivalry split with the Buckeyes, who are operating at their historic peak and uninterested in merely holding serve with anyone other than Clemson.

This was the script. Michigan is otherwise back to Bo stasis. The world changed a bit.

I cannot recall a coaching hire of the past quarter-century – including Nick Saban’s return to the SEC West – that exceeded the unbridled optimism felt in Ann Arbor or Lincoln when Harbaugh and Frost returned home. When Jim Tressel – who had won four national titles in a single decade – returned to Columbus in 2001, Buckeye fans outside of Mahoning County were like okay, sure.

HARBAUGH USED TO BE WEEKLY TABLOID FODDER, CREATING CONSTANT STORIES AND BUZZ. HE HAS TWEETED ONCE IN 2020.

When Urban Meyer returned to Columbus in 2011, that fantasy barely had months to marinate before materializing. Frost-to-Nebraska and Harbaugh-to-Michigan had years. Tressel owned the conference for a decade and it took him one season to assert control. Meyer won his first 24 games.

Neither was a return to the Woody Hayes days. Clutch your pearls: You would not want that.

Woody lost at least three games nearly half the time he coached the Buckeyes. Ohio State hasn’t lost three games in a non-Tatgate self-nuke season since Zach Harrison was seven years old. They were Big Ten co-champs in 2008, annihilated Michigan and well, it was just okay. That would feel like a crisis these days.

Yeah, Woody also won national titles. Everyone, all together: The world changed a bit. 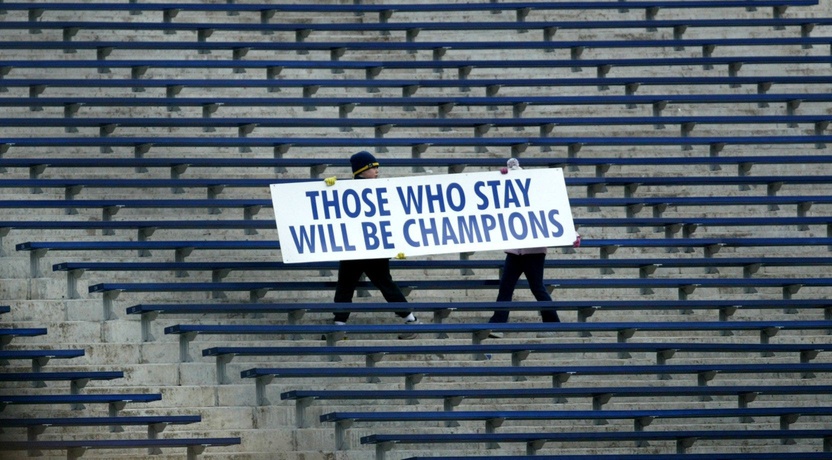 Buckeye fans admittedly have a warped view of coaching hires. The most recent non-interim Ohio State head coach not in or destined for the CFB Hall of Fame is Paul Bixler, who skipped town for Colgate after one season.

When Ryan Day was retained in 2018, the rest of the country relished an inevitable decline only to discover Day was a schematic upgrade and a recruiting dynamo without any discernible baggage or problematic friends-and-family hiring tendencies.

Imagine if Urban had gone 8-4 in 2012 instead of 12-0, or if Tressel had sprinkled in a few more 2004 reset seasons over his run. Day has been Ohio State’s Hollywood ending we didn’t see coming. We didn’t even have a script prepared to leave us disappointed, and that’s the central point here: There shouldn’t be a script. The story should write itself.

Harbaugh, who returned to Michigan with huge fanfare and bluster – and immediately made noise with creative hiring and recruiting tactics to meet the towering expectations for a return to something that never really existed – has gone from a weekly tabloid to a recluse who has tweeted exactly once in 2020. His presentation is shifting, as it should.

And no one is running a little bit scared from anything Frost is doing in Lincoln, whose third season expectations were to just get the Huskers playing somewhere in December or January. The degree of difficulty for both of them – excellent coaches, by the way – is beyond what anyone leading a major program was faced with heading into 2020.

RELATED Sympathy for the Devil

Since we’re writing impossible scripts, if Harbaugh and Frost switched campuses they may find greater success. Frost might be given latitude Rich Rodriguez could have only dreamed of in Ann Arbor, and no one would expect him to be Pretend Bo. The old guard would definitely find him more palatable than the last novel outsider.

Harbaugh found quick success in San Diego and Stanford. His dream job has the shortest runway of all his other possibilities, including the NFL. He would have Nebraska back at their Bo-win levels without needing several seasons, just as he did in Ann Arbor. Frost and Harbaugh make $12.5M between them to be dreams hires where the storybook ending is forever unwritten.

Ohio State finding success with a guy from New Hampshire and no previous head coaching experience is a datapoint that supports the entire concept of a pre-determined dream coach is overrated and potentially destructive. Anything short of the dream will be disappointing. The perfect coach for every program is discovered in real-time, not preordained.

It exists. But no one knows who that coach is until he’s already hoisting trophies.

‘Ratched’ review: One of the most famous literary villains gets a plotline we didn’t ask for

A Letter From the Editors of the Book Review