How the USPS Chooses Its Literary Stamps 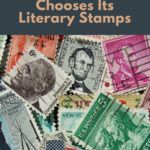 One of the biggest struggles for the United States Postal Service (USPS) stamp program is awareness. At a time when the USPS needs support both financially and politically, it’s important for consumers to know that a lot goes into everything that makes the post office run. Including—even especially—the stamps.

You walk into the post office with a stack of envelopes and order a book of stamps. Perhaps you scan the designs available and choose the one that’s most appealing, or the one that makes you smile. Maybe you just turn the package or letter over and they stamp it for you, and you never even see the designs applied. Maybe, every once in a while, you receive an envelope with a special stamp affixed, and it holds your attention for a moment.

Sign up to receive Check Your Shelf, the Librarian’s One-Stop Shop For News, Book Lists, And More.

Stamps Services at the Postal Service produces more than 14 billion stamps and generates an estimated $4.5 billion in revenue each year. The Postal Service relies on the sale of this postage, as well as from products and services, to fund its operations—receiving no tax dollars for its operating expenses. The USPS provides an extensive amount of information on the selection process, criteria, and artwork of stamps, as well as additional information about them, on their website, but they’re always looking to expand awareness of the hard work that goes into the stamps that send your mail.

“Ultimately, stamps are just a ticket to show that you paid for your service,” said Bill Gicker, director of stamp services at the U.S. Postal Service. “But we make them so much more.” Book Riot spoke to Gicker about the process of creating a stamp, the Literary Art stamp series, and other bookish stamps, and what goals the USPS has behind the artistic and historical work they do with their stamps.

Creating a Stamp: A Democratic Process

The first thing to know: the process of choosing and designing a stamp starts with you. “We receive about 30,000 letters a year from the American public,” Gicker explained. “Some are petitions, some are just single letters, some are from classrooms. But we get those, and someone on my staff actually goes through every single one of them.”

Get special offers, new products, and interesting bookish stuff from the YA world.

As long as the subject matter fits the criteria outlined on the USPS website, the public’s ideas are brought to the Citizens Stamp Advisory Committee. The criteria includes a few aspects people might not realize before submitting. For example, beginning in 2018, proposals for a deceased individual will be considered three years following their death, and living people are not currently considered. Events of historical significance are considered for commemoration on anniversaries in multiples of 50 years.

The committee, founded in 1957, reviews every single topic presented. Topics chosen for consideration are added to an ongoing holding bucket of ideas, which the committee then uses as they brainstorm to fill out each year’s program of stamps. Sometimes, they go with a topic as it was suggested, but often it involves some creative brainstorming—for example, combining four people who were separately suggested into one single theme.

“It’s an interesting process that’s very democratic in its make-up,” Gicker said. “The committee never sees who sent anything, or how many people submitted that idea. All they know is when it came in, and then they review it purely on its merit.”

Once a project is chosen, the USPS works with four contracted, award-winning art directors to connect with photographers and artists, purchase any rights for existing artwork or photographs, conceptualize a design, and create the stamp. When the design is complete, the postmaster general must sign off on both subject matter and design.

The USPS works three years ahead. Right now, Stamp Services is working on the program for 2023. The time frame is not only to allow for time to optimize the design: the USPS works with estates, rights holders, partners, and families to capture all the subtleties and nuances of the rights clearance process and design.

“Really the people who represent those featured know the most, and it’s their chance to make sure that what was important to that person is conveyed and told in the most accurate way possible,” said Gicker. “We allow that time so we don’t make mistakes, and so that we can really build a positive experience for everyone involved.”

It’s very important to the USPS that they get the story right, and that the release of a stamp is never something that would cause controversy or bad news to people close to the subject. “We can build a relationship, tell the right story, maybe dispel any untruths that have snuck into the story over time,” Gicker said. They want each stamp to honor the country and honor the person involved, and so they take this period of time to really dig in.

In 2004, the Literary Arts series featured Moss Hart, Broadway composer and author of Pulitzer Prize–winning play You Can’t Take It with You and the play The Man Who Came to Dinner. While designing the stamp, the USPS worked with his wife, Kitty Carlisle, a stage and screen actress, singer and spokeswoman for the arts, best known as a regular panelist on the television game show “To Tell the Truth.” When they had the art ready, they went to her home in New York City.

“When we showed her the art, she teared up. It was such an emotional moment, and it made her so happy,” said Gicker. “To know that you’re making a family happy, people who cared about the people that you’re working on—happy is a great thing.”

Bill Gicker has been involved in Stamp Services since 1998, and has managed the development of more than 700 stamp releases and 1,900 stamp designs during his tenure.

“One of the things that we do with our stamp program is try to appeal to the entire nation,” Gicker said. “We’re trying to represent all of American culture, and everything that goes into it, in the broadest way possible. Even in one year, we can’t do that. So over the span of a series, we’re trying to show great diversity.”

The Literary Arts series has featured an author on a stamp every year since 1979. They try to choose a wide range of literary figures, both in terms of diversity of gender, race, and in subject matter. The first stamp in the series featured John Steinbeck. Artists featured have included Richard Wright, Edith Wharton, Ernest Hemingway, Marianne Moore, Tennessee Williams, Zora Neale Hurston, James Baldwin, and Katherine Anne Porter. The stamps feature a portrait of the author with a background inspired by the themes of one or all of their works.

“We don’t shy away from artists that people wouldn’t probably instantly recognize. We see the stamp program as an educational piece for the country—part of our history,” said Gicker.

Some of the more popular stamps in the series have included poet Walt Whitman and author Ralph Ellison. One of Gicker’s personal favorites was the stamp honoring Flannery O’Connor, released in 2015. “She wrote about the South, and her writing was very ethereal and some might say a little creepy, dark,” he said. Often these stamps try to capture a scene from one of the author’s iconic works, but for this one, artist Sam Weber portrayed O’Connor with a background of peacock feathers. “He casts a particular light on a subject matter that gave an air of mystery and mystique.”

Another departure in design was the stamp honoring Julia de Burgos in 2010. De Burgos was a poet, civil rights activist, and Puerto Rican nationalist of mixed Hispanic-African ancestry. Her poems, including works such as Poema para mi Muerte (My Death Poem), Yo Misma Fui Mi Ruta (I Was My Own Path), and Alba de Mi Silencio (Dawn of My Silence), reflected her love of her country and her anguish through depression, alcoholism, and three broken marriages.

The art style of the Literary Arts series leading up to that point was often very realistic—often by Michael Deas, whose style was very detailed and real-to-life. But for Julia de Burgos, they departed the hyper-realistic look in favor of a more expressive one. “We found at the time that it was very exciting, a really fresh way of approaching the series, that seemed very appropriate,” Gicker said.

The Literary Arts series stamps are now 3 oz postage stamps, and are worth 85 cents. Outside of the 85 cent postage stamp, the USPS has chosen more than once to feature authors, artists, and other bookish themes outside of the series.

For example, a Forever stamp was released this past May honoring the Voices of the Harlem Renaissance. The stamps featured writer, philosopher, educator, and arts advocate Alain Locke; novelist Nella Larsen; bibliophile and historian Arturo Alfonso Schomburg; and poet Anne Spencer. The stamps, created by artist Gary Kelley and art director Greg Breeding, featured pastel portraits of the four honorees and incorporated background elements that reflected the increased interest in African culture, history, and aesthetics shown by writers and artists of the Harlem Renaissance.

Another special project was a joint issue with the United Kingdom’s Royal Mail postal service. The stamps honoring children’s book illustrations were featured in both countries. The stamps featured Wilbur from Charlotte’s Web, the Very Hungry Caterpillar, Curious George, Olivia, and Frederick the Mouse. “That was a very exciting one for me,” Gicker said, “because I loved books as a kid, and had and still have a lot of picture books.”

The goal of literary stamps, and other stamps as well, is to educate and to intrigue. Stamps Services strives to represent the best of America and its culture, and diversity as such. Part of that is treating the stamps like miniature works of art, meant to pull people in and capture their interest. “We can’t tell an entire story with a stamp—it’s a one inch by one inch square,” said Gicker. “We see it as the tip of the spear. We hope to intrigue people enough that they look into the subject matter, start their own research. Our job is to intrigue people enough to go, ‘Hm, who’s that?’ and then dig a little deeper.”

How does bitcoin work and why is Elon Musk buying it?