John Scalzi on messiahs, the apocalypse, coronavirus and religion in science fiction

(RNS) — While finishing his novel “The Last Emperox” this past fall, science-fiction writer John Scalzi began to imagine how people would react to a future cataclysm that would disrupt their entire way of life. Some would go through five stages of grief — denial, anger, bargaining, depression and acceptance. Some might cancel contracts or business deals, saying the cataclysm was an act of God. Others might argue some people have to be sacrificed for the greater good.

Then, just as the book was about to debut, all those things started happening in real life.

“It’s really weird to be on point about what’s going on currently in the world despite having written the book six months ago and all the events taking place 1,500 years in the future,” said Scalzi. “It’s a little disconcerting.”

“The Last Emperox,” due out Tuesday (April 14), is the final installment in “The Interdependency” trilogy and tells the tale of the last days of a far-flung space empire as its way of life is falling apart. The empire’s prophet-ruler, Cardenia Wu, also known as Grayland II, tries to save as many people as she can with a small group of allies, while her powerful enemies try to undermine her every move for their own benefit.

It’s a page-turning romp of a space opera in which religion plays a significant role. And at a key point, church red tape helps save the day.

Scalzi is the New York Times best-selling author of more than a dozen books, including “Old Man’s War,” “Red Shirts,” “Lock-In” and “The Collapsing Empire.” Religion News Service spoke to Scalzi from his home in Ohio. The interview has been edited for length and clarity.

This book was like a smorgasbord for religion reporters. I about fell out of my chair at one point, when church bureaucracy ends up helping save the world.

It’s funny; I am not someone who is particularly religious or spiritual. But religion and spirituality actually come up quite a lot in my books. In “The Android’s Dream,” there’s the Church of the Evolved Lamb. In the “Old Man’s War” series, some Mennonites end up saving a colony. 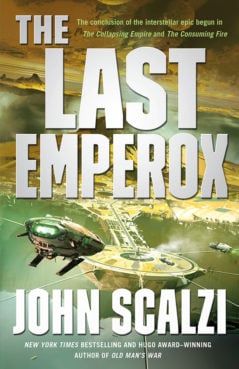 So why wouldn’t you represent them?

Some of your books also have these over-arching religious themes. “Old Man’s War,” for example, is about reincarnation, while “The Ghost Brigades” is all about predestination versus free will.

That’s true. I mean, I have a philosophy degree, right? And beyond that, I have a personal inclination to think about what it means to be an independently acting and thinking moral agent in the universe. We all, through our decisions and choices, bend the arc of morality and justice in our universe. Sometimes we bend it the wrong way, but we are definitely bending it.

A lot of that gets into my work. I don’t try to beat people over the head with it, but at the same time, how could it not be in the work if you are trying to represent humans to any degree of complexity?

The funny thing is, the story model I have for a lot of this stuff is Looney Tunes. On one level, they work for the kids — animals being flattened, explosions going off, nobody gets killed but it’s funny. And then there are other levels where there is satire. There are more subtle forms of humor, and they’re all spliced in there.

For example, with the “Lock-In” books, they’re straight-ahead murder mysteries. Someone has died and you’ve got to figure out how that has happened. And oh, by the way, one of the investigators is someone who walks around in an android body, because this is science fiction.

So if all you want is the murder mystery, there’s the murder mystery. But on the other hand, if you want to be thinking about issues of disability and community and gender and the tension between rich and poor in a country, particularly as it relates to who gets services and who doesn’t, it’s all in there, too. I’m not going to beat you over the head with it, but there it is.

You’ve talked about Frank Herbert’s “Dune” as an influence on the “Collapsing Empire” series, especially since it features battles between great mercantile houses. But both books ask the question, what does it mean to be a messiah?

“Dune” was absolutely one of the influences of this series. I’ve been very upfront about that from the beginning. Even to the point where when I originally started writing, I tried to write it in a Herbert-esque style. That lasted for about three or four chapters until I realized, Oh, no, no, no. This is bad. Don’t do that.

His messiah, like mine, is reluctant. But his messiah is also undeniably tapping into powers and abilities that are beyond those of a normal person. He is the “Kwisatz Haderach” — he can look all the way back in time, and he has this ability to predict the future. He does assume all the supernatural aspects of messiahhood.

Cardenia is not supernatural. When she begins to have access to what are effectively supernatural powers, she loses her humanity and abdicates a lot of the power and the mantle of being a ruler. That raises an interesting question about what it means to be a messiah — because being a messiah really does mean being a supernatural leader and ruler.

And she specifically repudiates that.

And in “Dune,” the coming of the messiah brings an apocalyptic end of the world. Whereas in this book, Cardenia is trying to avoid an apocalypse.

In “Dune,” Paul Muad’Dib sees all the threads that go on in the future and recognizes that no matter what, millions are going to die when he effectuates the jihad. And yet for his own reasons and for, you know, the reasons he thinks are important, he becomes that messiah anyway. Because in his mind, he thinks, if I become this messiah, at least I have some control over how this inevitable bloodletting will proceed.

Cardenia is almost the mirror image of that. It would be so much easier to say you can’t make an omelet without cracking some eggs. Instead, she tries to become the person who saves as many people as possible.

And once again, this relates to where we are in the current world.

The leadership of every nation is dealing with a virus that is not interested in politics, is not interested in any human goal, desire or interest. And the reactions of our leaders become a crucible of character. Ultimately, every single person in power sooner or later has to decide which is more important to them, the people or the system.

As a writer, I think it’s very clear where my particular interests and sympathies lie. We’ll see if, uh, you know, our current set of leaders agree with that or not.

Taking the middleware out of high performance computing

Taking the middleware out of high performance computing

What You Need For Your Quantum Computing Pilots In 2021