Readers’ Favorite announces the review of the Fiction – Fantasy – General book “Cause of Death: ???” by K.N. Salustro, currently available at http://www.amazon.com/gp/product/B083S2MQZL . 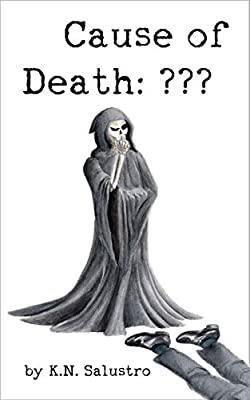 Death is concerned when he discovers the killing of a mortal soul that should have still been alive. Not only does this reflect poorly on his work methods, but it also threatens the continued existence of the mortal world, his co-creation with Life and Destiny. If the resulting trouble is not contained soon, an apocalypse is due and no one wants that. To abate the chaotic fallout, he dons a detective’s cap and rushes to the scene of the crime. Cause of Death: ??? by K.N. Salustro covers the somewhat unusual investigation that follows. It takes the reader through the domiciles of Eternity, where Death calls on old friends and adversaries. The problem is that he shares a complicated history with some of the suspects.

“As a fan of both Discworld and Sandman, I was intrigued to see how this personification of Death compared to other favorites. And I wasn’t disappointed. The grungy, overworked, coffee-addicted Death of this story grows on you. I liked some of the other immortal influencers too, particularly Sloth and Hope. And War? Well, he could be fun and would probably attract a considerable following for his antics and energy, if the story ever made its way to YouTube or Netflix. What rocked for me was the way these aspects functioned and interacted. Not only was the story logic solid and consistent, but it was also underpinned by motivational forces so strong that they tended to shape the environment they occupied. I like the concept of the reapers. I couldn’t help wondering whether Tibetan lore influenced their equine nature. If so, that’s a nice touch. While there was an occasional meandering in pace, it was not enough to spoil my enjoyment of the story’s unique approach. Cause of Death: ??? by K.N. Salustro should be a fun read for fans of fantasy but may not be for those with rigid ideas about religion and the afterlife.”

You can learn more about K.N. Salustro and “Cause of Death: ???” at https://readersfavorite.com/book-review/cause-of-death/1 where you can read reviews and the author’s biography, as well as connect with the author directly or through their website and social media pages.

What trashy novels taught me about life | Books