The Washington Post – It was the fall of 2017, and Keanu Reeves had been carrying around a character in his head. The actor so associated with portraying a phalanx of dark-clad fighters kept envisioning a world-weary warrior whose birth predated even human language. Who knows, he thought, this character just might be a future film role.

But that was before he decided to sit with the suits at Boom! Studios. The savvy Los Angeles publishing company knew: One does not simply walk into a conference with Keanu. Be prepared to engage his perceptive questions and passionate physicality.

On a morning Zoom interview from Los Angeles last week, Reeves pithily recounts that meeting of like minds: “They went, ‘Comic book.’ I went: ‘Yeah! Why not? That sounds amazing!’ “

And just like that, the man who has long performed on soundstages and rock ‘n’ roll stages decided to dive into something new. Reeves has published beautiful art books – and even played a comics-sprung detective of the occult (Constantine) – but nowhere on his four-decade resume was a credit as a comic-book author.

That changes this week with the recent release of the first issue BRZRKR (pronounced Berzerker), a limited 12-issue series, co-created with Matt Kindt and artist Ron Garney. The comic, centring on a raven-locked title assassin who unleashes hyper-stylised violence with supernatural ability, stirs comparisons to Reeves’s own cinematic battlers, including Neo in the Matrix movies and title fighter John Wick in that high body-count franchise. Yet Boom! assures that its comic series will blaze a different trail.

Stephen Christy, the studio’s president of development, points to Reeves’s pitch: “He said: ‘I’ve done kung fu in The Matrix. I did ‘gun fu’ in John Wick. And now I want to create a whole new hyperviolent style of fighting with BRZRKR.”

The first issue’s bloody hand-to-hand combat, so visceral and viscous, spares no crimson ink. As this 80,000-year-old fights his way across the epochs while trying to uncover personal truths, he embodies Reeves’s vision: “I had an impression of a guy in a Viking kind of battle who could punch people’s chests and their backs and rip people’s arms off.” 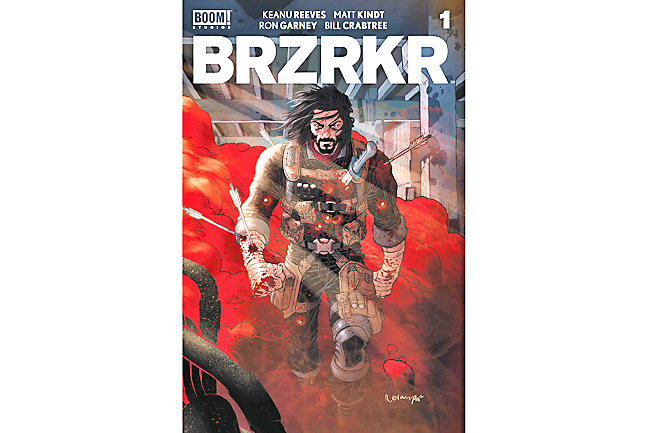 To dramatise this Highlander-meets-Logan fighter during the Boom! introductions, Reeves stood and acted out potential scenes, even flashing some fighting moves – pitch meeting as full-body immersion.

The approach was similar to when Reeves first met with Pixar for Toy Story 4, striking action poses to play Duke Caboom. “I’ll get in touch with a feeling or thought – or a feeling-thought,” said the bearded Reeves, wearing a black Levi’s jacket and starkly backdropped by a near-white wall – Zoom room as Zen room. “I’ll express it and it tends to come out through the filter of the character.”

BRZRKR opens with maximum carnage and minimal verbiage. The creative team promises more textured themes are on the horizon. Discussing the comic’s scope, Reeves riffs until he’s in full mellifluous monologue: “We do want to take on morality, ethics, peacetime, war, violence, whose side, what’s right, what’s wrong, truth, fiction, memory, what do we believe in, who are we, with not only violence but also love – and then our own identities and who we are as humans.” Whoa.

To carry out his new line of work when not shooting Matrix or Bill and Ted sequels, he needed to be teamed with a veteran of graphic narrative; Kindt, an acclaimed writer and artist (Mind MGMT), got the call. To prepare Reeves for any potential disappointment, Kindt told Reeves how this process goes: They would turn in a script, then the art for their story would come back and, well, the writers would not have complete control. You see, Keanu, that’s just how this highly collaborative business works.

When Kindt finished his explanation, Reeves just looked at him and said: “Matt. I make movies.” Kindt cracked up.

The writers met in person early on, bonding over some of their favourite cartoonists (Frank Miller and Geof Darrow) and comics (The Dark Knight and Watchmen). Once the pandemic hit, the creators texted and Zoomed for hours on end, plotting scenes and fine-tuning dialogue and joyously spurring each other on. And Reeves’s teammates agree that his truest gift as a comics storyteller is his ability to vividly inhabit a character – what Kindt calls stoking “the heat” of a creation.

Boom! wasn’t precisely sure, though, just what it had on its hands – how many readers would embrace this series? – so it launched a Kickstarter to back the books. The studio hoped to use it tosell perhaps USD400,000 in preorders; instead, it was USD1.5 million.

Now the natural question becomes: Why not adapt the comic into a film?

Reeves, the Internet’s favourite “immortal” movie star in fan posts and memes, said they are looking for a movie partner to adapt the adventures of his immortal character. So would the actor consider playing himself? “That was my intention – I’m a little precious about that,” he said, laughing as he drops a quick lisping impression of Gollum. “I would love to play the role.”

Kindt interjects during the Zoom call: “You’re not going to have to try out for that.” The three creators laugh easily. (Reeves is also quick to praise the comic’s letterer, Clem Robins, and colourist Bill Crabtree, who coyly created a red-and-blue pill in the first issue as a visual wink to The Matrix.)

Reeves says he doesn’t yet have a dream director in mind. Yet Garney, who worked on the Francis Lawrence film I Am Legend, has strong thoughts. He cites two filmmakers who have previously directed Keanu action vehicles – Lawrence and Chad Stahelski – but thinks Reeves should take the professional step and direct himself.

“I think he’d be a natural, and he has the experience at this point to do it and this is his character,” the artist said. “There’s no one better to pull it off than him.”

Literary Diary: When you’re writing to the man in red, please choose Irish