The Way Home, by Murray writer and MKyTribune columnist Constance Alexander, has been published by Finishing Line Press of Georgetown. The spoken word opera was inspired by a collaborative project on end-of-life issues between Alexander and WKMS-FM, the National Public Radio affiliate in Murray.

Throughout the project, Alexander interviewed two women, one from Murray and the other from Trigg County. They shared their experiences about dealing with cancer, and even though they never met, their lives became entwined.

Because of a pre-existing condition – a bout with breast cancer when she was in her thirties — one of the women could not afford health insurance. Thirteen years later, when diagnosed with ovarian cancer, she was confronted with exorbitant medical costs and a difficult array of healing and palliative care measures. 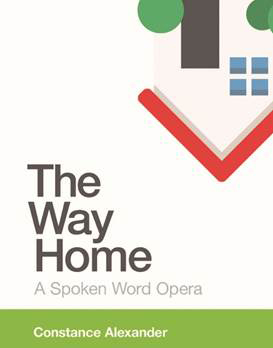 The other woman, a senior citizen from Calloway County who had been diagnosed with Stage IV Breast Cancer, read about the travails of the Trigg County woman and contacted Alexander about starting a fund-raising campaign to help defray the enormous financial burden associated with fighting cancer.

Interviews with the women chronicled the progress and setbacks they encountered over a 2-year period. Their stories were the focus of a series of newspaper articles and episodes of “Promises to Keep,” the documentary series Alexander produced with WKMS-FM.

From their words, Alexander developed The Way Home, a performance piece which she calls a spoken word opera. The writer accepts no royalties for performances, with the provision that all revenue raised is applied to causes like breast cancer, the uninsured, women’s health issues, hospice, etc.

The term “spoken word opera” is an apt description, as the work reflects many of the qualities of an opera – arias, duets, a chorus, recitative – but it is meant to be spoken. Designed as readers’ theatre, it is to be read rather than memorized, thus allowing performances by actors with a range of abilities and a span of ages, with the focus on the text and the voices, not on sets, blocking, costumes, or props.

When Judy Sizemore, a writer and arts activist from eastern Kentucky, was diagnosed with breast cancer, performances of The Way Home raised money that helped defray some of the costs of her treatment. “When I think back to that time,” she said, “a line from The Way Home shines like a beacon: ‘There are people along the way who say, Come this way. There are ways through all this.’”

“Constance Alexander is one of those people along the way,” said Sizemore. “Her spoken word opera is a gift to be performed not only by professional across but by friends reaching out to friends, by strangers reaching out to strangers, by communities reaching out to reassure, to comfort, to guide us all home.”

An award-winning poet, playwright, fiction writer, and civic journalist, Constance Alexander served as artistic director of the West Kentucky Playwrights Festival for eight years. Her plays have reached national and international, including the renowned Fringe Festival in Edinburgh, Scotland. Her published works include five books of poetry and a memoir. Her creative work has been supported by numerous grants, fellowships, awards, and residencies Kentucky Arts Council, Kentucky Foundation for Women, Ragdale Foundation, Robert Wood Johnson Foundation, Newspaper Association of American, Kaiser Foundation, and the Pilgrim Project.

The Way Home is available through the publisher at www.finishinglinepress.com for $14.99 plus shipping, and through Amazon. Constance Alexander can be reached via email at constancealexander@twc.com.

Authors have earned $1.1 Billion since the launch of Kindle Unlimited