New Book is Window to Atlanta’s Jewish Past

For those in search of a quick and comprehensive historical overview of Jewish Atlanta, Jeremy Katz’s new book is a good place to start.

Katz, who manages the Cuba Archives for Southern Jewish History at The Breman Museum, has put together a thoughtful photographic history of Jews here over the last 175 years. 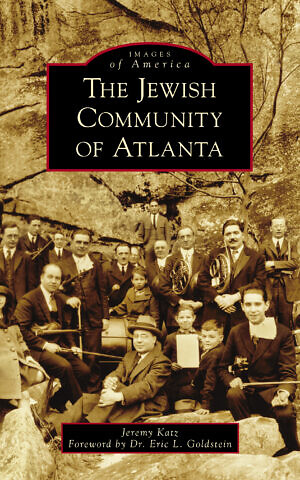 Cover of “The Jewish Community of Atlanta” is 1923 photo of the Atlanta Symphony Orchestra founded by the son of an Italian rabbi.

The slim paperback, “The Jewish Community of Atlanta,” chronicles the growth of the community with the birth of Caroline Haas in 1848 in what looks, on a surviving postcard, like a simple wood building. She was the first Jew born in Atlanta and reputedly the first white child born here.

The book concludes with pictures of Bernie Marcus’ Georgia Aquarium and Arthur Blank’s Mercedes-Benz Stadium. According to Katz, that kind of growth symbolizes the strong influence Jews have had on the development of the entire city.

Eric Goldstein, the Emory University historian and head of The Tam Institute for Jewish Studies there, writes in his introduction that the book is a “testament to the growth and dynamism of Atlanta Jewry, which continues to make history every day.”

Fast moving events this year have already dated the book, which came out in January, Katz said. Because of publication deadlines, he was unable to include the election of Jon Ossoff, for example, as Georgia’s first Jewish senator, and its impact on national politics. 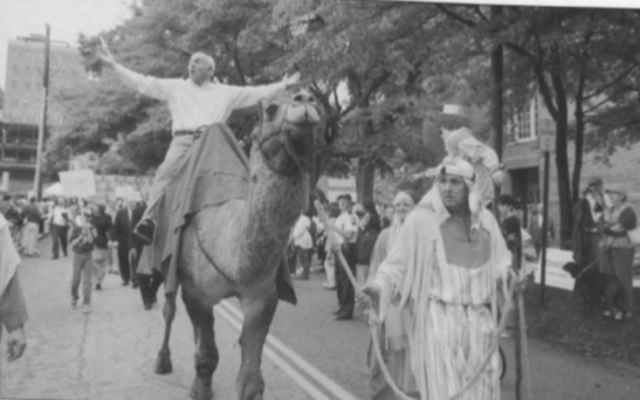 Steve Selig, former president of the Atlanta Jewish Federation, riding a camel in 1998 during a parade honoring Israel’s 50th anniversary.

Still, Katz believes that the book represents not only the growth of the community, but the large and important archive of Jewish life that is housed at The William Breman Jewish Heritage Museum here.

“In the ’80s, the archives just filled a closet in the old Federation building on Peachtree Street and has since grown into this regional powerhouse,” Katz pointed out.

According to Katz, there are over 1,000 oral histories, tens of thousands of photographs and millions of documents making it one of the biggest collections of its kind in the country.

“We are the largest repository for Jewish history in the Southeast. We have a very diverse collection, not only in terms of content and format, but also in terms of the demographics, as well as the timeline. We have materials dating back to the colonial period documenting Jewish life in Savannah all the way up until the pandemic.” 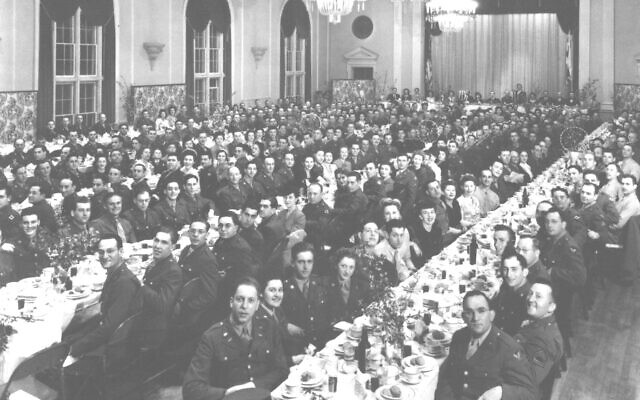 Jewish servicemen celebrating Passover in 1944 at the Jewish Progressive Club in Atlanta. They were served by the Zionist District, Mayfair Club and members of The Temple.

There are four hundred pieces of clothing and textiles and another thousand artifacts and items of everyday Jewish life, including 18 that are in a special exhibit now at The Breman. Each item in that showing represents a major turning point in the life of the Jewish community here.

The book, the special exhibit and the massive archive, Katz believes, have taken on special significance at a time when we have been inundated with information online, not all of which is accurate. Primary sources of information, Katz pointed out, gives people the tools to do their own historical research and make up their own mind about what is true and what is not. 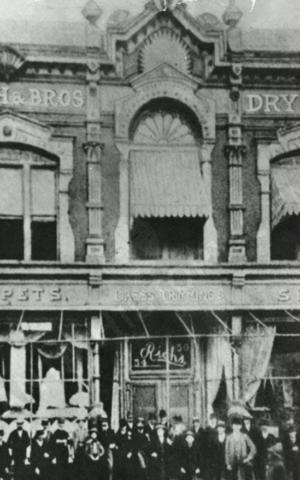 Rich’s department store, started in 1869 by Morris Rich and his brothers, became an Atlanta retail institution.

“I think our archives are on the front lines of combating misinformation,” he said. “We’re presenting the public and creating access to those raw primary sources so that folks can make their own secondary interpretation using the facts and using those primary sources.”

The archives at The Breman Museum are in the final stages of an extensive makeover that will allow the public, along with educators and historians, greater access and flexibility examining all the items in its archives. Later this spring the museum is planning to roll out new software that will integrate The Breman’s collection of printed material with its media collection and its oral history archives.

“We’re one of only two archives in the country that have this integration between this media catalog system,” Katz pointed out. “It’s a really powerful tool that allows for the media of an oral history, for example, to be displayed alongside a timestamp transcript index so people can jump to any point in the interview. They can search across it for keywords and jump right to that point in the interview. It’s really powerful stuff.”

All of which, Katz believes, makes the new book he’s just written and these newly accessible archives a starting point to explore Atlanta Jewish history.

“If you want to know about the present and be well-informed about the future, you need to understand the past and history.”

Where Computing Is Headed—Beyond Quantum