New book maps out the stories of 100 Detroit change agents, leaders, and entrepreneurs

For years, Bernita Bradley has been fighting for equity in schools. The social entrepreneur runs The Village PCL, an outreach and recruitment team that makes sure parents have a seat at the table so when decisions are made about them it’s not without them, and she blogs about education and the resilience of families at Detroit School Talk.

So it’s no surprise she would be nominated for a new project that highlights Detroit leaders and changemakers.

“So many people recommend me for the work that I do,” she says. When she heard about the Human Atlas project and the artist behind it, Marcus Lyon, who was planning to feature Detroit leaders and change makers in the latest iteration (the previous two Human Atlases focused on Brazil and Germany), she wasn’t really interested in being in an exhibit and having her photo taken.

But after she heard the project would also include mapping ancestral DNA, she thought, “I have to be part of this.” For the past six years she’s been looking for her mother’s family. Her mother was a foster child, so all Bradley knew was her mother’s grandmother’s name.

“I just feel it’s important for everybody to know where they come from, to have a perspective on who they are,” she says.

Bradley and her unique story is one of 100 featured in “i.Detroit: A Human Atlas of an American City,” which officially launches on Oct. 15 through a virtual event featuring a conversation between Channel 4 Detroit’s Rhonda Walker and Lyon, as well as a panel discussion with community leader Shirley Stancato, DNA genealogist Kenyatta D. Berry, historian Ken Coleman, and featured i.Detroiter and cultural producer Ozzie Rivera.

With the Human Atlases, “we’ve created this model, this process of mapping, a group of nominated exceptional change agents in specified jurisdictions through visual, spoken, and genetic information to tell a deeper story about how we self-author and how we co-author a more hopeful future,” Lyon says.

Funded by the Kresge Foundation and supported by the Charles H. Wright Museum of African American History, the book features well-known names from Marsha Music to Rashida Tlaib, but also the “unsung heroes” and younger Detroiters like Crystal Bernard, Lyon points out. 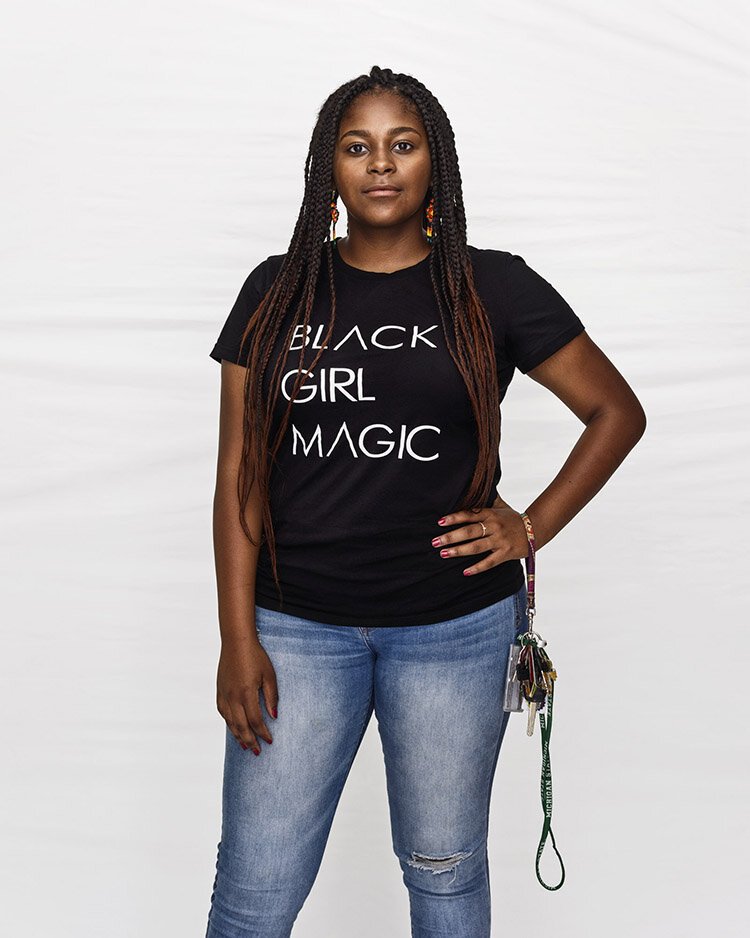 Crystal Bernard is one of the 100 Detroiters featured in “i.Detroit: A Human Atlas of an American City.”

Growing in a household with Detroit organizers General Baker and Marian Kramer, Bernard, a student studying social relations policy and international relations at Michigan State University, has been a lifelong social justice warrior.

“The passion to do those things, and to continue the fight is the very thing that allows me to be alive and to make my own decisions, and to live as much as a dignified life as I can under our status quo,” Bernard says. “So I feel like it’s my responsibility to continue to carry that legacy of

resistance. … It’s a necessity to be engaged in our political and social structures so that I myself can liberate myself, and through that process be one the guides to help liberate others.”

To be in such good company is an honor, she says.

“Detroit has always set the bar for a Black community, what it means, how we interact with local and state government, how we care and show up for other people, how we cultivate our beloved communities,” she says.

Through a six-month nomination process, the 100 Detroiters were selected by a group of diverse group of local leaders “doing brilliant work,” Lyon says, who were key because they were his “gatekeepers to make the right decisions.”

Detroit became the third location in the Human Atlas after he met Mark Davidoff, chief executive officer of The Fisher Group, at a leadership conference in England. Davidoff was interested in bringing the project to Detroit after seeing the Brazil and Germany iterations.

One of the project’s goals is to create a curriculum for Detroit public schools to inspire a new generation of change makers. He’s also created a new website, ahumanatlas.com, which also launches on Oct. 15, where the photos, soundtracks, and DNA charts will live to make the project more accessible to those who don’t have the means to purchase the book, which costs about 200 euro (or about $235).

For Bradley, she hopes others are inspired to discover their own stories as well, “because there is such a gap between Black people in their connection to their history, because our history was intentionally erased, and is constantly trying to be erased.”

She continues that “I really just hope that people look at it and just really see their ability to make change in their community. … And I’m hoping that the book becomes like a storytelling hub for what Detroit really means right now.”

Bernard also points out that while it’s an honor to be included in the company of 99 other remarkable people, “it’s important to mention it’s not necessarily about me. I know so many other Crystals from Detroit, who’ve grown up in very similar circumstances, doing very similar things. And so I hope that I won’t be looked at as an anomaly, but moreover, as a representative of a community.”

To attend the book launch, RSVP through Eventbrite. For more information about the project, go to Marcus Lyon’s website.

Essay books for UPSC exams: Get better at writing essays in exams | Most Searched Products

Essay books for UPSC exams: Get better at writing essays in exams | Most Searched Products

A bookworm starts a novel chapter in 2020