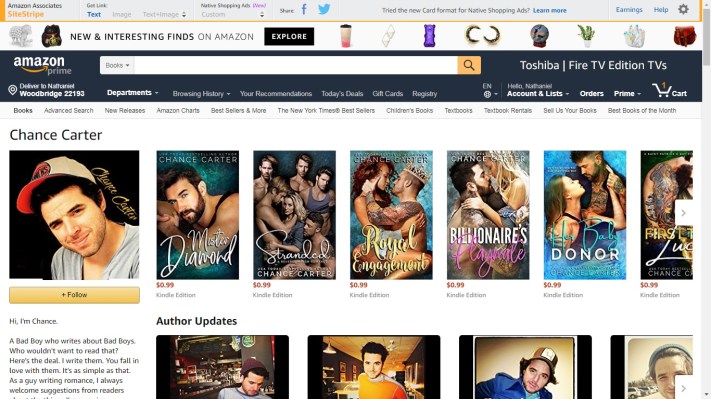 A few levels past the bestsellers and sci-fi/romance/adventure titles on Kindle Unlimited, in the darkest corners of the Kindle Direct Publishing market, there are books that are made entirely out of garbage designed to make scammers hundreds of dollars a day. One user, who called his or herself Chance Carter, was one of the biggest abusers of the KDP system and, more important, made over $15 per book they uploaded to the system, over and over, for books that contained no real content.

Carter, according to the Digital Reader, would create large novels out of other books. The books, which were simple hack jobs written by Fiverr writers, were hundreds of pages long and, on the first page, featured a recommendation to flip to the last page to get a free giveaway. KDP pays authors for both paid downloads as well as for pages read and it doesn’t sense reading speed, just the highest number of pages reached. Therefore Chance’s “readers” were instantly sending him or her about twenty dollars a read.

The way that the book-stuffing con works is that scammers stuff lots of extra content into an ebook before uploading it to Kindle Unlimited, and then trick readers into jumping to the end of the book.

Thanks to a flaw in the Kindle platform, namely that the platform knows your location in a book but not how many pages you have actually read, the scammers can get paid for a user having “read” a book in Kindle Unlimited by getting the user to jump to the last page.

So how are clever authors getting around Amazon’s new review policies? By giving readers a chance to win some Tiffany jewelry of course. All you have to do is purchase & review Chance’s new book on Amazon. This is so ridiculous pic.twitter.com/k3l9Z25jPa

This sort of KDP scam is actually quite unusual. Amazon has worked to prevent scams like these from taking cash out of the KDP “pool” – a multi-million dollar account that is passed out to the best KDP authors – but this one was so long-running and ingenious that it’s not surprising that it took so long to pull these books from the store. Interestingly, the flip-to-end scam doesn’t quite work on newer Kindles but still works on older, non-updated Kindles which makes it still a lucrative scam.

Chance, for his part, offered free Tiffany jewelry if you flipped to the end of his books. This was, obviously, against KDP rules.

Carter and his books are gone but book stuffers like him still exist. While it’s not a crime per se, it does muddy the Kindle ebook waters and brings garbage content into the market. While most of us wouldn’t fall for these cynical tricks, plenty will and that makes it a danger to readers and a boon to scammers.

Jael Richardson discusses her new novel ‘Gutter Child’: ‘What happens when you grow up in a world that’s designed for your failure?’

Book Review: "In the Land of Good Living" - Satisfying Your Gonzo Curiosity

Mystery books: A Murder On Malabar Hill and other top mystery-thrillers by Indian authors

Mystery books: A Murder On Malabar Hill and other top mystery-thrillers by Indian authors

What to Cook This Week