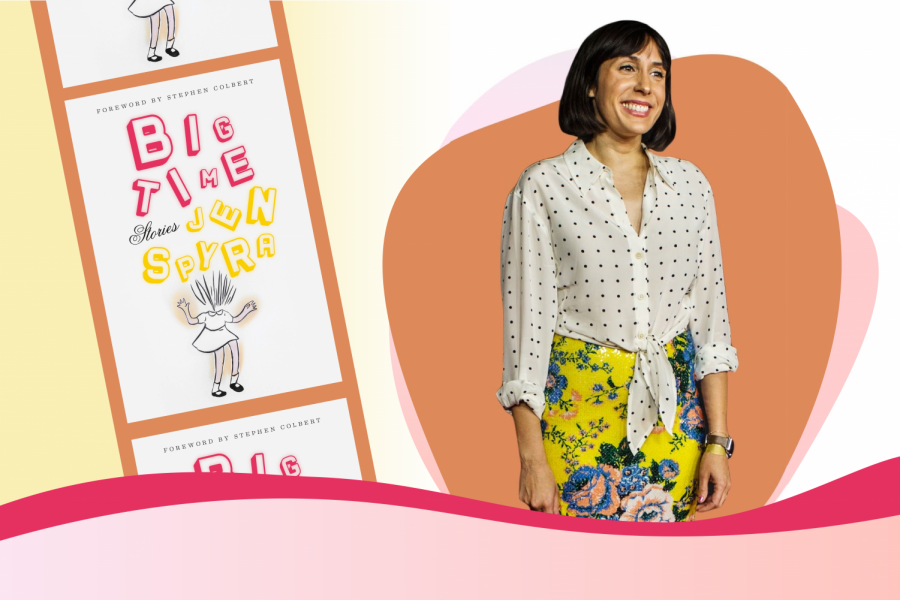 Jen Spyra (Communication MFA ‘12) with her debut book, “Big Time.” Spyra talked about her career in comedy writing in an event Friday afternoon.

In the eyes of Jen Spyra (Communication MFA ‘12), successful comedic writing boils down to two key elements: confidence and perseverance.

“Confidence in your comedy is what keeps you going,” Spyra said. “I gathered enough nuggets of confidence from myself and those I had worked with, and that is what keeps me willing to pursue new projects.”

In a Friday afternoon webinar hosted by Northwestern School of Communication’s Office of External Programs, Internships and Career Services, Spyra talked about her career in comedy, as well as her years as a writer for The Onion, The New Yorker and the “The Late Show with Stephen Colbert.” She also discussed the release of her debut comedy book, “Big Time.”

Spyra first dipped her feet into comedy through her improv club at Barnard College.

“I’ve found that often, some of my favorite comedic writers were not comedy people,” Spyra said. “I never watched late-night, and I had no interest in it. I was actually a very quiet and shy person.”

She added the improv club taught her about “comedic adaptability,” which is the ability to change jokes at the last minute given breaking news, a skill Spyra called essential for successful comedic writing.

Spyra described her writing process at publications like The Onion and The New Yorker as “cyclical” and “mechanical” — she would wake up, watch the news, write a few jokes based on what she watched and then submit them for editing.

While the work was fun, Spyra said she often found it taxing. She said it hurt to see her jokes cut or edited, as it made her question her skills as a comic.

“You are a part of the machine, so you try and shovel stuff in there and do your best to have it be high quality, but you’re never entirely sure if it will be,” Spyra said. “There are times when things that you adore are cut, and it hurts because it’s your voice being cut.”

Spyra said the solution was to maintain confidence in what she was writing and keep on persevering. All it took was a “hit” —  a joke that wasn’t cut or heavily edited — to give her the confidence necessary to keep on writing, she added. Working in television for “The Late Show with Stephen Colbert” gave her more chances to get those “hits,” Spyra said, as each day was a chance to write a new monologue, a chance to have a new joke stay in the script.

After writing for Colbert for three years, Spyra decided to take on a new challenge: writing her first book, which she said was risky because it meant quitting her high-paying job with Colbert.

Spyra said writing the book challenged her to spend time thinking about world-building and character development, things she would not consider when writing comedy shorts or scripts. She said her book features characters who are “real people” with “real emotional baggage,” whose purpose is to do more than just make the reader laugh.

“It’s a struggle because it’s all about having the confidence and energy to just be like, ‘No, they’re (the readers) not bored, or they don’t need a joke,’” Spyra said. “You’re allowed to have this quieter, emotional moment.”

Her book has received critical acclaim and praise from established comedians including Colbert and Tina Fey. Spyra’s book is a collection of comedic short stories, balancing light-hearted humor with themes grounded in reality.

Jonah Zeiger, the assistant director of the EPICS office, concluded the event by thanking Spyra for speaking to the students.

“Thank you, Jen, for reaching out and staying in touch with your alma mater… (and) for sharing so many little gems of wisdom,” he said. “It’s really great to have you back with us.”

Event moderator and RTVF professor Eliza Bent also spoke about how much she enjoyed reading Spyra’s collection of short stories.

Throughout the event, Bent commended Spyra’s work ethic and writing skills, noting the ease with which Spyra struck a delicate balance between writing a lighthearted yet grounded novel.

“It’s so good, the stories are both wildly funny and also deeply unsettling in certain ways,” Bent said. “It’s a really exciting tone that (Spyra has) struck.”

— Profile: Students take their comedy Out of DaBox

Was That Really Scott Bakula Doing All That Singing?