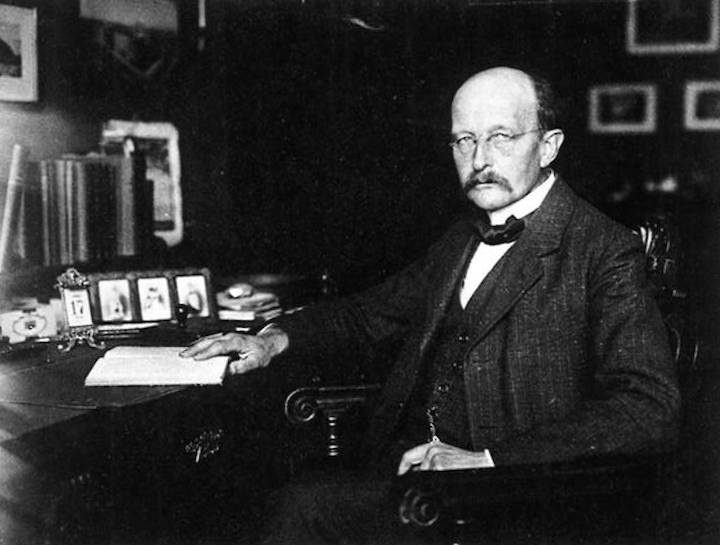 Quantum theory goes back to at least the early 20th century. German physicist Max Planck (above) won a related Nobel Prize in 1918. It could well be the future of computing. Light Rider is riding its coattails in Li-Fi, too, although it has yet to show a demo.
(Photo credit: Image of Max Planck in his study, circa 1919, uploaded by Hansmuller, photographer unknown, on Wikimedia Commons (https://bit.ly/2Far9iu).This media file is in the public domain in the United States. This applies to US works where the copyright has expired, often because its first publication occurred prior to January 1, 1925, and if not then due to lack of notice or renewal. See this page for further explanation: https://bit.ly/34st7U1.)

Lighting vendors are going all out to transform themselves into high-tech Internet and data communication players, so it seemed only a matter of time until one of the most intriguing concepts in information technology — quantum computing — worked its way onto the scene, as it did today with a Li-Fi startup.

Columbia, MD-based Light Rider Inc. announced that it plans to offer a Li-Fi system next year, delivering Internet in homes and offices via lightwaves rather than via the radio frequencies of Wi-Fi.

There’s nothing novel about that idea per se — vendors including Signify, pureLiFi,Oledcomm, and others have been slogging through a prolonged effort trying to get Li-Fi to take off.

But in a novel twist, Light Rider described itself as “a quantum Li-Fi company.” Emphasizing the network security aspect of its offerings, it noted that its Li-Fi technology “gives users instant quantum encryption right out of the box.”

A quick digression, and buzzword alert: Quantum computing is indeed a bona fide field in computer science that has been progressing recently and augurs astonishing increases in computational powers. Engineers are still years away from building true, fully-fledged quantum systems. The likes of Google, IBM, Microsoft, and others are on the case. Quantum computing draws on the precepts of quantum physics, in which things can be in two states or places at the same time. A “qbit” in quantum computing can be a zero or a one, for instance, with mind-boggling benefits for system efficacy.

So, to say you’re up to anything quantum is potentially good for your brand. Light Rider is indeed associating itself with “quantum.” But it also notes on the Indiegogo crowdfunding site where it is raising financing that it “has not yet produced a working demo.”

Light Rider claims it will offer two different forms of quantum network security. One, which it calls Light Rider LT, is software-based. A higher-end version, called Light Rider Quantum, uses a “quantum chip,” the company said, although it does not identify the chip provider.

The quantum encryption resides in the access points and dongles that are part of the Li-Fi network, according to Light Rider’s Indiegogo description. (Until laptop, phone, and gadget makers embed Li-Fi receivers, end users of any Li-Fi from any vendor have to attach dongles to those devices).

Some Li-Fi observers might wonder why a quantum layer of security is necessary, when one of Li-Fi’s inherent selling points is that it cannot be easily hacked from the outside — because hackers need access to the light in a room that is delivering the data.

Light Rider itself points out that light is hard to hack, and for that reason, Li-Fi is indeed a secure environment that the company wants to take to the next level.

“Our mission at Light Rider is to equip businesses, organizations, and individuals with powerful, quantum Li-Fi technology that will protect their data, as we strive to create products that are unhackable,” said CEO and founder Tony Lawrence.

The company plans to first offer the quantum encryption for non-Li-Fi systems this year, and to then offer Li-Fi in early 2021.

MARK HALPER is a contributing editor for LEDs Magazine, and an energy, technology, and business journalist (markhalper@aol.com).

For up-to-the-minute LED and SSL updates, why not follow us on Twitter? You’ll find curated content and commentary, as well as information on industry events, webcasts, and surveys on our LinkedIn Company Page and our Facebook page.