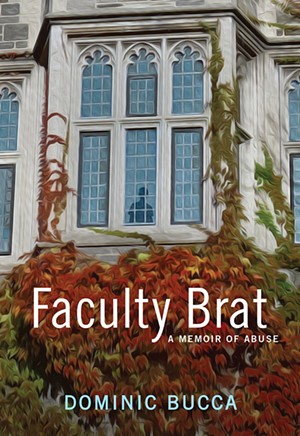 One of the most insidious things about childhood abuse is that it doesn’t end with childhood. Williston author Dominic Bucca portrays the aftermath with considerable power in Faculty Brat: A Memoir of Abuse.

The book offers two brief, graphic descriptions of Bucca’s sexual abuse at the hands of his stepfather, both before page 40. That particular type of abuse stopped with puberty, he writes. Yet, as Bucca details how those experiences reverberated through his adolescence and adulthood, reinforced by a pattern of intimidation and shaming, he makes it crystal clear why many victims take decades to seek redress.

At one point, the author notes the absurdity of Connecticut’s seven-year statute of limitations for criminal prosecution of child sexual abuse (lengthened in 2003, but still applicable to his case): “You try to imagine bringing charges against your stepfather at eighteen years old, still practically a faculty brat. It is unimaginable.”

Like the recent best-selling novel My Dark Vanessa, Faculty Brat explores how abuse can flourish within the ivied walls of private schools, with powerful financial interests keeping prosecution at bay. In this case, however, the victim is not a student but a “faculty brat,” his mother and stepfather both teachers at an unnamed school near Litchfield, Conn.

Bucca uses the title phrase to encapsulate the paradox of living in close proximity to wealth and privilege without enjoying their typical protections. When 12-year-old Dominic runs away to spend a day in the woods, the whole prep school turns out to find him, but no one seems to inquire what he was running from.

In Faculty Brat, which won the 2019 Iowa Prize for Literary Nonfiction, Bucca makes dexterous use of stylistic and storytelling devices to pull us into his factual narrative. His chapters are succinct and essayistic, each focused on a particular moment that serves as a turning point or encapsulates a period in the protagonist’s life. Bucca always ties his themes to vivid physical sensations: wetting the bed, the stink of his stepfather’s Jack Daniels, “[t]he funky smells of pot, sex, and hazelnut coffee” at his teenage girlfriend’s house.

But who is the person having all of these sensations? To foreground the theme of identity, Bucca heads each of the book’s three parts with one of the surnames he has used successively in his life: his stepfather’s, his father’s and his maternal grandfather’s. Present tense dominates throughout, but part I is told in third person (with the author referring to his past self as “the boy”); part II, in second person (“You’re twenty-three years old, newly married and working a new job”); and part III, at last, in the first person we expect from a memoir.

Thus Bucca weaves the link between abuse and the psychological phenomenon of dissociation into his narrative. Recalling his first experience of dissociating, he describes it as “a backhanded, unpleasant sort of meditation, [the boy’s] mind oddly blank, the fear so unimaginable that, all at once, it becomes unimagined.” In conditions of terror or stress, this blankness is “oddly welcome.”

If distanced third person is appropriate to the story of a frightened child who wants nothing more than to escape his life, the memoir’s second-person section forces readers to ask what they might have done in Bucca’s place. After noting that every family has its secrets, Bucca asks the reader pointedly: “What would happen if you exposed the secret? Would your family forgive your betrayal?”

At the age of 32, after a tough divorce, the author decided it was time to confront his stepfather about the abuse and tell his mother and half-sisters the full truth about his childhood. Local readers will cringe in empathy at a scene in which Bucca has that impossible conversation with one sister at a table in Winooski’s always-jam-packed Tiny Thai.

Less focused than the childhood narrative, the book’s second and third parts are somewhat less compelling. Rather than narrate the aftermath of his decision in chronological order, Bucca intersperses these developments with earlier tales of his life with his father’s large Irish Italian American family. These anecdotes lighten up the otherwise grim second half of the memoir — Bucca’s Grandmother Josephine, in particular, is a sly delight — even as they leave it a little scattered.

But perhaps that’s the point. For all the literary devices he uses, Bucca makes no attempt to force novelistic closure on his experiences, or even to imagine that possibility. His relationship with his mother, in particular, remains painfully fraught; toward the end, he asks, “How can I separate the pain of what happened to me from what happened to her?”

Such questions, the reader understands, may never be answered. The aftermath of abuse has no natural endpoint. Unlike the narrator of My Dark Vanessa, however, Bucca finds a route past the shame that his stepfather imposed on him, and he gains the perspective to put his experience in a broader societal context.

At one point, he pauses to consider the “unrecognized, devalued, practically discarded Americans” who have even less recourse to justice than he does, asking: “How many of them endured something similar, something worse, even, than what you’d lived through? How many did you pass by without a thought?”

[Webinar] Representations of Wealth Planning and Conflict in Film and Literature: What Can We Learn from Such Depictions? – October 7th, 3:30 pm – 4:30 pm CT | Robins Kaplan LLP