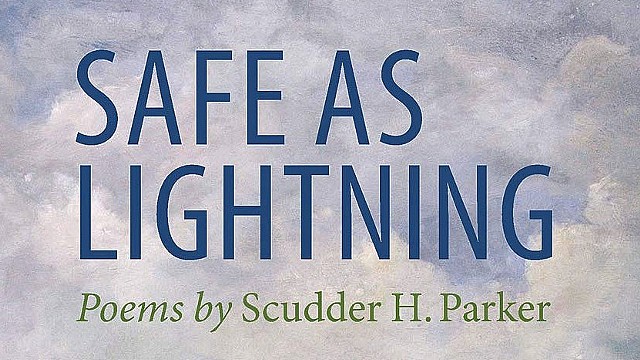 “There is nothing tidy about this volume,” Scudder Parker warns in the introduction to his poetry debut, Safe as Lightning. This is a humble beginning for a book that collects a rich lifetime’s worth of ruminations, memories and experiences living in rural Vermont: Parker’s family moved to North Danville when he was a child to try their hands at dairy farming.

Winner of the 1995 Ralph Nading Hill Jr. Vermont Writers’ Prize from Vermont Life, Parker has been writing throughout his life but more so in the last three years since shifting fully into retirement, according to his website. Prior to that, he served four terms in the Vermont Senate and spent decades as a Protestant minister and activist — a background that finds its way into some of his poems.

Mostly, though, Safe as Lightning is rooted in the pastoral tradition. The book is a veritable taxonomy of local flora and fauna that populate the mostly free-verse, personal-narrative poems with lists of birds, trees and flowers.

At the same time, there’s a refreshing, nonacademic quality to the poems’ content and execution. Open any cutting-edge, urban literary magazine, and you’d be hard-pressed to find realistic poetic depictions of small-town parades, “shitkicker” boots, milking or hunting — a way of life that Parker records and celebrates in an affectionate, contemplative and readable style.

The term “pastoral” has come to loosely refer to any celebration of the natural world, but it originated as an ancient lyric form specifically concerned with shepherds. These days, pastorals are rarely written by poets with actual experience working with livestock, so Parker’s perspective has a satisfying authenticity — not to mention that he served as a minister. (The word “pastor” has the same origin).

Parker is at his best while homing in on specific subjects of rural life, as in his three-part ode to the blade in a wood chipper, “Body of Work.” Part of it reads:

Night after night in my sleep,

I could hear the blade’s scream,

the whine and groan

of the engine in its rhythm

through the wood. I felt

again how I sat heavy with work,

unable to tell the difference

between satisfaction and exhaustion,

my mind empty with gloating,

my hands resting in work’s shape.

Another poem that stands out is “First Love,” which depicts two teenage boys exploring each other’s bodies, albeit chastely: “Your gentle investigation of my body / sweetened me; was the first time I let myself / feel cherished.”

The best lines in Safe as Lightning come with sudden flashes of lyricism and darkness: “anger shows up at my doorstep / like an orphan.” Many of these lines are musical, and occasionally Parker works in form, including an excellent villanelle (“No Doubt”), the challenging rhyming structure that Dylan Thomas employed for “Do not go gentle into that good night.”

Parker’s publisher, Rootstock Publishing, is a hybrid partnership company, meaning authors pay the press to print their work; the fee is $3,900 for inclusion in their poetry series, curated by Montpelier poet Samantha Kolber. But with gushing blurbs from U.S. Sen. Patrick Leahy, former governor Madeleine Kunin and two former Vermont poet laureates, it may have been a sound decision for Parker, since hybrid publishers compensate authors at a significantly higher rate than traditional presses.

The language in Safe as Lightning is crystal clear; no cryptic metaphors to unravel, no lyrical acrobatics or contortions. But nothing in Parker’s bucolic Vermont seems to be in danger or out of place: no dairies going out of business, no opioid epidemic, no undocumented immigrants, no global warming threatening the maple industry. The final lines of the book declare:

We sit in autumn sun

as the storm comes on,

and weather, grief, and love

This sentiment is comfortingly universal, but it’s hard not to read it as resignation in the face of global tumult and eco-collapse. Safe as Lightning, though, is also an authentic, unpretentious expression of rural Vermont, brimming with gratitude and wonder, warmth and optimism. Many readers will likely recognize themselves and find solace in its pages (or at least nostalgia for simpler times), but the natural world and the people who live there might need more than praise.