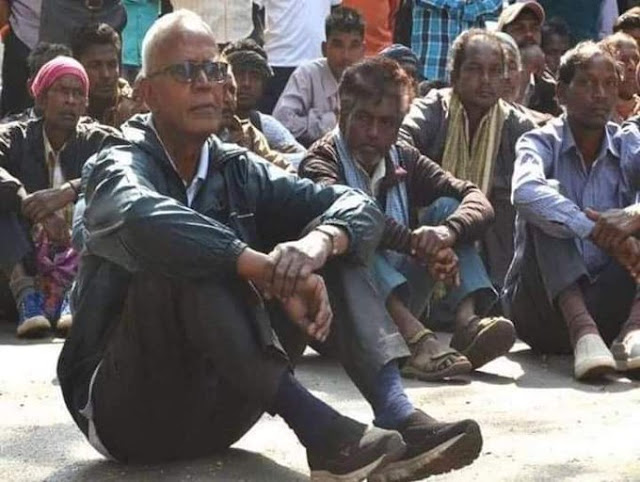 On 15 January 2021, 83-year old Jesuit Fr Stan Swamy, completes one hundred days since he was taken into custody from his residence in Ranchi, by the National Intelligence Agency (NIA) on October 8, 2020; he has since been incarcerated in the Taloja jail, near Mumbai. Fr Stan has been charged under the Unlawful Activities Prevention Act (UAPA) for his alleged involvement in the Bhima Koregaon violence which took place on 1 January 2018 and for participating in the Elgar Parishad, the previous day.
The truth is that Fr Stan has never been anywhere near Bhima Koregaon and did not participate in the Elgar parishad. Fifteen others (all human rights defenders) have also been incarcerated in this fabricated case; some of them are languishing in jail for more than two years now. On the other hand, the actual perpetrators of the violence, who were originally named, have gone scot- free because of their close connections with the regime that rule the nation today.
The UAPA needs to be withdrawn immediately and unconditionally. On November 25 (the eve of India’s ‘Constitution Day’) Justice AP Shah, the former Chairman of the Law Commission in an interview to Karan Thapar for “The Wire” (the interview went viral), referred to the Supreme Court April 2019 ruling in the Zahoor Ahmad Shah Watali case which says “that an accused must remain in custody throughout the period of trial” if he or she is charged under UAPA and that “courts must presume every allegation made in the FIR to be correct and the burden rests on the accused to disprove the allegations”; this he asserted is a “complete negation of Article 21 which is the right to personal liberty.”
Justice Shah said that bail is the rule and jail the exception; now, it seems, the Supreme Court has made jail the rule and bail the exception. He added “it seems we are living in a state of undeclared emergency”. He went on to add that today “courts lack humanity and fundamental concern for the human rights of the accused”. In this connection he cited the example of Varavara Rao and Stan Swamy. He was particularly astounded by the decision of the NIA Court to require two weeks to decide whether Stan Swamy can be permitted a straw or sipper. Very strong statements indeed from one of the best-known jurists of the country.
To put matters in perspective, on November 26, Fr Stan Swamy’s plea (by his lawyers) at a Special Court for a straw and a sipper cup which he needed as a Parkinson’s Disease patient, was once again put-on hold till December 4. The National Investigation (NIA) filed a reply on the petition of Fr Swamy seeking the return of the straw and sipper confiscated during his arrest saying that the agency did not take them.

Fr Stan finally received the straw sipper; but once again on December 14 his bail application was opposed by the NIA. On January 12, 2021, another hearing began with advocates on both sides presenting their arguments; these are expected to continue for some more days; whether Fr Stan will be released on bail or not at this juncture, is anybody’s guess!
Besides his age, Fr Stan is also feeble with physical infirmities. He however, does not complain; he retains his deep spirituality and positivity. His communications with the outside world are regulated and monitored; each of them is in fact very motivating. Just before Christmas he wrote a very touching poem, an excerpt from it goes thus:
“Prison life, a great leveller
Inside the daunting prison gates
All belongings taken away
But for the bare essentials
‘You’ comes first
‘I’ comes after
‘We’ is the air one breathes
Nothing is mine
Nothing is yours
Everything is ours
No leftover food thrown away
All shared with the birds of the air!”

On January 15, Mary Lawlor, UN special rapporteur on the situation of human rights defenders, will be speaking at PUCL’s programme on ‘brutal face of the Indian state’

In the meantime, thousands of citizens from all walks of life and from everywhere have strongly condemned the illegal arrest of Fr Stan and demanded his immediate release. In a letter (December 18, 2020) addressed to the Prime Minister, more than twenty European Parliamentarians say:
“The undersigned, Members of the European Parliament (MEP), would like to express our deep concern about the detention and imprisonment of 16 human rights defenders in connection with the Bhima Koregoan case under the Unlawful Activities Prevention Act (UAPA) in relation to the incident that took place in India in December 2017. We would like to draw particular notice to the Jesuit priest Fr. Stan Swamy, arrested on October 8, 2020 in Ranchi…. The work he has been engaged in, has always been within the framework of the Indian Constitution and of democratic processes Fr. Stan Swamy is 83 years old and a sufferer of Parkinson’s Disease…
“He is thus in a vulnerable physical state and especially because of his advanced age has been under medical observation and special diet. His captivity has in no doubt impaired his health for the last month and a hall. We are deeply concerned about his health and well-being in the midst of the COVID-19 pandemic, and we urge you to release him immediately on humanitarian grounds.” 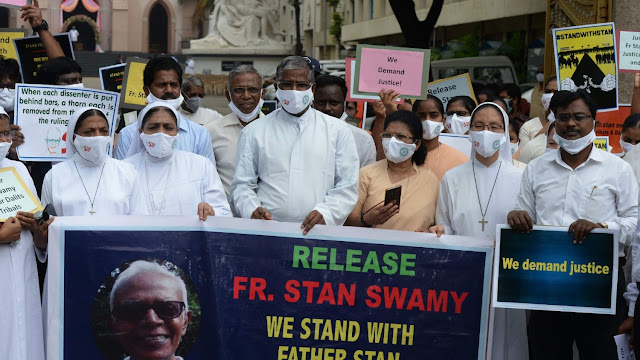 Recently a high-level human rights team of the UN which included the Working Group on Arbitrary Detention, the Special Rapporteur on the situation of human rights defenders and the Special Rapporteur on minority issues, have made public a letter they had written to the Government of India expressing their concern over the “alleged arbitrary detention of human rights defender Stan Swamy”.
The letter which was sent to the Indian Government on November 3, 2020, was made public, because the Government had not replied to them within the mandated period of sixty days. The letter asked the Government to “provide information as to the factual and legal basis for the arrest of Mr Swamy on October 8, 2020” and also asked for information on the measures undertaken to “ensure that minority human rights defenders, and in particular human rights defenders working for the protection and promotion of the rights of persons belonging to minorities or scheduled castes and tribes in India, are able to carry out their legitimate work in a safe and enabling environment, without the fear of prosecution, intimidation, harassment and violence, in full respect of their civil and political rights, including in the context of the Covid-19 pandemic.”
Meanwhile an online petition addressed to the United Nations High Commissioner for Human Rights (OHCHR) asking for the release of Fr Stan has generated thousands of signatures from all over the world! On January 15, the 100th day of Fr Stan’s imprisonment, several online programmes are being planned; one of them is being organized by the Peoples Union for Civil Liberties (PUCL) and the Jesuits who are campaigning for the release of Fr Stan, together with several other major human rights networks and platforms in the country; the programme will focus on ‘the brutal face of the Indian State!’ Mary Lawlor, the UN Special Rapporteur on the situation of human rights defenders, will be speaking at the programme!
Prison is no palace! One thing however, is clear: that in the face of growing human rights violations and the systematic destruction of democratic principles, thanks to Fr Stan and the others languishing in jail, there is today a greater awakening among “we the people of India!” The clarion call then is to act together, expeditiously and with a sense of purpose – before all is lost for all and forever!
—
*Human right, reconciliation and peace activist/writer