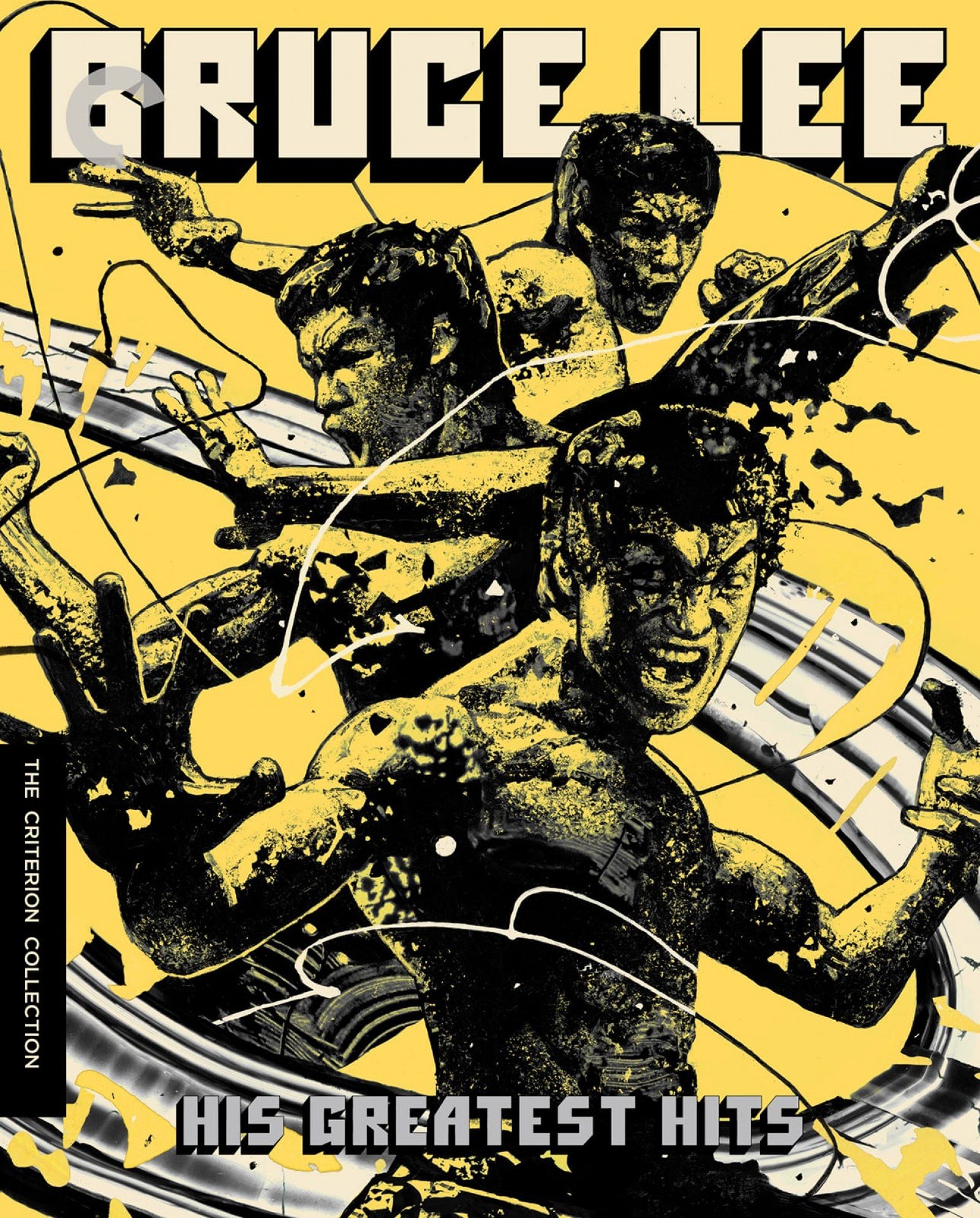 The five films spotlighted in the Criterion Collection’s Bruce Lee: His Greatest Hits cumulatively offer a pseudo-autobiographical narrative that parallels the general beats of Lee’s life, from his rising status as a film star to his death at 32 as he was on the cusp of becoming an icon. The films abound in patterns, especially structural bifurcations, that reflect how Lee had to prove himself first to the Hong Kong film industry and later to Hollywood. Adaptation is the theme of his films and the guiding philosophy of his own school of martial arts.

As this set’s supplements make clear, Lee returned to Hong Kong after trying to break through in American cinema. His adventures in America, most prominently in the ‘60s, yielded a sidekick role as Kato in the short-lived TV show The Green Hornet. But Hong Kong viewers saw him as the hero of the series, and this unexpected love from his countrymen led Lee to partner with the studio Golden Harvest, a rival of Shaw Brothers Studio that produced or co-produced all of the films in this set, from 1971’s The Big Boss to 1978’s Game of Death. In The Big Boss, Lee doesn’t assume prominence until the second half of the narrative, as producer Raymond Chow was still deciding if the actor had the gravity to command an entire film. In Game of Death, Lee haunts a production that was posthumously, tastelessly cobbled together from footage he had shot himself before leaving to shoot 1973’s seminal Enter the Dragon. Across the spectrum of this set, Lee grows quickly, far too quickly, from ingénue to pro to specter.

The Big Boss, written and directed by Lo Wei, shrewdly builds anticipation for what Lee can do in his first major outing, setting a pattern that would be followed by his other vehicles. Always pointedly the outsider, Lee’s characters arrive in another country either for the first time or after a long absence, gradually acclimating themselves to a society that’s been perverted by corruption. Remarkably, only one of these films, Game of Death, is partially set in Hong Kong. The Big Boss finds Lee in Thailand; 1972’s Fist of Fury, also written and directed by Lo Wei, is set in early-20th-century Shanghai; 1973’s The Way of the Dragon, written and directed by Lee, takes place in Rome; and Enter the Dragon is set on a fictional island deliberately meant to evoke the hideout of Dr. No. These films continually wrestle with dislocation, cannily reflecting the estrangement of Hong Kong, a city that’s been occupied by multiple foreign parties, and serving to humble Lee’s astonishing charisma and skill. In these films, Lee straddles an empathetically powerful line between underdog and master.

There’s a sense in these films, as in Lee’s life, of a man having to prove himself over and over again, and then suddenly dying upon the achievement of total acceptance. Portions of this idea are intentionally achieved, via formulaic plots, while other elements seep in from the reality of the films’ productions. After arising as a star in the second half of The Big Boss, Fist of Fury, and The Way of the Dragon, Enter the Dragon finds Lee once again sharing the spotlight with other stars, John Saxon and Jim Kelly. Internationally, Enter the Dragon is easily the most famous film in this set, and it remains a feverish and exciting blend of espionage, sleaze, horror, and martial arts hokum, but it’s a disappointment to see Lee demoted in stardom after The Way of the Dragon, especially if one is binge-watching these films.

The Way of the Dragon, though, cannot compete with Enter the Dragon in conventional formal terms. Lee’s direction of the action scenes in the former is superb, and he has a phenomenal understanding of the graphic power of his own compact, sculpted, seemingly fatless body. These talents are especially evident in a sequence in which Lee and former pupil Chuck Norris battle in a colosseum, though his inexperience as a filmmaker is revealed in the film’s long buildup to the set pieces, and in the strange and not-entirely-successful blend of broad comedy (in the first half) with violence (in the second) as Lee’s character evolves from well-meaning tourist to, well, Bruce Lee. This is another bifurcation, of course, though Lo Wei utilizes these sorts of devices more skillfully in The Big Boss and Fist of Fury, Lee’s best film.

The Big Boss and Fist of Fury merge fight sequences, comedy, historical myths, and gothic horror with aplomb; they’re not only kinetic but aesthetically ravishing to behold. Most importantly, they capture Lee’s profound soulfulness—his awareness of his characters’ need to prove themselves as an extension of his own ambition. Lee is often at his most moving while at his most terrifying, especially when his characters finally lose control, summoning their rage in a galvanic burst of violence. It’s a rage that’s kept in check, for most of these films’ narratives, with signature moves—from his animal sounds to the licking of his own blood—that are both contemptuous and self-compensating.

It’s a bizarre irony that Game of Death, mostly directed by Robert Clouse, most potently underscore’s Lee’s gifts via his absence. Cobbled together five years after Lee’s death, it mixes in a few minutes’ worth of footage that Lee shot for a future project before he left to work on Clouse’s Enter the Dragon. To be clear, for the majority of the film’s 101 minutes, Lee is represented by stunt doubles and stock footage, and even, in one particularly ludicrous moment, a cardboard cutout of his face. The film offers the spectacle, then, of a Bruce Lee film without Bruce Lee, and his galling absence speaks to the magnificence of his presence and talent. When we finally see Lee, he’s ascending a stairway to a fight, in a gesture that in this context suggests resurrection. This idea is very intentionally evoked, as the film unforgivably utilizes footage of Lee’s real funeral as part of a “fake death” scenario. The garishness of Game of Death suddenly gives way to the real McCoy, who just as promptly vanishes. This is an extreme version of the bifurcation of this series, as Lee, once marginalized, is now yoked from death, via crassness, as an elusive star who’s truly beyond life. In short, a myth.

Criterion offers 4K digital restorations of most of these films, though the special edition of Enter the Dragon was undertaken in 2K. Though there some blemishes, most notable in the awkward doubling work in Game of Death, these images are often gorgeous, with lush, vibrant color schemes that recall those of Hammer horror films. In the days of VHS and TV showings, these movies often seemed too bright, and so Criterion’s great accomplishment here is to restore their sense of robust, suggestive darkness, which now balances well with the light and assorted other hues. (These films have a vivid, primary-based color scheme.) Skin textures, which could seem overexposed or waxy in the old days, are also resoundingly lifelike here. Depending on the film, a variety of monaural and alternate soundtracks are available, including English dubbings, and they boast remarkably dimensional soundscapes, rendering the action scenes more kinetic and cathartic than ever before; the swift, hyperbolically pronounced kicks and punches suggest the inner furies of the characters writ physical. And the voices, even the dubbings, have also been rendered with exacting care.

This supplements package is head-spinning, offering a bonanza of information that could take a cinephile a month to fully unpack. Firstly, there are three more films included in this set: the 103-minute special edition of Enter the Dragon that’s been in circulation for some time; Game of Death II, an even more desperate and ghoulish enterprise than its predecessor (though it has a few outstanding action scenes); and a newly remixed 34-minute version of the original Game of Death that’s made up strictly of material written and directed by Bruce Lee. This Game of Death Redux is a masterpiece of action and emotion, as Lee’s character ascends three floors of a pagoda, encountering enemies with differing fighting styles and having to adjust his tactics accordingly—a major tenant of Lee’s own martial arts. The short also climaxes with a legendary fight with Kareem Abdul-Jabbar, which the men invest with a pathos that’s mostly missing from the still-awesome encounter in the feature-length film. If one could only have one supplement from this set, it would be Game of Death Redux.

Most of these featurettes are still superb. There’s an illuminating new interview with producer Andre Morgan, an American who worked with Raymond Chow at Golden Harvest. He discusses the working relationship between himself, Chow, and Lee, especially as they sought to tap the American market. Dozens of other interviews and extras complement Morgan’s anecdotes, recounting Lee’s attempts to become a star in America in the ‘60s, including the devoted following he cultivated as a martial artist teacher, with students such as Steve McQueen and James Coburn. The politics of the various films are examined at length, especially in the audio commentaries originally recorded at Shout! Factory by Mike Leeder, who speaks of, say, the Chinese-Japanese tensions that drive Fist of Fury as well as of the general cultural sensibilities of Hong Kong. Dozens of archive documentaries offer a course in how Lee’s legend has been presented at different times, including footage of Lee’s elaborate Hong Kong funeral, in which one can see Lee’s widow, Linda Lee Caldwell, and their son, Brandon, who would also grow up to die a bizarre death right as stardom appeared to be approaching. (Even stranger: Brandon’s death, caused by a gun shot from a faulty blank on the set of The Crow, uncomfortably echoes the attempted murder of a Lee stand-in in Game of Death.)

Lee’s philosophies are articulated at length here, most succinctly and directly by “Bruce Lee: His Own Words,” which offers an assemblage of interviews with the legend. “Brucesploitation,” the practice of hiring Lee lookalikes to star in imitation martial arts films in an attempt to capitalize on his death, is given an overview by author Grady Hendrix, and the art of English dubbing is also explored. There are many making-of documentaries, including Blood & Steel, which covers the making of Enter the Dragon. For a quick one-stop shop, the 10-minute interviews with Lee biographer Matthew Polly included on each film serves as a wonderful primer on the social contexts that inspired each respective production. Various promo materials round out this indispensably mammoth collection, and a liner essay by critic Jeff Chang does an especially fine job of outlining how Lee fought to keep his integrity on Enter the Dragon, and how a shifting America, in the wake of Vietnam, embraced martial arts films.

Criterion’s Bruce Lee set is as wonderful as you’ve heard, boasting definitive restorations and enough supplements for at least two semesters’ worth of martial arts semiotics.

We’re committed to keeping our content free and accessible—meaning no paywalls or subscription fees—so if you like what we do, consider becoming a SLANT patron, or making a PayPal donation.

All of the romantic Netflix shows based on books (2021)