by admin
in Literary Agents
0

1998 was promising to be a banner year for Joy Zinoman and her Studio Theatre.  Already settled into a stunning new building which opened the previous year that shone with what Washington Post architectural critic Benjamin Forgey called an “inner glow,” the company was winning kudos for its positive impact on a long-derelict neighborhood, and for its performances on stage. 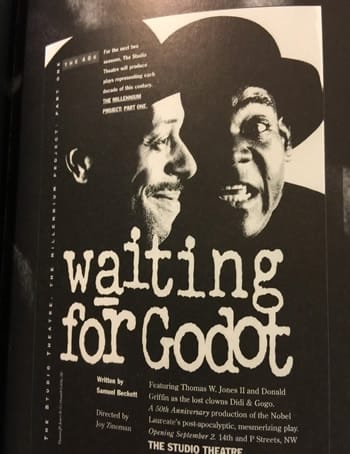 The new building, in actuality, was a renovated auto dealership that had sat vacant for too long at the corner of 14th and P Streets NW.  Urban planners praised Zinoman for taking a chance on a neighborhood that had been damaged by civil unrest in the late 1960s; and had languished ever since.

Looking back, Studio’s arrival marked the beginning of gentrification which accelerated a handful of years later with the opening of a Whole Foods nearby.  The new theater contained several rehearsal and performances spaces of varying size which seemed especially well-suited for a company founded in 1978 that had grown out of a successful acting conservatory sustaining itself at a number of rented venues.

Zinoman and Studio became a cornerstone to a wave of new theater companies springing to life around the metropolitan region in the 1970s and 1980s, including Michael Kahn and Shakespeare Theatre, Howard Shalwitz with Roger Brady and Woolly Mammoth Theatre, and Eric Schaeffer and Signature Theatre.  Like Studio, all were in the process of maturing into significant companies that were reshaping Washington’s once doughty theatrical scene.  Zinoman remained the company’s artistic director until her retirement in 2010.

Studio had cultivated a dedicated audience captivated by the quality of what was transpiring on stage.  In September 1998, Studio started a new season in its new home with Samuel Beckett’s Waiting for Godot under Zinoman’s direction.  Critics joined audiences in their praise for the production.  Writing in the Washington Post, Lloyd Rose recorded that “this is not only the funniest production I’ve seen, it’s the most theatrical, exploring the waiters’ existential predicament in terms of the possibilities and limitations of performance.”

Peter Marks was even more rapturous in his coverage for The New York Times; both about Zinoman’s direction, and Thomas W. Jones II’s and Donald Griffin’s performances as Vladimir and Estragon.  For Marks, Zinoman’s “liberty-taking and immensely enjoyable performance” was infused with “an up-to-the-minute urban sensibility.  The play begins with a few jazzy notes on a saxophone; the black actors who play the leads – the supporting roles of Pozzo and Lucky are played by whites – perform bits of hip-hop and, in the kinds of improvisations that would have driven Beckett up the wall, embellish the text with caustic asides, resort to black slang and even flirt and banter with the audience.”  Sarah Kaufman, again in the Washington Post, paid particular attention to the seamless connectivity between Jones and Griffin. Audiences were equally rapturous, prompting Studio to extend the run throughout the autumn.

Marks’s review in the Times caught the attention of Georges Borchardt, Inc., the literary agents for Beckett’s estate.  Noting that the review suggested Studio was taking illegitimate liberties with the script, Borchardt’s representatives wanted Studio to shut the production down, going so far as to demand that Alleen Hussung of Samuel French, who issued Studio the rights to Godot, send a cease-and-desist letter.  Zinoman doggedly kept the production going as the company and various literary agencies descended into legal bickering. Zinoman confided in the Post that she believed Borchardt to be intimidating and bullying.

Zinoman maintained throughout that Beckett’s stage directions had required the characters to “turn toward the auditorium” and even ad-lib at various moments.  By this time, productions of Godot had become so codified that such instructions had disappeared from consciousness.  What might have been a contest between creative and legalistic interpretation, however, took on a more malevolent dimension.  Borchardt’s agents latched on to some of the terms used by Marks –such as “hip,” “jazzy” “hip-hop,” and, “black slang.”  Agents also complained in phone calls with Serge Seiden, Zinoman’s director of production, that the “injection of race” in the production was among its most “troubling” aspects.

As Thomas Jones confided to Jane Horowitz of The Washington Post, complaints about his and Griffin’s use of black vaudeville traditions to shape their characters particularly seemed to rankle. At best, Jones was convinced that racial insensitivity prompted Borchardt’s negotiators to try to close down the production.

Studio was hardly alone in feeling the sting of Beckett’s literary protectors.  Other productions in the US and in the United Kingdom — where London-based literary agency Curtis Brown handled production rights — similarly came under fire at various points. For their part, Studio felt that Borchardt rather than Studio was “playing the race card.”

Meanwhile, Zinoman discovered that a distant relative of Samuel Beckett’s by marriage worked at the State Department with Zinoman’s diplomat husband.  Eventually, she reached the playwright’s executor and nephew, Edward Beckett, who intervened.  Borchardt extended rights to complete the extended run, denying any racial overtones in its criticisms. Beckett and his estate are notorious for what they see as safeguarding the text.  In this instance, however, a racial subtext added fuel to everyone’s fire.

In what may have been the final word on the episode, South African playwright Athol Fugard recounted to the Washington Post his own positive experience with Beckett himself when producing Godot with an all-Black cast in the 1970s.  “Nothing would have been more abhorrent to Sam Beckett.  I know that very, very specifically.”  Instead, “if all of this is now the result of the literary estate deciding that this is what Sam would have liked, then they are very conceited and very silly, because his work doesn’t need that sort of protection.”

Update:  Joy Zinoman is the founder of the Studio Acting Conservatory, now located in Columbia Heights.

How to Find a Literary Agent With Reedsy’s Help

Immediate Secrets For Example Of Literary Analysis Across The Usa