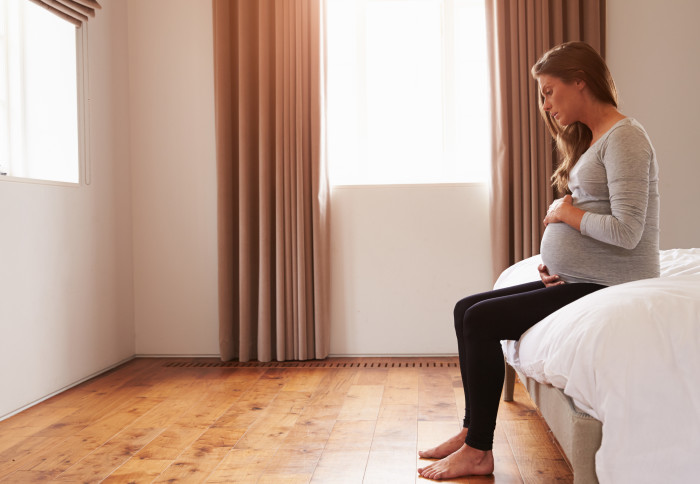 Severe morning sickness increases the risk of depression both during and after pregnancy, new research has found.

Severe morning sickness, known as hyperemesis gravidarum (HG), is a debilitating condition that affects around 1-2 per cent of pregnant women in the UK. Far more serious than ‘normal’ morning sickness, it is one of the most common reasons for hospitalisation during pregnancy and can continue right up until birth. Women can be bed-bound for weeks on end, suffer dehydration and weight loss and are often unable to work or care for other children they have.

Dr Nicola Mitchell-Jones, specialist registrar in obstetrics and gynaecology and lead author of the study, believes the psychological impact of the condition is not taken seriously enough by both healthcare professionals and the wider public.

“Our study shows that women with HG are around eight times more likely to suffer antenatal depression and four times more likely to have postnatal depression,” she says. “Some women in the study even had thoughts of self-harm whilst suffering HG. These figures are shocking and should be reflected in the treatment women receive. We need to do much more than simply treat the physical symptoms of HG; assessment for mental health support should also be routine for any woman with the condition.”

Half were recruited on admission to hospital with symptoms of HG. A similar size control group, without significant nausea or vomiting, were recruited through a midwifery-led antenatal clinic. None of the study participants had been treated for mental health conditions in the last year. The women were assessed for their psychological wellbeing in the first trimester of pregnancy and six weeks after the birth.

Although the study found no direct link between HG and maternal-infant bonding, other research has shown that depression can have a negative effect on this bond. Sadly, eight women with HG recruited to the study terminated their pregnancies, despite originally expressing a desire to keep the baby.

“Although we can’t say that HG was the main reason for those decisions, it may certainly have played a role which is heart-breaking,” said Dr Mitchell-Jones, who herself suffered from HG during her first pregnancy in 2018.

“I was in and out of hospital, spent nearly six months in bed – but I was lucky enough to have a supportive employer and family,” she recalled. “Many women can’t afford that amount of time off work or are stay-at-home mums with young children to care for. Too often their partners, relatives or work colleagues are not providing the support they need because they fail to understand the severity of what these women are going through. We need to educate them, as well as healthcare professionals.”

Dr Mitchell-Jones hopes that her findings can help to improve understanding of HG and change clinical guidelines on how women with the condition are treated, to include a psychological screening and referral to specialist mental health where required.

Tanya Woods, Operations Director of restaurant business in Hammersmith, has a daughter called Tallulah age 3 and took part in the trial.

Having suffered two miscarriages in 18 months after over a decade of problems relating to endometriosis, Tanya and her husband Stephen had planned to undergo IVF once their wedding had taken place in August 2016.

However, Tanya discovered she was six weeks pregnant on the 14 August 2016 – a week before their wedding. They were overjoyed, though anxious.

Their IVF consultant immediately referred Tanya to the Early Pregnancy Unit at her local Chelsea and Westminster hospital, so that they could keep a close eye on her. She was prescribed hormones to support the pregnancy.

After their wedding, Tanya and Stephen went on a mini honeymoon to Cornwall for a few days. They set off on a Tuesday in August, and by the Saturday, now 7 weeks pregnant, she already felt very unwell.

“I was retching at smells, and had what I first thought was a feeling of enormous hunger. I felt that if I didn’t eat I would pass out. But it was actually nausea and when I did try and eat, I vomited. That was the beginning of it, and it came on incredibly quickly.”

The couple returned on the Monday and Tanya went back to work, but the nausea and vomiting were growing more intense and realising that this wasn’t ‘normal morning sickness’ on the Wednesday she consulted her GP.

“I really liked and respected my GP but I don’t think he understood just how bad I was feeling. He knew about the miscarriages, so advised against taking any drugs so as not to interfere with the pregnancy in any way, and tried to remain positive, saying that the nausea was a good sign that the pregnancy was viable.”

“I was feeling more and more wretched every day and it was becoming near impossible to focus at work. Most days I couldn’t get out of bed. At its worst, the nausea would rage if I moved, if I spoke, if I tried to sip water, even if I altered my breathing pattern. remember at the time thinking that it was a worse feeling than any pain I’ve ever felt, it was really crippling.”

The following week the couple returned to the Early Pregnancy Unit for a follow up appointment, where Tanya was seen by Dr Nicola Mitchell-Jones, an expert in HG. Dr Mitchell-Jones saw how dehydrated Tanya was, took her into a treatment room and put her on an IV drip there and then.

“I feel so fortunate that I was seen by Nicola that day. It felt that finally someone understood. I was on the drip for about 2 hours and it made a difference almost immediately. So much so that on leaving the hospital, I was able for the first time in a few days to actually take a few bites of a sandwich.”

Dr Mitchell-Jones arranged for Tanya to be given IV fluids every day for 2 weeks at the Ambulatory Unit in the hospital. With the blessing of her employer, Tanya took time off work to have her daily IV fluids treatment, then rested as much as possible at home.

“I was filled with the fear of losing another baby, but when the HG was at its worst, thoughts crept in about whether I could continue with this pregnancy if it was going to be like this for the whole nine months.

“I would feel really depressed to see other pregnant women who were blooming, finding my own pregnancy, by contrast, unenjoyable, stressful, and terribly emotional. I started to think that maybe I just not meant to have children. I felt really isolated. Stephen tried so hard to help and support me, but it was a very difficult time for him too.”

Tanya was put on the anti-sickness medication Ondansetron and her nausea and vomiting lifted within a few days, to the point where she could hold down food and liquid – but only certain foods.

“I couldn’t believe that a drug that would ease the nausea and vomiting was so readily available. It wasn’t perfect, but it was so much better. I was able to go back to work but couldn’t really concentrate on anything except the pregnancy – it occupied every waking moment.

“I lived off ramen and Rice Crispies for several weeks as they were the only things I could stomach! It was strange, there were some foods that still made me retch if I just thought about them – broccoli – I love broccoli, but the thought of it would make me feel sick.”

By Christmas 2016, Tanya finally started to feel normal again, so much so that she and Stephen were able to take a holiday just before Christmas. Their beautiful, longed-for daughter, Tallulah, was born on 04 May 2017.

“I only suffered HG only for a few weeks, so I honestly cannot fathom how women who have these symptoms throughout their pregnancy could cope. I could never have imagined how bad HG could be if I’d not experienced it myself.

“We are thrilled to have our daughter after the problems we had trying to get pregnant and stay pregnant. But as a result of the struggles to get pregnant, my experience of being pregnant – particularly the HG, combined with us not really wanting to face the sleepless nights again now, we have decided we probably won’t have any more children.  Now that Tallulah is here, we’re happy just focusing on her.”

See the press release of this article

New book details how to be successful in the police academy