Sight Magazine – On the Screen: ‘My Salinger Year’ a literary pleasure

In a Word: Intelligent 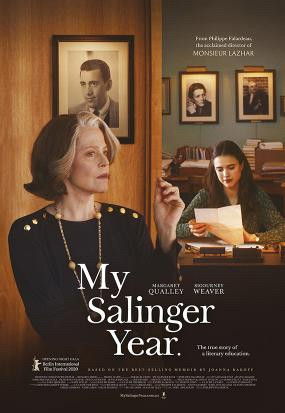 Adapted from the best-selling book of the same name, this small-scale story follows idealistic 20-something Joanna Rakoff (played by Margaret Qualley) as she arrives in the Big Apple to make it as a poet and, in need of funds to support herself, finds herself working as an assistant to the no-nonsense literary agent, Margaret (Sigourney Weaver).

Margaret runs a notoriously technophobic office – while the film is set in the mid-1990s, Joanna is forced to use a typewriter and a dictophone. Margaret’s biggest client is also a blast from the past – the reclusive writer JD Salinger, best known for his 1951 work, The Catcher in the Rye. Joanna is given the task of reading and then answering his mail using pre-prepared form letters before shredding the received correspondance (Salinger has made it clear he doesn’t want to receive it). But it’s not long before, against the strict instructions given to her, she finds herself drawn into the stories of those who are writing to Salinger.

My Salinger Year is all about the characters and Qualley and Weaver are both superb in their roles, ably supported by a case which includes Colm Feore (who plays Margaret’s partner, Daniel), Bryan F O’Byrne (who plays the long-suffering lawyer Hugh), and, Douglas Booth (who plays Joanna’s rather self-centred boyfriend, Don). The film is replete with literary references and those who love books will love being taken into this world, one usually kept behind closed doors.

The relationship between Margaret and Joanna is a central theme of the story, of course, but it’s not all consuming – this is not The Devil Wears Prada – and there’s some room left for other, intertwining narratives. Writer/director Philippe Falardeau does a terrific job in recreating the lost world which Margaret inhabits and, through deft handling of the story, manages to keep the audience hooked despite what could be dry subject matter.

There’s some humour, lots of pathos and just enough mystery to make this an enjoyable indulgence. Well worth catching at the cinema if you can (and, of course, there’s many places where that’s still not possible) or putting on your list for a later time.