‘The Believer’ and BMI find ways to connect with lockdown audiences, through literature and beyond

Reading is a solitary activity naturally suited to pandemic-related lockdowns. Nothing’s more socially distanced (yet emotionally connected) than tearing through the pages of a book or magazine while alone on the couch. But what if your job is to create and foster a literary community? During an outbreak, no less? Even in the best of times, writers and readers can be introverts. 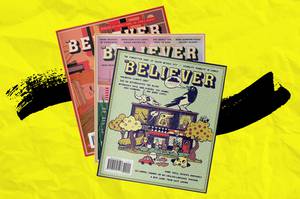 Las Vegas’ own literary powerhouses—The Believer magazine and its partner, UNLV’s Black Mountain Institute—are demonstrating they’re up to the task. This year’s Believer Fest may have been canceled, but the two entities have stayed busy, churning out creative connections.

Here’s what they’ve been up to, and how you can play along.

This year’s fiction pick for Nevada Humanities’ statewide book club, Nevada Reads, is Severance by Ling Ma. This book is so timely, we can barely believe it was chosen before the pandemic. It’s serious literature … set amid a zombie apocalypse brought on by a virus.

Episodes feature a portion of the audio book followed by a discussion, and guests include authors, scholars, artists, public health experts and other thinkers like Kristen Arnett, Christopher Coake, Brent Holmes, Lance Smith, Lisa Ko, Erica Vital-Lazare, Claytee White and, of course, the author herself, Ma.

Produced in partnership between BMI and Nevada Humanities, the book club airs at 7 p.m. Sundays on KUNV 91.5 FM and streams at kunv.org/listen. It’s then rebroadcast at 11 a.m. Mondays on KUNV 91.5 HD-2 and at therebelhd2.com/live. The 14-week show runs through October 4. If you’ve missed episodes, don’t worry; it will eventually become a podcast.

Comics can be literature, too, and during the pandemic, The Believer has been hosting weekly online comic-drawing workshops. They’ve attracted locals, along with folks from around the globe, and even if you don’t consider yourself to be an artist, it’s a fun way to connect, be creative and relieve stress.

Workshops take place at 4 p.m. on Fridays. RSVP at blackmountaininstitute.org/live, and explore the archive at believermag.com/tag/comics-workshops.

The Believer magazine offers you this podcast on loneliness and the human condition, produced by Bianca Giaever, whose work has aired on This American Life and Radiolab. Episode topics include reflections on boredom, conversations with a crossing guard and meditations on nonfiction filmmaking. Edited by Hayden Bennett, deputy editor for The Believer. Believermag.com/constellation-prize.

If you’re feeling disconnected during the pandemic—and who isn’t, really?—this box set of 30 postcards can be a neat way to reconnect. Postcards feature art, poetry and quotes from The Believer magazine. $15, believermag.com/shop.

We immortalize our memories with thousands of photos, but we rarely think to save our voices. The Believer’s Voice Mail Project seeks to create a “sonic history.” Leave a voice message sharing the story of an unforgettable voicemail, then listen to messages left by others. Thevoicemailproject.com.

Autumn is generally prime time for the arts, and this year will be no exception … except that it’ll take place online. The Black Mountain Institute and The Believer will soon announce their fall events, plus a new radio show and podcast, according to a representative for the arts organizations. Blackmountaininstitute.org; believermag.com.

With so many interactive events on tap, it might be easy to forget that The Believer is also an old-school paper magazine. For the price of $48, you can get a physical copy delivered six times a year, packed with intriguing essays, interviews, illustrations, poetry and more. Believermag.com/product/the-believer-subscription.