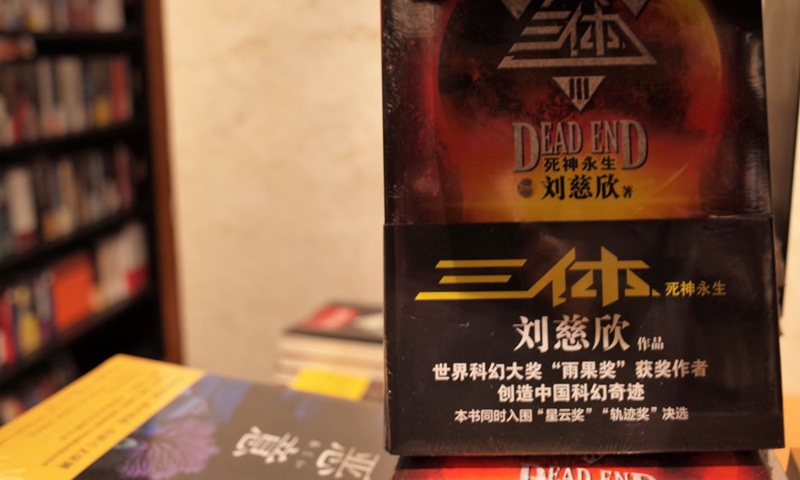 The third novel of The Three-Body Problem Photo: VCG

Since debuting in Japan on June 18, the Japanese-version of The Dark Forest has risen to the top spot on the best-selling science fiction books chart, while getting high ratings on Amazon Japan, leading to its inclusion on the platform’s list of “All the Best” 100 readers’ favorite novels.

This popularity comes as no surprise as the first book in the trilogy, Remembrance of Earth’s Past, became a huge hit after it launched in Japan in 2019. Four days after hitting stores, the Japanese press announced that the book had already reached its eighth printing.

Some Japanese celebrities have become fans of the Chinese science fiction series.

Japanese novelist Fukuda Kazuyo said in her recommendation of the book that she became so absorbed by it that she even forgot the deadline for her own novel.

Another Japanese writer, Kitahara Naohiko, was highly complementary of the work, saying that the book was so full of fantastical ideas that he couldn’t put it down.

Many reviews from Japanese readers show that they are very interested in the character of Shi Qiang, a police detective and counter-terrorism specialist, and his partners.

Nozomi Ohmori, one of the translators of the book, told the Future Affairs Administration, a Chinese new media account focusing on science fiction, that Japanese readers were longing to read more about Shi and his love interests such as Wang Miao, a nanomaterials researcher and academician at the Chinese Academy of Sciences.

Ohmori noted that Shi is the most popular character among Japanese readers and that it was very enjoyable to translate his dialogue.

Translation of the second book was carried out by four translators. After the other three would take care of the initial translation, Ohmori would handle the editing.

Shi Wenxue, a cultural critic based in Beijing, gave credit for the popularity of the work to Liu’s ideas as well as the efforts of these translators.

“The translation is another reason for its popularity. The publishing house invited famous Japanese translator Nozomi Ohmori to polish the words and made the book more readable and fluent to native readers.”

Shi told the Global Times that the popularity of the novel in Japan reflects the expanding influence of Chinese science fiction.

“The Japanese version is the 25th overseas version of the novel. Over the past decade, the book has sold more than 1.5 million copies abroad.”

Liu, winner of the 2015 Hugo Award, has written many renowned science fiction works such as The Wandering Earth, which was adapted into a film of the same name.

In addition to entering the film industry, his works have also been adapted in comic book form.

Four comic books featuring Liu’s stories were published in April as part of a plan to adapt 15 of his works.

The China CITIC Press told the Global Times on Tuesday that these comic books have been sold more than 100,000 copies over the past three months and received high reviews from readers.

“These comics can remind us of these brilliant stories and can help those who have difficulties understanding some of the words,” said a statement from the publishing house.

Spam Guisada Is Pandemic Cooking at Its Best