Reading past feminists, I understand how writing things down can be a political act | Books


The last session of TNIE’s Dakshin Literary Festival was one in which young Indian readers took great delight. The session featured some of the most celebrated children’s literature authors across India — Roopa Pai, Khyrunnisa A, Shobha Tharoor Srinivasan, Lakshmi Iyer and Laxmi Natraj. The five of them were in conversation with author and senior journalist Kaveree Bamzai about ‘Globalising South Indian tales for Children’.

The author of The Gita for Children and Vedas and Upanishads for Children, Pai spoke about how she grew up reading stories that she did not relate to, leading her to believe that her childhood wasn’t quite as colourful compared to the ones that the children in the West had. “I grew up reading Enid Blyton in whose’s books, the children’s lives were different. They never had parents around them and they were visiting places on their own, unlike me. I grew up feeling my life wasn’t probably as colourful as a British child’s childhood and that my food wasn’t as tasty as their ham, scones and gingerbread,” she says. However, she recalled how Target was the only magazine that featured stories of children like her. Despite writing quite a few books for children, she noted that it is, “still a struggle to get the information about those books out”. 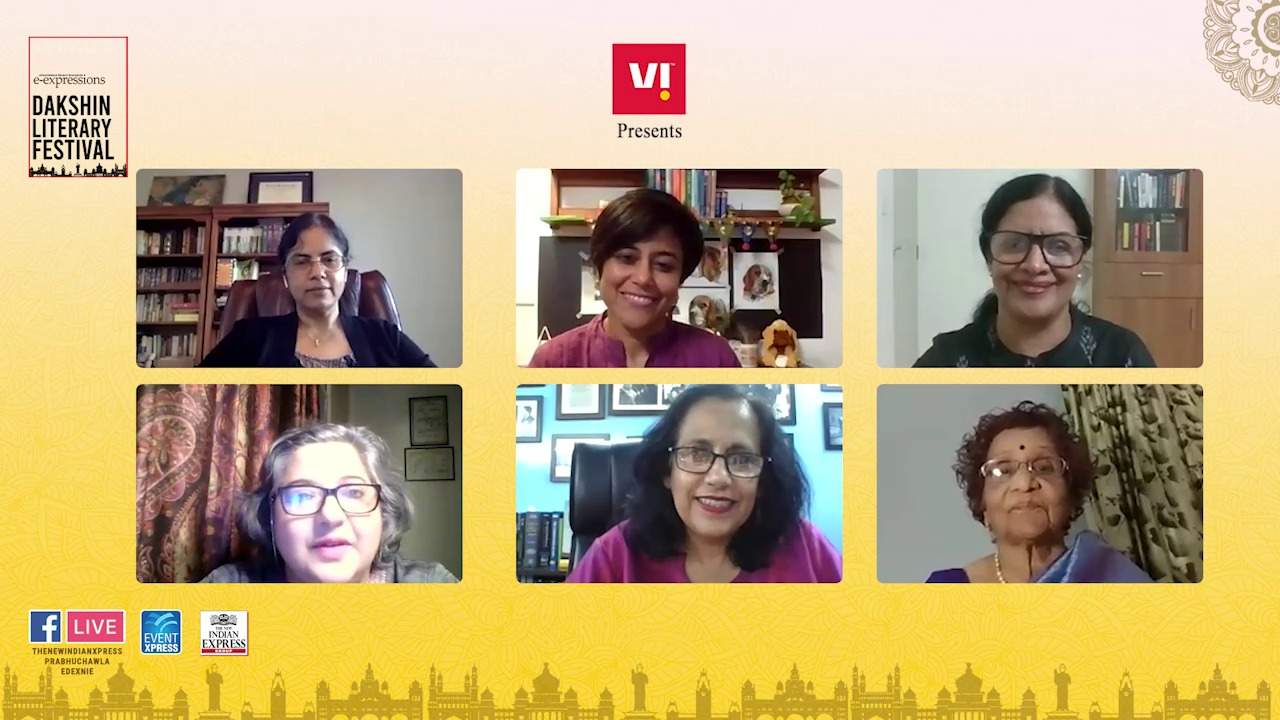 For Shobha Tharoor Srinivasan, an author and voiceover artist based in the US, the appeal of adventure, mystery, larger than life heroes are universal and quintessential for children. Someone who believes that there is no global divide these days, owing to the internet and technology, she finds similarities between India’s Panchatantra tales and Aesop’s Fables. She also spoke about her lockdown project of retelling Indian stories for audiences across the world. “The main job was to share our cultural heritage with children all around the world. I told one story a day for 70 days. People were very excited. In fact, at one point, I had 600 people listening to it,” she said, adding that the universality of stories is celebrated across borders.

Lakshmi Iyer, the author of Why is My Hair Curly, observed how her children’s school bookshelves in the US weren’t diverse and that, she says, was one of the reasons behind authoring her book. “There was always a subtle whitewashing and mainstreaming of stories that were set in India. They spoke of poverty and painful backstories. But I wanted to capture regular middle-class life with no backstory of pain, poverty or struggle,” she said.

On the other hand, Khyrunnisa said that her aim as an author was to make children laugh. “My books may not tell you about India or talk about issues, but they have hidden messages of camaraderie and respect for elders. But mostly, I want kids to laugh. They’re quite stressed out otherwise,” she said. She also said that taking Indian books to the global markets is the publisher’s job.

A teacher turned author, Laxmi Natraj started writing books with an aim to make children read more. “Initially, I was writing for very small children. I’m quite fond of them. I later shifted to science fiction and then to crime thrillers,” she said.

8 New Books We Recommend This Week

In defence of Literary ‘Snobbery’.

In defence of Literary ‘Snobbery’.