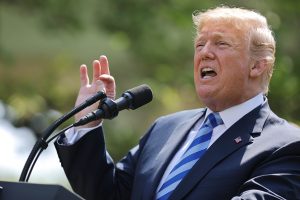 How many talk shows will Mary Trump appear on this week? Let’s go with all of them, since Justice Hal B. Greenwald of the Supreme Court of New York vacated the order barring her from doing publicity for her book Too Much and Never Enough: How My Family Created the World’s Most Dangerous Man (affiliate link).

Two weeks ago, Justice Greenwald dashed off a brief order restraining both Mary Trump and Simon & Schuster from publishing personal details about the Trump family, after the president’s brother Robert Trump sued claiming that they were in violation of a 2001 agreement settling litigation over Fred Trump Sr.’s estate. But after Appellate Division Justice Alan D. Scheinkman revoked the restraint against S & S, and strongly suggested that the order against Mary Trump herself ought to be revisited, Justice Greenwald has had second thoughts.

Having belatedly remembered that prior restraint on publication is really not a thing, His Honor then turned to plaintiff Robert Trump’s other arguments and found that — surprise! — they are garbage, too.

As proof that he would be irreparably harmed by his niece’s book, Robert Trump pointed to a clause in the settlement contract agreeing that the parties “will suffer irreparable damage and injury in event of any such breach,” an argument the court described as “[t]oo many words, with too many meanings.”

“Irreparable harm must be demonstrated, it is not obtained via a contract clause,” Justice Greenwald wrote. And in fact, he went went even further, speculating that the public itself would be irreparable harmed if the injunction were to deprive it of Mary Trump’s observations about the president.

The real possibility here is for S&S and the public to be irreparably harmed if the Book was enjoined.

The Appellate Court took a dim view of Robert Trump’s claims against S&S, which was obviously not a part to the litigation over Fred Trump Sr.’s will. And Justice Greenwald agreed, holding that “One cannot be held to breach a contract or specifically perform a contract that one is not a party to.”

Worse still for Robert Trump’s case was the court’s suggestion that the settlement agreement may not cover Mary Trump’s book at all. Donald Trump AHEM Robert Trump’s lawyer Charles Harder has promised to “pursue this case to the very end” and “seek the maximum remedies available by law for the enormous damages caused by Mary Trump’s breach of contract and Simon & Schuster’s intentional interference with that contract.” But unlike the public, Justice Greenwald has seen the sealed settlement agreement, and he doesn’t seem to think it applies to observations about the family.

Simply put. plaintiff claims the goal of the agreement was to prevent confidential information from being released. Was that so? Wasn’t the Agreement a stipulation to settle multiple lawsuits? Make payments to several parties? There was no specific consideration given to anyone for confidentiality. The consideration was provided to settle disputes. The parties agreed to keep the settlement under seal. That’s it.

And even if the agreement did apply to personal information about the family, Justice Greenwald seems to suggest that the the public interest in Donald Trump may well override the obligations of a twenty-year-old contract, noting that “Trump family relationships may be more interesting now in 2020 with a Presidential election on the horizon.”

So, all in all, not a great day for the president and his brother. But Mary Trump’s book is currently the number one book on Amazon’s bestseller list, so at least someone in the family is winning bigly.

Elizabeth Dye (@5DollarFeminist) lives in Baltimore where she writes about law and politics.

Get Cooking with Cross Infinite World’s License of Since I Was Abandoned After Reincarnating, I Will Cook With My Fluffy Friends: The Figurehead Queen Is Strongest At Her Own Pace Light Novel Series

The joy of discovering forgotten works by literary greats

Can you ‘write’ rollercoaster of COVID? A book awaits.