Ubisoft is unveiling its new science fiction battle royale game called Hyper Scape, where 100 players battle each other in first-person combat to be the last one standing while the audience tries to influence the outcome.

Such free-to-play battle royale games are a hot trend in the game industry during the pandemic, as the barrier to get into the games is low for new players. Call of Duty: Warzone saw more than 60 million downloads in two months, and Electronic Arts has been busy updating its Apex Legends battle royale game. And Fortnite and PlayerUnknown’s Battlegrounds continue to have huge audiences.

This game is Ubisoft’s first battle royale game, and creative director J-C Guyot said in a press briefing that Ubisoft Montreal has been building the free-to-play game for two years. While Hyper Space will debut on the PC, PlayStation 5, and Xbox One at an undisclosed date, the first tech test is available now on the PC in parts of North America and Europe to see how the game can handle large numbers of players. The technical test runs from today through July 7. Some details leaked last week. I checked it out at an Ubisoft online event.

The audience participation part is a new trend. ControlZee announced today it is making a game that streamers can play with their followers. And Retroit is a street-driving game similar to Grand Theft Auto where the viewers can drop things into the game to either mess up or aid drivers. SOS tried to do similar audience participation in a Survivor-like show.

Hyper Scape takes place in 2054. By that time, the internet has morphed into a virtual world dubbed “The Hyper Scape.” It’s a portal to the future (a kind of Metaverse, or virtual universe) where you work, learn, or play, said Guyot. The first map is a virtual city dubbed Neo Arcadia. It looks a bit like Paris, but with a super-modern architectural style. The city has nine districts and nine landmarks. Each match can have 100 solo players or 33 teams of three players each.

“It’s a mixture of Rainbow Six meets Assassin’s Creed,” said Graeme Jennings, a senior producer at Ubisoft, in an interview with GamesBeat. 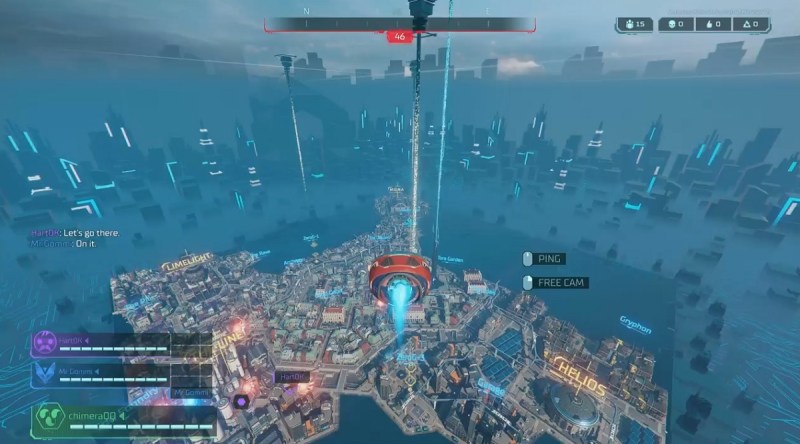 When you dive into the arena, you are in a “personalized deployment pod.” As you near the ground, the pod opens and you can land on your feet, without a parachute. (This is the future, after all). You start with just a club as a weapon, so you have to hit the ground running. You can whack people with it, but the best thing to do is to find better weapons. You can do that by running around or looking for buildings with shimmering orange glass. Some areas have more gear than others.

You can jump far, but it’s easier to reach to the tops of buildings if you find booster pads that are sprinkled through the streets. 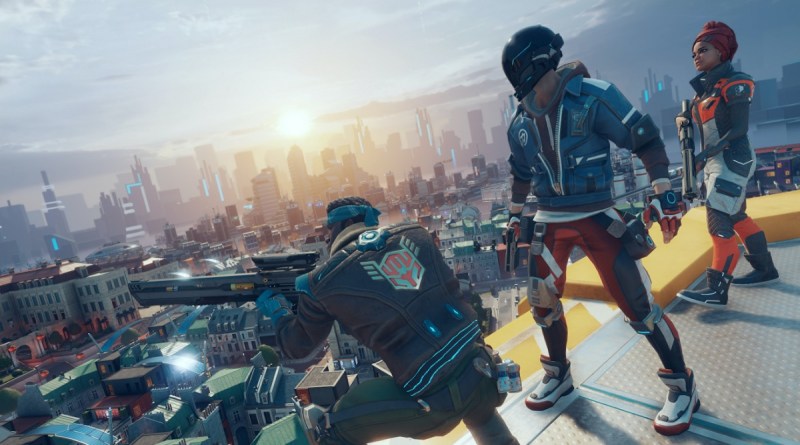 Above: You have to level up your sniper rifle to get a one-shot kill in Hyper Scape.

Jennings said Hyper Space has three key pillars. It takes place in an urban environment with vertical gameplay. You can fight in the interiors of the buildings or in the streets. You can also gather items dubbed “hacks,” or ability items that you can use periodically with a cool-down period, and use them at key moments to give you special abilities, like turning into a rolling iron ball. You can use a dash hack to jump in the air and crash down on enemies. You can drop mines or put up giant walls to protect your squad.

You want to make sure your squad is balanced in terms of the abilities it has across all of the hacks in the squad.

“Hacks really have the ability to change the game,” Guyot said. “These are tools for players to be more creative. At key moments, you make split-second decisions.”

If you get a weapon and find another of the same kind, you can pick it up and “fuse” them. Fusing levels up the weapon so it is more powerful. You can have two hacks and two weapons at any given time. If you fuse a lot of weapons, you can level up a sniper rifle to 5, and that will enable you to get a kill with a single headshot.

The game has two modes: Crown Rush for squad play and Dark Haze Solo for solo players. In the latter mode, you play in the dark. The test will feature 10 tiers of the battle pass (which players get for free), nine weapons, and nine hacks.

The life-changing magic of cooking