A one-of-a-kind endeavor to help elections officials in every state safeguard their systems against hacking is nearly complete, just months ahead of the Nov. 3 presidential election.

USC experts on the project say they are about to launch a new effort: helping voters more easily access election information, including voter registration, their ballot options, polling places and the locations of ballot drop boxes. More details will be released soon.

“While we are focusing on cybersecurity issues in the presidential campaign, this is an issue that will continue for years to come,” said Geoffrey Cowan, director of the Center on Communication Leadership and Policy at the USC Annenberg School for Communication and Journalism.

“After the election, we plan to continue the project by learning lessons from 2020, consolidating the relationships we have built around the country and spending at least the next year educating those who will be involved in the political campaigns that will be held in 2021.”

In the meantime, the center is on course to complete its year leading the USC Election Cybersecurity Initiative with researchers at six USC schools: USC Annenberg, as well as the USC Dornsife College of Letters, Arts and Sciences; the USC Gould School of Law; the USC Marshall School of Business; the USC Price School of Public Policy; and the USC Viterbi School of Engineering.

Funded by Google, the cybersecurity project entails state-by-state workshops to educate and raise awareness of cyberthreats for an audience of state and local elections officials, as well as for Democratic and Republican campaign managers and aides.

Like every organization that had planned to hold conferences this year, the USC Election Cybersecurity Initiative had to change course in mid-March and host the rest of its state meetings online as the novel coronavirus began spreading through the country.

“Democracy is under attack by adversaries foreign and domestic.

The USC experts have been joined by researchers from collaborative colleges and universities around the country. Together, they have described the cyberthreats facing U.S. elections and campaigns, how to buttress security even on an individual election worker basis and how to communicate with the public when a crisis strikes. The Associated Press also has been a key partner in planning the workshops.

Altogether, an estimated 3,000 people have appeared at the workshops, and there are still eight left. People are hungry for information to protect against disinformation and hacking, said Adam Clayton Powell III, executive director of the initiative and a director of Washington programs for the Center on Communication Leadership and Policy.

“Democracy is under attack by adversaries foreign and domestic,” he said. “And helping to defend democracy against those attacks, and those attackers is the purpose of this initiative.”

Cyberattacks aren’t the only security concern as 2020 election looms

Cyberattacks on elections systems and campaign operations are on the rise, and Powell noted that many state and local officials have shared numerous concerns about this year’s elections. 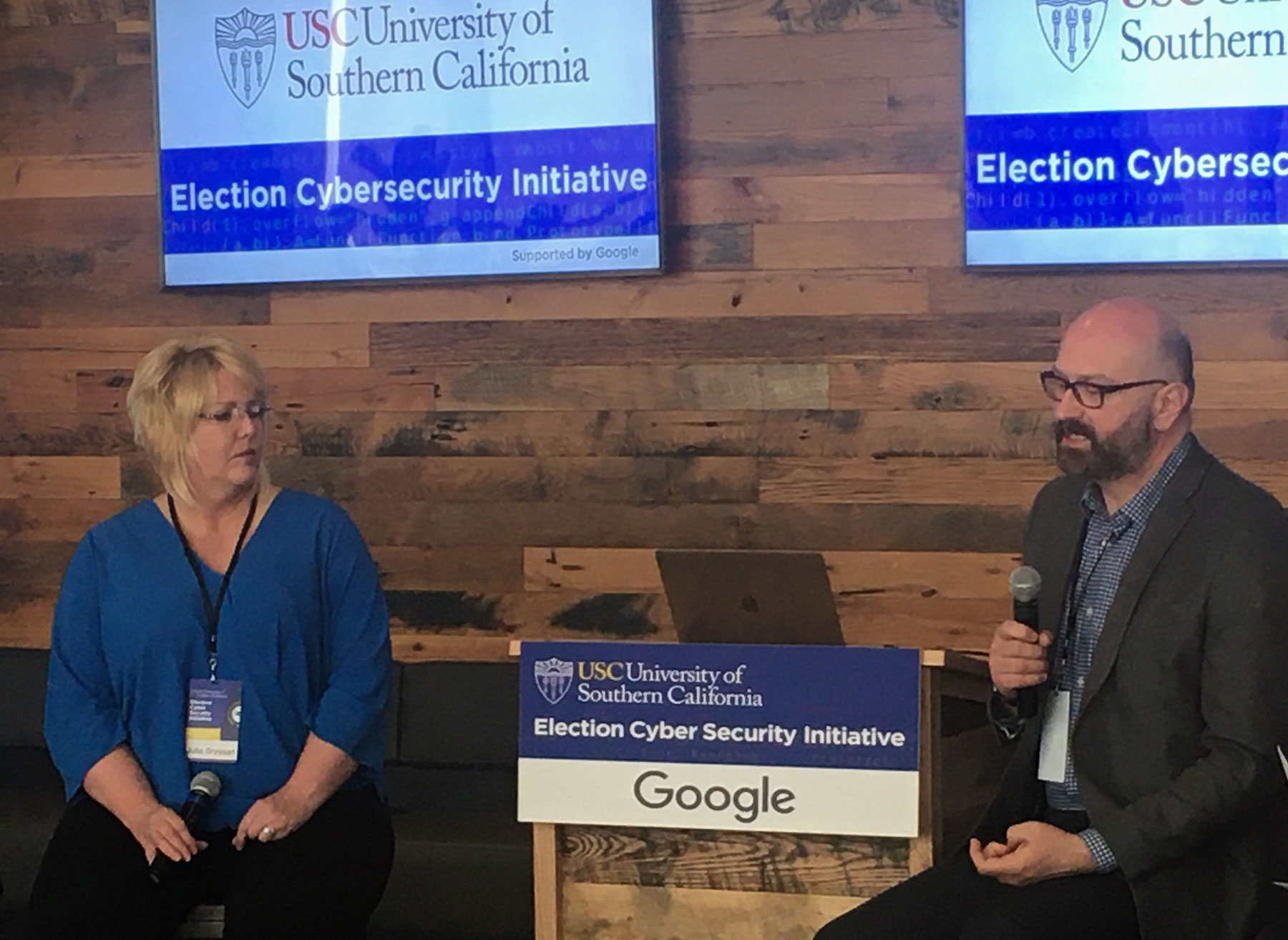 “Political parties advise prospective candidates to have their cyber defenses in place  before  they announce, because they will be attacked as soon as they are candidates,” he said.

“They need to make certain their defenses are at high standards at all times.”

Campaigns also need to make sure the proper security is in place for staff working at home. “Working remotely, with personal laptops and phones, is inherently less secure than working in an office with secured equipment and networks,” Powell added.

Because election dates, polling places and voting methods are changing by the day, campaign and election workers want to ensure that voters know how, when and where they can vote safely and that their votes will be counted during a pandemic-era election.

Since January, USC experts have shifted their discussions to more recent problems that threaten election security, such as changes in protocol at the U.S. Postal Service. The experts can advise officials on potential solutions and have been flagging any possible election trouble to raise awareness.

“We have added new sections to every workshop dealing with security precautions needed by campaign and election workers — and everyone else — when working remotely, using new best practices from the U.S. Department of Homeland Security, the National Security Administration and other security agencies,” Powell said.

USC experts to finish their virtual cybersecurity tour in California

The fleet of experts leading the workshops include USC Viterbi Associate Professor Clifford Neuman and the USC Information Sciences Institute. A computer systems security expert, Neuman said attackers try to weaken security on multiple fronts. Some reduce public trust by spreading disinformation via social media sites. Others try to hack elections systems to disrupt voting and vote counts at every level of government.

“More directly, U.S. adversaries can manipulate elections by targeting the ballot recording and counting infrastructure,” he said. “They can also target voters by email and phone by sending misleading information about polling places or mail-in deadlines. Cyberattacks can be mounted to create longer lines at polling locations or to shut down locations in targeted communities. The threat is very concerning.”

Everyone everywhere knows this is a front-burner priority.

In the initiative’s final stretch, Powell, Neuman and the other experts will round out the now-virtual tour over the next six weeks by hosting workshops for elections and campaign officials in Tennessee, Michigan, New York, Indiana, Minnesota, Arizona, West Virginia and Hawaii, in that order. The tour will conclude on Oct. 13 with a final event for California.

Powell also said that the workshops have been mutually beneficial: The USC experts have learned from state and local officials, too.

“We see the 50 states are all very, very different in how they approach elections and election security, but everyone everywhere knows this is a front-burner priority,” he said. “The USC initiative will continue in 2021 with activity and programming based on lessons learned from the 2020 election — including and especially what happens in November.”

Review: Vendela Vida’s ode to teen strife could have been a great San Francisco novel

Three Key Lessons Learned from One Hotel’s IT Infrastructure Journey