Margaret Josephs says her mom is ‘proud’ of her new book 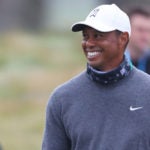 Tiger Woods during a Tuesday practice round at the PGA Championship.

Ed. note: We’ve heard the chanting outside our windows, at odd hours of the day and night, so here it is: the second of eight installments of Bamberger Briefly, PGA Championship-style. Read the first piece, on player-caddie relationships, here.

Tiger said last year that he’s writing a book called Back. He’s working (I’ve been told reliably) with the writer J.R. Moehringer. Tiger could not have chosen a better writing partner, even though Moehringer will likely take no credit here. Moehringer’s name does not appear anywhere near the cover of two other memoirs with which he has helped, Andre Agassi’s Open and Phil Knight’s Shoe Dog. Harding Park is in San Francisco. Moehringer lives in San Francisco. So does his wife, Shannon Welch, who will edit Back.

Moehringer is not someone who is part of the PGA Tour golf scene. Does not matter. His beat is the human condition.

Among American athletes, who would you put at Tiger’s level? Ali. Jordan. Phelps. Not too many others.

The ESPN documentary about Michael Jordan and his six NBA titles with the Chicago Bulls, The Last Dance, was intensely interesting because we, his public, got to see Jordan as never before. The doc wasn’t Jordan doing his Republicans-buy-sneakers bit. We saw Jordan as combative, manipulative, loving, hating, obsessive, driven, satisfied, dissatisfied. I suspect Tiger shares every one of those qualities, but he hides them as best he can.

At his Tuesday press conference, through Zoom magic, after mentioning Moehringer in a preamble, I asked Tiger how the book was coming along and whether he took any inspiration from The Last Dance.

When Tiger likes a question — and maybe the person posing it — he can offer deep nuanced answers. He can be profound. Shortly after his father died, a reporter asked Tiger to summarize his father in a single word. Tiger said, “Love.” Millions of words have been written about the Tiger-Earl relationship — and Tiger’s likely on-deck for about 30,000 himself in Back — but his one-word answer at Winged Foot in 2006 is the starting point and finishing point and something that’s been lost in much of what has been written about Tiger and Earl, about father and son.

“It’s been insightful,” Tiger said in response to my question. “I’ve enjoyed the process of looking back on some of the stories. It’s been a lot of fun.”

That’s interesting. Dorothy Parker liked to say, “I hate writing, but I love having written.”

Tiger might be saving his best stuff for the book.

Michael Bamberger writes for GOLF Magazine and contributes to GOLF.com. He also participates in podcasts, primarily in tandem with Alan Shipnuck. Earlier in his career, he was a senior writer for Sports Illustrated for 23 years and a reporter on The Philadelphia Inquirer for nine years before that. He has written a half-dozen books about golf and other subjects. His magazine work has been featured in multiple editions of The Best American Sports Writing. He holds a U.S. patent on a utility golf club called the E-Club. In 2016, he was given the Donald Ross Award by the American Society of Golf Course Architects, the organization’s highest honor.

Keep the capitalism of the poor alive